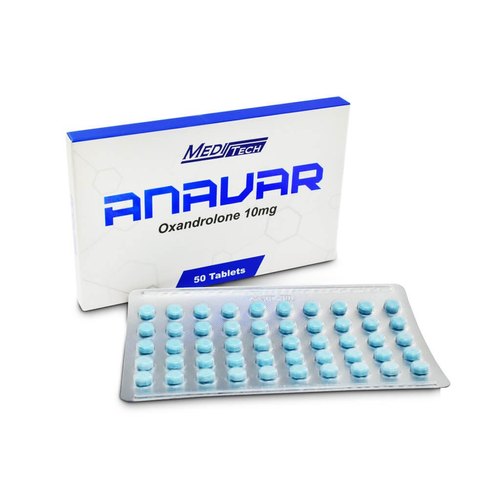 Oxandrolone, sold under the brand names Oxandrin and Anavar, among others, is an androgen and anabolic steroid (AAS) medication which is used to help promote weight gain in various situations, to help offset protein catabolism caused by long-term corticosteroid therapy, to support recovery from severe burns, to treat bone pain associated with osteoporosis, to aid in the development of girls with Turner syndrome, and for other indications.

Anavar is chemically related to testosterone and was first synthesized by Raphael Pappo and Christopher J. Jung while at Searle Laboratories (now part of Pfizer). The researchers first described the drug in 1962 and  were immediately interested in its very weak androgenic effects relative to its anabolic effects. In 1964, Anavar was introduced as a pharmaceutical drug in the United States. However, in 1989 due to bad media coverage from its illicit use by bodybuilders, production of Anavar was discontinued by Searle Laboratories.

Drug testing is only one component of a comprehensive drug-free workplace program, which also includes a written policy that clearly outlines employer expectations regarding drug use; training for supervisors on the signs and symptoms of drug use and their role in enforcing the policy; education for employees about the dangers of drug use.

In order to fully grasp drug detection time, it is important to understand the concept of half life. The elimination half-life of a drug is a pharmacokinetic parameter that is defined as the time it takes for the concentration of the drug in the plasma or the total amount in the body to be reduced by 50%. In other words, after one half-life, the concentration of the drug in the body will be half of the starting dose.

There are five main factors that determine exactly how long Anavar will stay in your system they include;

Time of Anavar Use: This one’s pretty simple. If someone’s been using Anavar continuously for a long period of time then the drug detection period is longer. Simply put – longer cycles mean a longer half-life and detection time.

Fat Solubility: Looking at anabolic steroids like Anavar on a chemical level, it’s important to remember that they are lipids. This means that they are fat soluble and can be stored in a person’s fat deposits.  Some steroids are more prone to this than others. As a general rule to remember, the more fat soluble a brand of Anavar is the longer its detection time will be.

Method of Ingestion: Anavar is mainly administered orally and steroids metabolize more quickly when taken orally. Consequently, the detection time of oral steroids is much shorter than steroids that are injected.

Size of the Anavar Dose: This one explains itself pretty well. Larger does equals larger detection time. In general, higher doses and more frequent use are associated with longer detection times.

Ease of Metabolization: As you’ve probably gathered, every anabolic steroid has different chemical structure. Anavar is an agonist of the androgen receptor, similar to androgens such as testosterone and DHT. Anavar is unique because it has great oral bioavailability (can be taken my mouth) and is resistant to liver metabolism. Anavar also does not get aromatized into estrogen compared to testosterone.

Studies have shown that after oral administration of a 10 mg dose of Anavar to man, the major compound excreted in urine, was detected within 72 hr after administration. During this period 35.8 and 8.4% of the administered dose was excreted as unchanged oxandrolone and 17-epioxandrolone.

The half-life of Anavar (Oxandrolone) is approximately 8 hours and Anavar can be detected in the system for up to 3-4 weeks after last use.  However, individuals who are older than 40, should expect a long drug elimination time because one of the most important pharmacokinetic changes associated with aging is decreased renal elimination of drugs.

How to Detox the Body From Anavar

Stopping Anavar is always the right choice, but how you quit could carry some risks. In some cases, sudden or “cold turkey” abstinence is not advisable. To be safe, meet with a doctor or addiction treatment professional so that you understand the potential risks of quitting anabolic steroid.

Anavar withdrawal symptoms can include loss of appetite, tiredness, restlessness, insomnia, mood swings, and depression. People who decide to end their Anavar use may experience withdrawal symptoms if their bodies have adapted to the drug’s presence (known as dependence).

The term “detox” is often used casually to refer to clean eating, drinking water, fasting, and generally flushing “toxins” out of the system. For a very casual Anavar user who wants to feel healthy, a period of drinking a lot of water, eating well, and not using Anavar may be enough for them to feel like they’ve detoxed their bodies. However, in the case of physical dependence on Anavar, “detox” refers to the set of interventions used to manage the body’s readjustment to not having the drug; this readjustment is known as withdrawal, and it can be an extremely dangerous time, depending on the brand on which the person is dependent and how long he has been using it.

Individuals should seek treatment for structure, support and encouragement while their hormones and various brain receptors return to a normal level to help prevent relapse. Treatment also provides relapse prevention skills, stress management, and education on the disease of addiction. SEE: How To Spot Fake Anavar (Oxandrolone)