Excedrin is a pain relieving  drug  which contains mainly acetaminophen, aspirin as well as other active ingredients. Aspirin and acetaminophen relieve pain by keeping your body from making certain natural substances. Caffeine in some products helps increase the effects of aspirin and acetaminophen. It is used to temporarily relieve minor aches and pains due to: headache – a cold – arthritis – muscular aches – toothache – premenstrual & menstrual cramps.

The main active ingredient in this drug is acetaminophen, an analgesic and an antipyretic drug. It’s not an NSAID. In other words, it’s not an anti-inflammatory drug. It does not help reduce swelling or inflammation.  It works by blocking cyclooxygenase (COX) enzymes. These help to form prostaglandins, which are pain- and inflammation-mediating signaling molecules. This would make acetaminophen similar to aspirin, or to ibuprofen and other nonsteroidal anti-inflammatory drugs (NSAIDs). 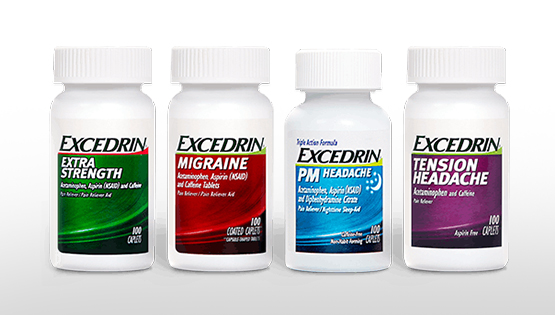 How Long Does Excedrin Stay In Your System?

The length of effects of different drugs vary greatly. The same is also true for how long a drug stays in the body’s systems, even after the effect has worn off. Some drugs will stay in your system for days; some months. How long Excedrin stays in your system depends on a number of factors which include:

Type of Excedrin: how long a Excedrin stays in your system depends on several factors, including the type of Excedrin used. Excedrin has been a leader in headache relief for more than 50 years, and the range of Excedrin products contains varying ingredients. For example Excedrin Migraine contains acetaminophen, aspirin, and therapeutically active caffeine, while Excedrin PM is an over the counter medication containing 3 ingredients: acetaminophen, aspirin, and diphenhydramine. Some drugs are metabolized more rapidly, while others take days to be entirely eliminated from the body.

Amount of Drug: another factor that affects how long Excedrin stay in your body is the amount of the drug. For example, short-term use of a drug and smaller amounts might be detectable for a short period. On the other hand, heavy use can lead to longer detection times.

Drug’s Half-Life: Different ingredients in Excedrin have different half-lives. For example, diphenhydramine is excreted in the urine, unchanged, and has a half-life of 3.4-9.2h, while caffeine has a half-life of about 5 hours. Someone who consumes 40 milligrams (mg) of caffeine will have 20 mg remaining in their system after 5 hours.

Body Mass: This is also a factor in how long Excedrin can be detected in the body. Drugs can have longer detection times in people with higher body mass as some drugs accumulate in fatty tissues.

Metabolic Rate: Drug detection times can also depend on the person’s metabolic rate, which varies from person to person. Metabolic rate can be affected by age and some health conditions. In general, the higher the metabolic rate, the shorter the time Excedrin can be detected in the body.

The major active ingredient common to most Excedrin products are acetaminophen, aspirin. Acetaminophen is rapidly absorbed from the GI tract with peak plasma levels usually occurring at 2 hours and almost always by 4 hours. Acetaminophen for most people, has a half-life in the blood of 1.25 to 3 hours. All of the drug will have passed out through the urine within 24 hours. Note that this could take longer in someone who has a poor liver function.

It is reported that the aspirin concentration in blood reaches its peak approximately 20 min after oral administration in healthy volunteers, but the absorption and bioavailability of aspirin in AMI may be quite different. However, because platelets cannot generate new COX, the effects of aspirin last for the duration of the life of the platelet (≈10 days).It takes a full 10 days for aspirin’s effects from using Excedrin products to wear off after a person stops taking it.