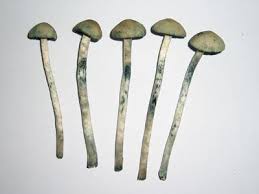 Classic hallucinogens are thought to produce their perception-altering effects by acting on neural circuits in the brain that use the neurotransmitter serotonin. Specifically, some of their most prominent effects occur in the area involved in mood, cognition, and perception as well as other regions important in regulating arousal and physiological responses to stress and panic.

What are Blue Meanies Mushrooms?

Blue Meanies Mushroom (Panaeolus cyanescens) or Copelandia cyanescens are sometimes referred to is a psychedelic mushroom a strain of Psilocybe cubensis. However, these mushrooms are different in a few ways. For one, these are the first species of mushroom that isn’t part of the Psilocybe genus, but instead, Panaeolus. They contain naturally-occurring psychoactive and hallucinogenic compound. In fact, these shroomies are some of the strongest in the world, with two to three times the amount of psilocybin and psilocin than cubensis.

Psilocybin, the psychedelic compound blue meanies mushroom, or shrooms contain can stay in your system for up to 15 hours, but that’s not set in stone. How long shrooms stay in your system depends on a lot of variables, from the quality of mushroom you ingest to things like your age and body composition. These things play a role in how long shrooms are detectable by a drug test, too. Here’s a look at the full timeline of blue meanies mushroom, including how long their effects last and their detection window.

How long does it take to feel the effects?

How long do the effects last?

Blue meanies mushroom trips typically last between 4 and 6 hours, though some people may feel effects a lot longer. After your trip, you’re likely to have some lingering effects that can last into the next day. Bad trips can be harder to shake off. Certain factors can make some effects linger longer and increase the likelihood of a comedown or hangover.

The factors that can affect the severity and duration of shrooms effects include:

Within 24 hours, though, most people go back to feeling like themselves.

How long is it detectable by a drug test?

It’s hard to give a definitive answer because there are so many different types of drug tests available, and some are a lot more sensitive than others. That said, most routine drug tests can’t detect shrooms. More specialized tests may be able to, though. The detection windows vary from test to test, too.

Most routine drug tests are urine tests. Most people’s bodies eliminate shrooms within 24 hours. That said, research shows that a trace amount may be detected in urine for a week in some people.

In general, though, shrooms don’t show up on most routine drug tests. The body also metabolizes shrooms too fast for them to show up in blood or saliva tests (unless the test is done within a few hours of consumption).

As for hair, hair follicle tests can detect shrooms for up to 90 days, but this type of testing isn’t common due to the cost.

Certain factors can affect how long shrooms hang around in your system. Many of these factors you can’t control.

Time between ingestion and testing

Hallucinogens like psilocybin are eliminated from the body quickly. Still, the time between ingesting shrooms and testing could be a factor — if the right type of test is used, of course. The sooner a drug test is performed after taking shrooms or any other substance, the higher the chances it can be detected.

The more psilocybin in the shroom, the longer it’ll hang around in the body. Blue meanies mushroom are some of the strongest in the world, with two to three times the amount of psilocybin and psilocin than cubensis.

Whether you consume it dried or fresh, scarf it down on its own, hide it in a burger, or drink it in tea, how you consume your Blue meanies mushroom does affects potency and how quickly it passes through your body.

Again, how much you consume plays a big role. The more you ingest, the longer Blue meanies mushroom will be in your body and possibly detectable.

Your metabolism and kidney and liver function slow with age, which can delay the excretion of psilocybin from your body. The older you are, the longer blue shrooms tend to stay in your system. This goes for other substances, too.

Every body is different. No two bodies process substances on exactly the same schedule. Things like your body mass index (BMI), metabolism, and water content all affect how quickly things are excreted from your body.

What’s in your belly

How much food and liquid is in your stomach when you take a dose of blue shrooms affects how long they hang around. The more food that’s in there when you do shrooms, the slower they’ll move through your digestive system. When it comes to water, hydration speeds up psilocybin excretion.

Are there any ways to get it out of your system faster?

Drinking water can help move it through your system a bit faster, but not enough to make a significant difference if you’re trying to avoid detection. Your best bet is to stop doing shrooms as soon as possible if you’re worried about detection. SEE: How Long Do Albino Penis Envy (APE) Stay in Your System?

Public Health Ng does not endorse the illegal use of any substances, and we recognize that abstaining is always the safest approach. However, we believe in providing accessible and accurate information to reduce the harm that can occur when using.