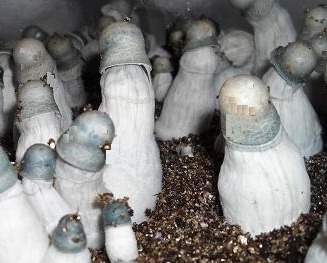 Psilocybin has been granted a breakthrough therapy designation by the FDA to be studied as a possible treatment for depression. Despite promising clinical application, psilocybin remains classified under Schedule I of the Controlled Substances Act and is illegal to possess or sell in the United States, though it has been decriminalized in some parts of the country, such as Oakland and Denver.

How Long Does It Take to Feel The Effects of Albino Penis Envy?

After ingesting psilocybin-containing mushrooms like Albino Penis Envy, it will take 20 to 40 minutes to start feeling the effects. By then, psilocybin will have broken down into psilocin, which acts on serotonin receptors in the brain. The effects peak at about 90 minutes to two hours after ingestion. The bulk of the effects are felt during the first six hours, which matches the timing of when the metabolite psilocin enters the bloodstream to be eliminated through the kidneys. Physical effects include nausea, yawning, headaches, and increased heart rate, blood pressure, and temperature. Mental effects include feeling relaxed and having introspective experiences that may feel spiritual, as well as unpleasant effects like nervousness, paranoia, and panic reactions.

Some studies and sources report that users can have long-term changes in personality, lasting for over a year. Some people who use psilocybin have reported flashback experiences long after taking mushrooms. Though typically not severe, there have been rare reports of people developing hallucinogen persisting perception disorder (HPPD) after taking mushrooms, and this requires further study.

Psilocybin is metabolized more quickly by some people than others. Dosage is a large factor, and so is frequency of use, weight, and age. The experience is highly determined by the person’s mindset and their physical setting, often referenced together as “set and setting.

A 2017 study of healthy adults found that the psilocin levels peak after about 80 minutes, corresponding with the average peak in effects after 90 minutes, but this varies across individuals. The immediate effects of using psilocybin wear off in six to 12 hours, though most people report continuing to feel the effects until they sleep and a “glow” the next day.

The standard five- and nine-panel drug tests ordered by most drug testing companies do not typically include tests for psilocybin, but some companies do offer urine tests for psilocybin and one of its metabolites, psilocin, that could be purchased by an employer or probation office. Only small traces of the drug are detectable by a urine test for up to 24 hours after ingestion.

Blood testing for psilocybin is much less common, but it may happen under some conditions. However, the detection window is very brief, which means that the test must be administered within hours after use.

Like many other substances, magic mushrooms can be found in hair follicles for up to 90 days. However, such tests may require larger hair samples in order to find detectable amounts of the substance.

Determining how long “shrooms” stay in your system can be tricky. The amount of time it takes for the body to excrete psilocybin depends on many variables.

Detection times are influenced by the species of mushroom. The type of psilocybin mushroom a person takes affects how quickly the metabolite is eliminated from the body. There are more than 100 magic mushroom species and they all have varying levels of psilocybin content, ranging from psilocybe liniformans (0.16%) to psilocybe tampanensis (0.68%) to psilocybe azurenscens (1.78%).

How soon psilocybin is eliminated from your body depends on dosage, frequency of use, type of mushroom, your metabolism, and factors such as your age, how much you weigh, your hydration level, and the health of your body systems.

Psilocybin is not tested for on the typical urine drug screen used by employers. If use is suspected, however, specific tests for it may be ordered.

How to Get Penis Envy  Mushrooms Out of Your System

Drug tests of psilocybin and psilocin involve screening urine samples using high-performance liquid chromatography or tandem mass spectrometry. The report is usually made available between four to eight days. The more shrooms you ingest, the longer the psilocybin remains and can be detected.

Drinking water can speed up the elimination of psilocybin, but not in a way that is significant for people trying to avoid detection on a drug test. The only way to get psilocybin out of your system is to discontinue use and allow your body time to metabolize and eliminate the substance.

Use caution whenever handling wild mushrooms. Make sure that you get all mushrooms that you pick yourself looked over by an expert before eating them to ensure proper identification. Even experienced mushroom hunters can mistake a highly poisonous mushroom for the one they intended to gather. Mushroom poisoning can result in catastrophic liver damage and death unless there is immediate access to a liver transplant.

While physical overdose on most correctly identified species of psilocybin-containing mushrooms is not likely, some people do have what is called a “bad trip,” in which they experience confusion, loss of awareness, and exposure to challenging psychological material. A bad trip is largely a product of set and setting, but can also be an indicator of a need for more in-depth psychological support. Many people find that bad or difficult trips are minimized through attending to their basic physical needs before and during the experience, keeping overstimulation to a minimum, using lower doses, and checking in with a trusted friend.

That said, psychedelic experiences may bring psychological material into your awareness that you find challenging, and it is also helpful to be aware of that in advance and have a plan for working with it. If you are someone with a trauma disorder or other ongoing psychological condition, speak to your psychologist before taking psilocybin.

While psilocybin may have a low potential for physical dependence, that does not mean that psychological addiction is not possible. While many people feel that a handful of psychedelic experiences are enough to get the healing benefits, some people who regularly take psilocybin may start to feel like their default reality does not compare and may seek to have as many psychedelic experiences as possible.

If you feel you may have a substance use disorder, talk to your doctor or speak to a mental health professional. There are different types of therapy that may be helpful, including harm reduction, psychotherapy, and cognitive-behavioral therapy. SEE: How Long Do Blue Meanies Mushroom Stay in Your System?

Public Health Ng does not endorse the illegal use of any substances, and we recognize that abstaining is always the safest approach. However, we believe in providing accessible and accurate information to reduce the harm that can occur when using.