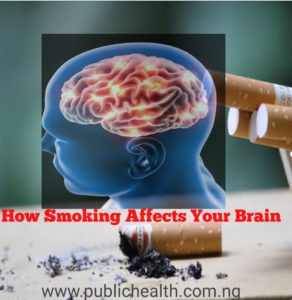 According, to the World Health Organization(WHO), Tobacco kills more than 7 million people each year. More than 6 million of those deaths are the result of direct tobacco use while around 890 000 are the result of non-smokers being exposed to second-hand smoke. Nicotine from smoking reaches the human brain in 7 to 10 seconds after smoke is inhaled. Nicotine has been found in every part of a smoker’s body, including breast milk. It’s also as addictive as heroin. In addition, Carbon monoxide, which is present in smoke quickly binds to hemoglobin in red blood cells, preventing these cells from carrying all of the oxygen they normally would. Although the brain represents just 2% of the body weight it accounts for about 20% of the total oxygen utilization of the body. Smoking affect the human brain in the following ways:

A review of the potential mechanisms of smoking and increased Alzheimer’s disease risk published by Elsevier indicates that previous and active smoking is related to a significantly increased risk for Alzheimer’s disease. The research noted that smoking is also associated with AD neuropathology in pre-clinical models and humans, as smoking-related cerebral oxidative stress is a potential mechanism promoting AD pathology and increased risk for AD.

Smoking of Any type Reduces Your IQ

Several studies have shown that smoking reduces your capacity to  analytically solve problems . This reduction in mental capacity is attributed to the reduced oxygen supply to the brain and increased presence of carbon mono-oxide in the hemoglobin due to smoking .SEE Does Nicotine Show Up On A Drug Test

The   increased presence of carbon mono-oxide in the hemoglobin and  reduced oxygen supply to the brain due to smoking also causes fatigue to creep in. The common myth that smoking enhances your ability to focus is far from the truth. A smoker often feel restless and fidgety due to impure or low oxygenated blood passing through the brain.

Studies have shown that smokers have a lower sex drive than normal men. One reason of course is the fatigue that sets into the body due to nervous stimulation caused by nicotine. In addition, the areas of brain responsible for sexual stimulation and sensation have lower receptors due to nicotine addiction induced by smoking. In addition, smoking has been linked to erectile dysfunction, azospermia and sterility and smoking at least one cigarette a week can increase menstrual symptoms including pain in women.

Smoking Inhibits The Natural “Feel Good” Receptors In Your Brain

The artificial stimulation of the areas of brain that control feelings of pleasure and reward causes the long term effect of reducing the receptors in this region. Several studies have shown that that smokers are more susceptible to depressive moods because of the reduction of “feel good” receptors in their brain.

Smoking can Increase Your Chances of a Brain Stroke

Excessive smoking leads to larger deposits of plagues on the arteries and the presence of nicotine in the blood makes it thicker causing  the arteries to lose their elasticity. This loss in elasticity significantly affect the supply of oxygenated blood from the heart to the body. When these arteries lose their elasticity or get blocked due to excess plague deposit, it results in a stroke. A study published in The American journal of Geriatric psychiatry  reported that many potentially cytotoxic compounds in cigarette smoke or their metabolites, can directly compromise neuronal and cellular membrane function of cerebral tissue. In humans, chronic cigarette smoking is associated with increased risk for atherosclerosis, ischemic and hemorrhagic stroke, cerebral white matter disease, and lipid peroxidation secondary to production of oxygen-derived free radicals.

It has been found that in patients suffering from multiple sclerosis the chances of brain shrinkage and lesions increases while smoking. Brain injury is caused by the breakdown of barrier between the brain and blood vessels. Studies have also revealed that smokers tend to develop problems with motor functioning with time, actions like walking or talking might get impacted through excessive smoking. Many smokers have experienced fidgety hands and stuttering speech after having smoked a few cigarettes in a short span of time. Read : Best Way To Stop Smoking

How 5G Networks Will Affect Healthcare

How Rohypnol Affects the Brain
How Does Smoking Affect Your Brain
July 5, 2018 Health FeaturesDr Otorkpa1 Comment