How 5G Networks Will Affect Healthcare 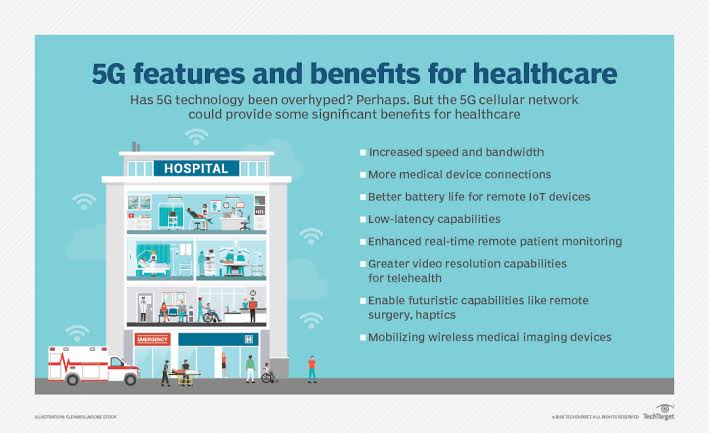 5G mid-band is the most widely deployed, in over 20 networks. Speeds in a 100 MHz band are usually 100-400 megabits. In the lab and occasionally in the field, speeds can go over a gigabit. Frequencies deployed are from 2.4 GHz to 4.2 GHz. Sprint and China Mobile are using 2.5 GHz spectrum. At the Mobile World Congress 2019 in Barcelona, Vodafone exhibited two new health telecoms technologies it has developed with 5G.

The company has partnered with Barcelona’s San Raffaele hospital to develop 5G ambulances which allow paramedics to stream real-time HD video support from remote specialists while transporting patients. The extremely low latency of Vodafone 5G has also been used to allow specialist clinicians to guide surgeons in the operating room, long-distance but in real-time.

Vilicom head of consultancy and solutions Rui Inacio says: “The potential for collaboration is obvious – you can imagine a revered surgeon in the United States guiding a junior surgeon in Australia through a tricky procedure.”

Over in China, 5G has enabled remote surgery to be performed using robotic arms, theoretically expanding patient access to highly specialised operations. In January 2019, a doctor in the southeastern province of Fuijan was able to remove the liver of a laboratory test animal from a remote location 30 miles from the operating theatre. Three months later, People’s Liberation Army General Hospital (PLAGH) chief physician Ling Zhipei took things a step further, operating on the brain of a Parkinson’s disease patient in Beijing from the PLAGH Hainan Hospital 3,000km away.

When someone suffers a stroke, oxygen flow to the brain is impeded. Every second is critical. Imagine that a doctor could examine a patient in an ambulance remotely, and brain scans could be sent to the surgeon waiting to receive that patient.

This is quickly becoming real. At Barcelona’s San Raffaele hospital, researchers are developing 5G-equipped ambulances that will allow remote specialists to view a patient in real time and deliver instructions as efficiently as if they were in the vehicle.

At King’s College London, engineers are also focused on stroke victims: Using portable MRI equipment, a paramedic in an ambulance can scan a patient’s brain and upload the images to the cloud in seconds. A doctor can then review the images and give instructions on how to best position the patient’s head and body; a neurosurgeon can look at the same images and be ready to operate when the patient arrives.

5G will allow innovators to create technology that isn’t practical or feasible on existing networks. At New York University, engineers and physicians are testing a system for the visually impaired that detects obstacles and gives verbal cues through a headset or tactile cues through a haptic vest. Using 5G allows the system to map the world more accurately and with immediacy. “It operates in real time,” says Mahya Beheshti, an NYU physician-scientist. “It’s a completely smooth process.” Plus, 5G’s more efficient power usage means battery life is vastly improved, a critical feature for such devices.

Mischa Dohler, chair professor of wireless communications at King’s College, likes to say that 5G will lead to the “internet of skills”–that is, a system by which a person’s physical abilities can be wirelessly transferred. For example, a doctor in one location could train the hands of another somewhere else using haptic gloves. Or surgery could be performed remotely using robotic arms, only possible now using a fiber-optic connection.

To demonstrate 5G’s instantaneousness, Dohler, playing piano in Berlin, recently accompanied a livestreamed hologram of his daughter as she sang in London. He envisions those kinds of interactions taking place between specialists and hospital workers, or between patients and doctors located halfway around the world. “It’s like Skype on steroids,” he says.

With the new generation of wireless, face-to-face conversations can be held via phone or tablet as naturally as in person. Diagnoses can be made via live video chat, making the world’s best doctors available to people anywhere they live.

Still, the ability to democratize access to health care will hinge on infrastructure. “If you look at all the plans that carriers have today for deploying 5G, it’s mostly in urban areas,” says Monisha Ghosh, wireless communications researcher at the University of Chicago. “5G makes many things possible. The question is when the carriers will roll it out to rural areas”–where hospitals are closing and remote health care is desperately needed.

If 5G goes national quickly, it could be big news for startups like Seattle-based 98point6, whose app connects patients with doctors via text chat or video. “We’ve all had that experience where a mobile app fails us in a critical moment,” says chief technology officer Damon Lanphear. “And then you say, ‘Well, I’m not going to rely on this thing again.’ 5G has the potential to enhance that trust and let users feel like they can use our product when they need it, wherever they are.”

The data-rich environment once again highlights privacy issues. “It would require an extra level of awareness and very careful management,” says Muriel Médard, professor of electrical engineering at the Massachusetts Institute of Technology. But expect a solution, because the potential benefits of 5G are vast–and the opportunities for health care entrepreneurs seemingly endless.

6 Reasons to Utilize Automation in Healthcare

Who Are the Stakeholders in The Healthcare System?