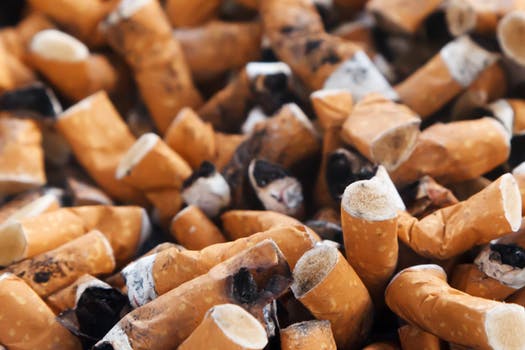 Smoking isn’t a new concept anywhere in the world as we come across people who smoke on daily basis either for pleasure, leisure or due to the weather conditions. In most cases, the habit of smoking is usually accompanied by alcohol intake which also adds to the health and social complications in the life of such smoker.Apart from the common effect of smoking which happens to be the risk factor on the lungs, there are other deadly complications that arrive as a result of smoking and drinking simultaneously. It is estimated that over 2.2% of death in Nigeria is caused by tobacco implicated death

Not only will a smoker be endangered to lungs problems but will also be prone to organs failure particularly the kidney and heart. Other risk factors associated with smoking is that smokers are more likely to develop cancer than a regular person, with the aid of alcohol intake, mental deficiency might also be imminent as it has been discovered that people who engage in smoking especially “marijuana” are likely to develop a short term delirium which is possible to become permanent at any point in time.

Other risk factors associated with smoking is that smokers are more likely to develop cancer than a regular person, with the aid of alcohol intake, mental deficiency might also be imminent as it has been discovered that people who engage in smoking especially “marijuana” are likely to develop a short term delirium which is possible to become permanent at any point in time.

While smoking causes the aforementioned effects, drinking also abates those effects in fact drinking of alcoholics can affect the kidney more than smoking can. According to a post made on Sidexblog, smokers and drinkers are also anemic this is because alcoholic beers are known to increase fat in the belly region of the body and this region encompasses the vital organs contained in the body.When these organs especially the heart develops excessive fat due to the alcohol intake, it becomes hard for it to function as normal and gradually develops a high blood pressure which could ultimately lead to sudden death.

Addiction to these substances is not something that happens all at ones, but one subsequently gets addicted to them either from being an occasional drinker/smoker to a hard drinker/smoker and then to an acute or chronic drinker where it becomes very hard to curb the habits. Read: How Does Smoking Affect Your Brain

Since these addictions happen consequently to the mental process. Cravings and urge for these substances become something of reflex rather than what is voluntary. Therefore, in order to overcome or reduce these addictions, one must not rely on just a helping process to stop addiction but should rather entreat some multi dynamic measures of which any of them could yield a positive result. Below are some best ways to stop smoking;

Minimization: Reducing the level of smoking or alcohol intake is the first step when trying to stop an addiction. As an addict, if you normally take 8-12 wraps of weeds daily or 5-10 bottles of beer, reduce it to half of what you usually take on a normal day. Practicing this step will force your body to adjust to a new routine of substance intake and then subsequently reduce that half to another half again. However, a good level of determination is required during this process.

Replacement: smoke and alcohol quitting is a very hard task, to begin with because these substances are already registered in the body system which makes it difficult to let go easily. But looking for complementary items that are less harmful compared to smoke and alcohol will serve as incentives to motivate the smoker. For a smoker, nicotine replacements like patches or nicotine gums and also non nicotine drugs like varenicline are effective for starting the quitting process.

On the other hand, alcohol addicts can use replacements like coffee, herbal drinks, and energy drinks. These replacements may not test exactly like alcohol but they give energy even better than alcoholic drinks can give.

Register with FGD Centers: engaging in focus group discussions will go a long way in helping you to quit the habit of smoking or drinking. Meeting like minded people will boost determination and make you enthusiastic with the smoke and alcohol quitting processes. Also, using the FGD therapy, you will be exposed to new information about the latest development on smoker/drinkers health.

Visit a social worker: social workers are professional carers and therapists. Apart from their popular areas of practice which are medical social work and community rehabilitation, Social workers also engage with clients on an individual basis otherwise known as social case work. Meeting a case worker is the second best method because these professionals are trained for problem-solving skills and they help to mobilize resources to help the client meet their goals and maximum functionality. You can find these professionals in hospitals and rehabilitation centers.

Religiosity: Smokers and alcoholics who have been able to quit smoking addiction successfully have testified to the role and impact of religion in the process of stopping the addiction. The major religious beliefs in the world are against smoking and drinking due to it mental implications and other ills that come with it. Therefore getting close to God or being spiritual increases piousness which will ultimately help to conquer the habits of smoking and drinking alcohol. Does Nicotine Show Up On A Drug Test

One can quit smoking naturally, all it takes is some dedicated mind set and following the steps outlined in this post.

Have you been able to overcome smoking? Please share your experience below