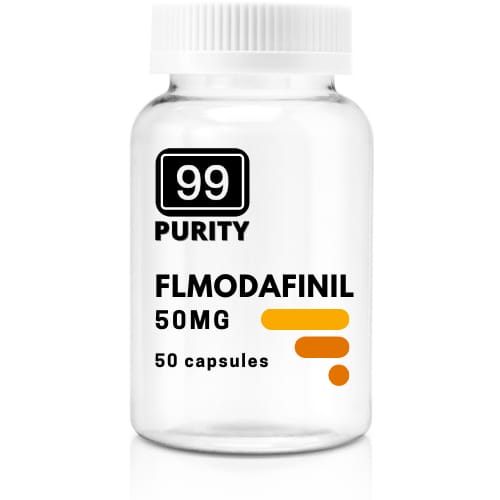 Flmodafinil also known as bisfluoromodafinil and lauflumide is an bisfluoro analog of modafinil. It is a eugeroic as well as a weak dopamine reuptake inhibitor. Its inventors claim that it is more effective than modafinil and adrafinil, with fewer side effects. It was patented in 2013, and Phase I clinical trials have been underway since December 2015.

Modafinil itself was originally developed in France by neurophysiologist professor Michel Jouvet and Lafon Laboratories. Modafinil originated with the late 1970s invention of a series of benzhydryl sulfinyl compounds, including adrafinil, which was first offered as an experimental treatment for narcolepsy in France in 1986. Modafinil came to the United States in 1998 under the name ‘Provigil’. It was initially granted FDA approval as a narcolepsy treatment. On a chemical level, Fladrafinil is an adrafinil derivative, specifically a bis(p-fluro) ring-substitute.

Not much is known about how Flmodafinil works. It is a wakefulness-promoting agent that is found in the eugeroic classification of drugs. It is very similar in its composition and effects to adrafinil a precursor drug to modafinil. Both are stimulants with no amphetamine-like effects. However, it induces an anti-aggressive response. It also affects additional or enhanced wakefulness which includes quickened cogitation. Flmodafinil boosts neural functioning, increases recollection, and heightens ambition. It achieves these effects by activity related to histamine and dopamine neurotransmitters.

How Long Does Flmodafinil Stay in your system?

Not much is also known about how long flmodafinil stays in the body, but is likely to behave like other analogs. Adrafinil for example is a precursor drug to modafinil, which means adrafinil is metabolized in the body to produce modafinil. Modafinil is rapidly absorbed but slowly cleared. It has fairly high protein binding and a Vd of 0.8 L/kg. Its half-life is 11 to 14 hours. Up to 60% of modafinil is converted into modafinil acid and modafinil sulfone, both of which are inactive metabolites.

Depending on various factors, urinary excretion of unchanged Modafinil ranges from 0 percent to 18.7 percent. Most Modafinil is excreted as one of two major circulating metabolites: modafinil acid or modafinil sulfone. Modafinil and its metabolites may be present at testable levels in the urine for up to 30 hours following ingestion.

Modafinil and modafinil acid can be tested for in plasma, serum, and urine. Modafinil is not usually tested for in routine drug screenings. Modafinil use is unlikely to cause false positives for stimulants such as amphetamines. Instrumental techniques using liquid chromatography or gas are employed to test for Modafinil in cases of automobile accidents and post-mortem analysis.

What are the side effects of flmodafinil?

As clinical trials continue, more information about this molecule will emerge, but the drug is reported to have little or no side effects when taken at the correct dose over a short period of time. Flmodafinil is ONLY designed and intended for short-term use. Nevertheless, it is likely to cause side effects that are similar to adrafinil and modafinil which include; Headache, nausea, nervousness, dizziness, or difficulty sleeping. If any of these effects persist or worsen, tell your doctor or pharmacist promptly.

Modafinil can make certain birth control less effective. Hormonal contraception (birth control pills, injections, implants, skin patches, and vaginal rings) may not be effective enough to prevent pregnancy during your treatment. Talk with your doctor about the best methods of birth control to use while taking modafinil. It is not known whether Flmodafinil passes into breast milk or if it could harm a nursing baby.

Flmodafinil is currently being marketed online as a supplement that offers alertness and motivation. This type of supplement is mostly unregulated. For example, Adrafinil does not currently have FDA approval and is thus unregulated in the United States. It was marketed in France and elsewhere in Europe under the trade name Olmifon until September 2011 when France’s FDA equivalent reassessed the drug and withdrew marketing permission. Flmodafinil supplements are available on Amazon but The U.S. Food and Drug Administration (FDA) does not have the authority to review dietary supplement products for safety and effectiveness before they are marketed.

However, it should be noted that modafinil and armodafinil similar drugs to flmodafinil are still considered a schedule 4 drug in the United States and illegal to possess without a prescription. Most countries treat flmodafinil more or less the same way due to their similarities in action and effects. SEE: How to Spot Fake Modafinil