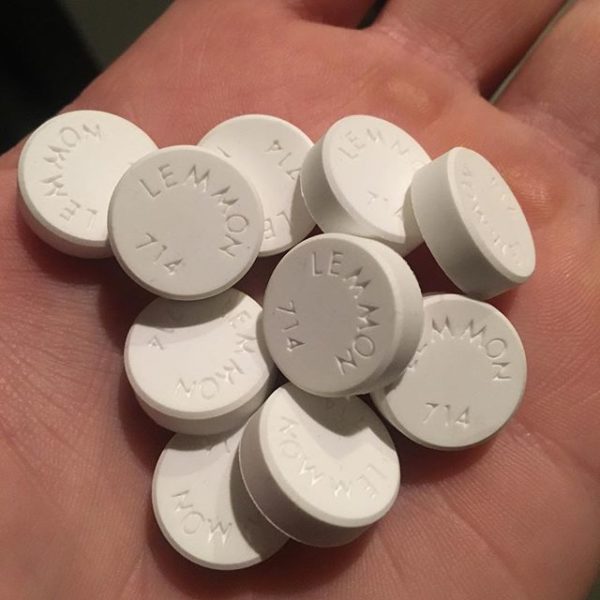 Lemmon 714 pill  is a brand of methaqualone  a sedative and hypnotic medication. Methaqualone was manufactured in the United States under the name Quaalude by the pharmaceutical firms Rorer and Lemmon with the numbers 714 stamped on the tablet, so people often referred to Quaalude as 714’s, “Lemmons”, or “Lemmon 7’s”. Methaqualone, was also manufactured in the US under the trade names Sopor and Parest. After the legal manufacture of the drug ended in the United States in 1982, underground laboratories in Mexico continued the illegal manufacture of methaqualone throughout the 1980s, continuing the use of the “714” stamp, until their popularity waned in the early 1990s. Drugs purported to be methaqualone are in a significant majority of cases found to be inert, or contain diphenhydramine or benzodiazepines.

Illicit methaqualone is one of the most commonly used recreational drugs in South Africa. Manufactured in clandestine, often in unsanitary conditions in India, it comes in tablet form, but is smoked with marijuana; this method of ingestion is known as “white pipe”. It is also popular elsewhere in Africa and in India.

Recently Lemmon 714 was in the news again after Bill Cosby admitted using them to drug women. This was because quaaludes or Lemmon 714 were a staple of the American recreational drug scene, one that “everyone remembers fondly.” It’s even been called an “icon of the 1970s,” before it was discontinued in 1985—in part because of its widespread illegal recreational use.

Lemmon 714 is a sedative that increases the activity of the GABA receptors in the brain and nervous system, similarly to benzodiazepines and barbiturates. When GABA activity is increased, blood pressure drops and breathing and pulse rates slow, leading to a state of deep relaxation. These properties explain why methaqualone was originally mainly prescribed for insomnia. Lemmon 714 peaks in the bloodstream within several hours, with a half-life of 20–60 hours. While the salt methaqualone hydrochloride is typically used clinically, methaqualone free-base was also marketed, namely as the methaqualone component of Mandrax, a combination drug which contained 250mg methaqualone and 25mg diphenhydramine within the same tablet. Oral dosage forms of methaqualone hydrochloride were manufactured as capsules, whereas oral dosage forms of methaqualone free-base were manufactured as tablets. Regular users build up a physical tolerance, requiring larger doses for the same effect.

Abuse of Lemmon 714 creates a barbiturate-type dependence. It is highly addictive and frequent users build a tolerance to it, meaning they need to take higher doses to achieve the same euphoric effect. This makes Lemmon 714 use dangerous, increasing the likelihood of an overdose or death. They can also cause withdrawal symptoms similar to barbiturates, which includes:

An overdose can lead to nervous system shutdown, coma and death. Additional effects are delirium, convulsions, hypertonia, hyperreflexia, vomiting, kidney failure, coma, and death through cardiac or respiratory arrest. It resembles barbiturate poisoning, but with increased motor difficulties and a lower incidence of cardiac or respiratory depression. The standard single tablet adult dose of Lemmon 714 brand of methaqualone was 300 mg when made by Lemmon. A dose of 8000 mg is lethal and a dose as little as 2000 mg could induce a coma if taken with an alcoholic beverage. SEE: How to Spot Fake Diazepam (Valium) Pills