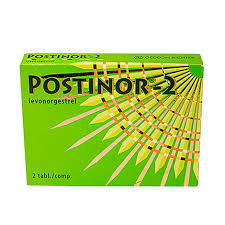 Postinor 2 is an emergency contraceptive pill or morning after pill that contains one common female hormone, levonorgestrel, a progestin. This hormone prevents pregnancy mainly by delaying or preventing ovulation (the release of an egg from the ovary), thus preventing fertilization.

Levonorgestrel is in a class of medications called progestins. It works by preventing the release of an egg from the ovary or preventing fertilization of the egg by sperm (male reproductive cells). It also may work by changing the lining of the uterus (womb) to prevent development of a pregnancy.

What is Postinor Used For?

Postinor 2 is used by women to prevent pregnancy after birth control failure (such as a broken condom) or unprotected sex. This medication is an emergency contraceptive and should not be used as a regular form of birth control. It is a progestin hormone that works mainly by preventing the release of an egg (ovulation) during your menstrual cycle. It also makes vaginal fluid thicker to help prevent sperm from reaching an egg (fertilization) and changes the lining of the uterus (womb) to prevent attachment of a fertilized egg. Using this medication will not stop an existing pregnancy or protect you or your partner against sexually transmitted diseases (such as HIV, gonorrhea, chlamydia).

This medication may not work well in women over a certain weight (for example, greater than 164 pounds or 74 kilograms), or if you have used certain other medications within the past month. This effect can result in pregnancy. Talk to your doctor for more details and to see if this medication is right for you (see also Drug Interactions section).

Check the ingredients on the label even if you have used the product before. The manufacturer may have changed the ingredients. Also, products with similar names may contain different active ingredient.

Dose advice: How to use Postinor-2

If you vomit within 2 hours of taking a tablet, talk to your doctor for an additional tablet.

You must take the second tablet exactly 12 hours after the first tablet. Work out a time when you will be able to take the second tablet (e.g. not in the middle of the night). This means you may have to delay the first dose, although the sooner the first tablet is taken, the greater the chance of the treatment being effective. Postinor-2 can be taken at any time during the menstrual cycle, unless the menstrual period is late.

You should have a follow-up with your doctor within 3 weeks of taking Postinor-2 .

Postinor-2 will not prevent you from contracting any sexually transmitted diseases.

Your next menstrual period is likely to arrive on time. However, it may be slightly early or late. If it is more than 1 week late, or if it is unusually light, perform a pregnancy test.

If you do not have a menstrual period after 3 weeks of taking Postinor-2, you may be pregnant. Consult your doctor.

Postinor-2 is intended as an emergency measure. If you need to take repeated doses, you should talk to your doctor about using long-term methods of contraception instead.

Postinor-2 should not be taken under certain conditions. Tell your doctor if you have any of the following:

Care must be taken when using Postinor-2 under certain circumstances. Tell your doctor if you have any of the following:

The uterus or womb is a major female hormone-responsive secondary sex organ of the female reproductive system. The lower end of the uterus, the cervix, opens into the vagina. The womb, is the place where a baby grows when a woman is pregnant. Too much of postinor 2 will weaken the wall of the womb and damage the uterus. This will cause miscarriages in the future. Many of the menstrual disharmonies, such as painful periods, endometriosis, dysfunctional uterine bleeding and infertility can be avoided by taking better care and observing the right precautions when using Postinor 2.

The first sign of a problem with the uterus may be bleeding between periods or after sex. Causes can include hormones, thyroid problems, fibroids, polyps, cancer, infection, or pregnancy. READ: Does Abortion Pills Damage the Womb

Postinor-2 is identified in breast milk. It is not recommended for use in breastfeeding women. SEE: Gynaecosid

Does Abortion Pills Damage the Womb?

Difference Between Postpill vs Postinor 2
Effects Of Postinor 2 on the Womb
June 1, 2022 Women's HealthPublic HealthLeave a comment