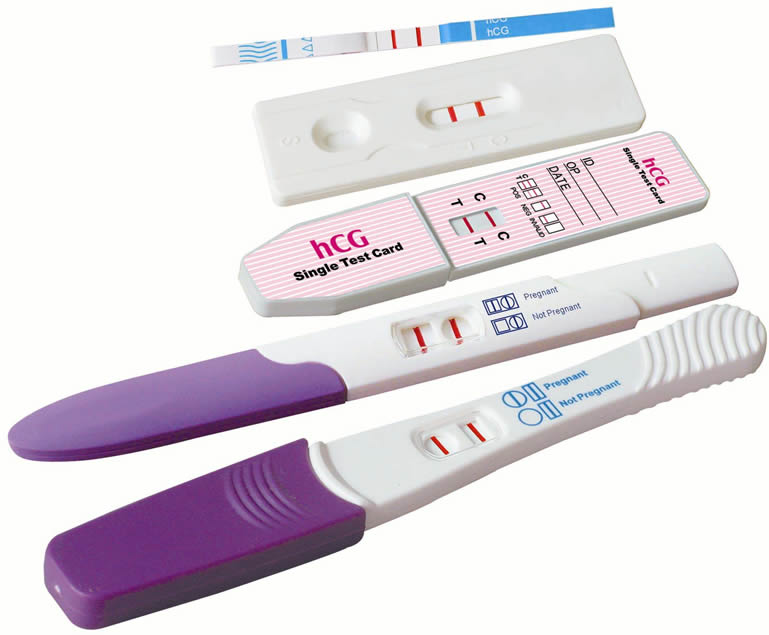 A pregnancy test is used to determine whether a woman is pregnant. The two primary methods are: 1 testing for human pregnancy hormone in blood or urine and 2 ultrasonography. Testing blood for human chorionic gonadotropin (hCG)  results in the earliest detection of pregnancy.

A pregnancy test works by measuring the amount of HCG hormone. HCG levels increase during pregnancy. HCG is known as the pregnancy hormone, because it is produced by the cells that form the placenta and provide nourishment to the growing embryo.

It is released when a fertilized egg attaches itself to the lining of the uterus.

HCG can be present in the blood and urine around 10 to 14 days after conception. It peaks between 8 and 11 weeks of gestation.

When a woman is pregnant, her body produces a special pregnancy hormone known as hCG (human Chorionic Gonadotropin). This hormone appears in the urine as early as the first day of a missed menstrual cycle. A positive result indicates that your urine contains hCG and you can assume you are pregnant. A negative result means that no hCG has been detected and you can assume you are not pregnant.

What if the testing line is very light in color, am I pregnant?
Yes. You should assume you are pregnant. The exact color of the lines is not important.

What should I do if the test result is negative and I still suspect that I am pregnant?
You may have miscalculated when your period was due. If your period does not start within a week, repeat the test. If you still get a negative result and your period has not started, you should see your doctor.

What factors can give false positive results?
A positive result may be seen if you had a miscarriage or have given birth within the past 8 weeks (since hCG may still be in your system). Certain drugs which contain hCG or that are used in combination with hCG (such as Pregnyl, Profasi, Pergonal, APL) and some rare medical conditions such as trophoblastic disease, Islet cell tumors, and some carcinomas can also give false positive results. In these cases, you should ask your doctor for help interpreting your test results.

Yes , home pregnancy tests of all varieties, including digital and early response options have expiration dates. These dates are typically stamped on the box the tests come in as well as the individual wrapping of each test.

Can you use expired pregnancy tests?

Even though an expired pregnancy test could give you an accurate result, experts agree that you shouldn’t take a chance. In general, pregnancy tests that are past their expiration date are more likely to give you a false negative or a false positive reading. So it’s not a good idea to use them.

Do pregnancy tests work after 12 weeks?

In the United States, most people discover that they’re pregnant within 5 to 12 weeks after conception. After missing a period, a home pregnancy test will generally indicate a “positive” result. Further urine testing, a blood test, and an ultrasound at an OB-GYN will then confirm the pregnancy.