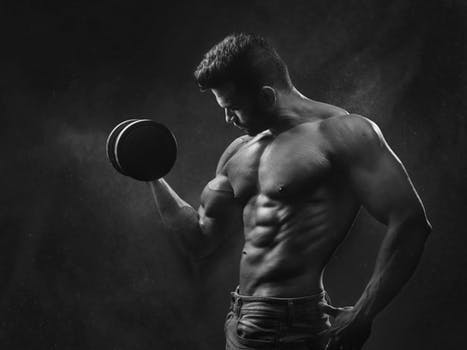 Creatine is a nitrogenous organic acid synthesized primarily in the liver and kidneys. It occurs naturally in vertebrates where it facilitates the recycling of adenosine triphosphate (ATP), the energy currency of the cell, primarily in muscle and brain tissue. Creatine also acts as a pH buffer in tissues. Creatine  is available in flavored powders  supplements used by many including athletes to build body cell mass and to increase the body’s ability to produce energy rapidly this explains why Arnold blueprint to mass recommends it . Using creatine is not recommended if you have kidney problems. That’s because your kidneys excrete creatinine, a breakdown product of creatine. Persons under age 18 should also avoid creatine, according to Jim King, M.D., president of the American Academy of Family Physicians. “Children are still in a growing phase, and we’re not sure what impact creatine may have on muscles and bones as they grow,” he says. “I feel very strongly that middle and even high schoolers shouldn’t use it.” See Creatine vs Creatinine An Overview

Benefits and Side Effects Creatine  Supplement

Although Creatine like legal steroids appear to modestly improve upper body strength and lower body strength in both younger and older adults, the efficacy of Creatine  for high-intensity, explosive exercises like sprinting is yet to be scientifically established. A study published in Physiological reviews  reported that human pathology, and clinical diagnosis suggest that deregulation of the creatine kinase (CK) system is associated with a variety of diseases. Disturbances of the CK system have been observed in muscle, brain, cardiac, and renal diseases as well as in cancer. On the other hand, creatine and creatinine analogs such as cyclocreatine were found to have antitumor, antiviral, and antidiabetic effects and protect tissues from hypoxic, ischemic, neurodegenerative, or muscle damage. Oral Creatine ingestion is used in sports as an ergogenic aid, and some data suggest that creatine and creatinine may be precursors of food mutagens and uremic toxins. The side effects and health risk of Creatine supplementation include:

-Increased risk of muscle, brain, cardiac, and renal diseases as well as in cancer

-Higher doses of Creatine could adversely affect the kidney, liver, or heart function.

-Creatine supplementation can cause compartment syndrome