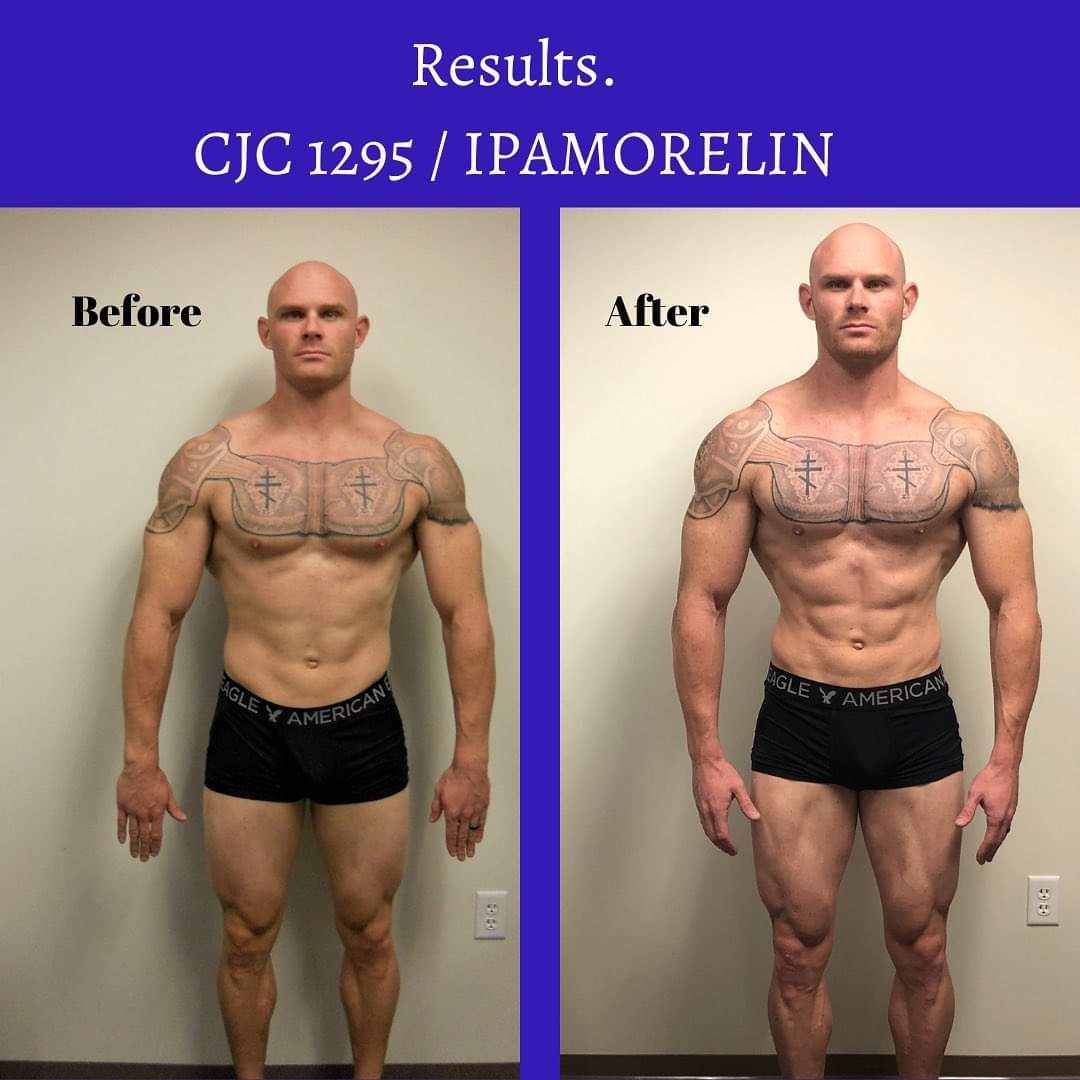 Ipamorelin is a pentapeptide and a ghrelin mimetic with growth hormone (GH) releasing activity. Ipamorelin mimics ghrelin and binds to the ghrelin receptor (or GH secretagogue receptor, GHSR) in the brain, thereby selectively stimulating the release of GH from the pituitary gland.

This results in increased plasma GH levels, which would affect many biological processes. Besides its presence in the brain, GHSR can also be found in the gastrointestinal tract, heart, lung, liver, kidney, pancreas, adipose tissue and immune cells. Unlike other GH releasing peptides, ipamorelin only stimulates GH release in a manner very similar to that of growth hormone releasing hormone.

These two peptides combine to act together in order to increase HGH (human growth hormone) produced in the body. The CJC 1295/Ipamorelin combo is able to achieve this by acting in two different families of receptors.

How does CJC 1295 Ipamorelin work?

Ipamorelin and CJC 1295 are often used together to stimulate muscle development. The combination works by increasing the blood level of hormones associated with growth. It can increase muscle mass and strength, decrease body fat, improve injury recovery time, and even improve sleep quality and cognitive function.

Research completed with healthy men and women between the ages of 21 and 61, showed that CJC-1295 had the ability to increase serum growth hormone levels by 200-1000%. In these individuals, the elevated growth hormone production and release continued for up to 6 days because CJC-1295 has a half life of about 6-8 days. This longer half-life means the body continues to produce beyond the day of injection and is thought to be a great benefit as compared to other peptides that also have similar actions. For this reason and a few more, CJC-1295 has become a very effective peptide for safely increasing growth hormone levels.

The effects of CJC-1295 have been researched thoroughly. It is beneficial in building muscle, losing body fat, and boosting energy levels. It does all these by facilitating the production of more growth hormone for your body.

How Long Does It Take To See Results With CJC 1295 Ipamorelin?

Generally, CJC-1295 takes anywhere from 1-4 hours to reach peak serum in the blood, while Ipamorelin works much quicker. Ipamorelin is cleared from the body more rapidly as it’s half life is about 2 hours. The combination of both peptides ensures a rapid onset with Ipamorelin and lasting effects with CJC-1295.

How should CJC-1295/Ipamorelin be used?

CJC-1295/Ipamorelin is injected subcutaneously or under the skin. The injection is taken at night to mimic the natural release cycle of growth hormone.

Benefits of CJC1295 ipamorelin include:

Increased Bone Density: As we get older, our bones get brittle, that is why injuries are more common.

The ability to burn fat: An increase in muscle mass boosts the body’s resting metabolic rate leading to more calories being burned throughout the day.

Increased Sex drive: Sex is huge. Not being able to function properly sexually can really take a toll on your mental well-being.

Improved Recovery and Repair from Injuries: Being on a proper bio-identical hormone replacement therapy program leads to an overall improved state of well-being. This adheres to recovery time (soreness) and acute musculoskeletal injuries.

Strengthens Immune System: It is a tremendous benefit when you are trying to attain optimal health and that is achieved by having a strong immune system.

Improves cognition and memory function: It has an improved overall benefit to the body, this includes focus and feeling mental clarity and sharpness throughout the day.

What are the side effects of CJC1295 / Ipamorelin?

Most people tolerate CJC-1295 Ipamorelin quite well, and side effects are generally mild if present at all. The most frequent side effect was injection site reaction – usually skin complaints or mild pain at the site of injection.

Most common side effects are:

CJC-1295 is a releasing factor for growth hormone and is therefore considered a Prohibited Substance under Section S2 of the WADA Prohibited List. This substance has potential performance-enhancing effects, it is readily available, and there is reason to believe that it is being used within the bodybuilding community.

Ipamorelin: Dosage, Benefits, Side Effects, Before & After