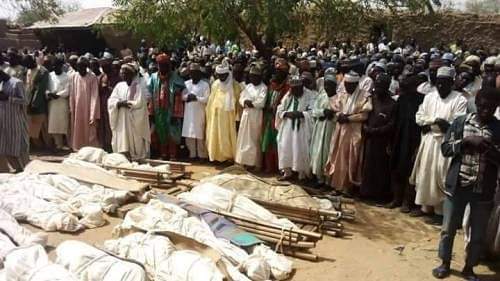 According to news report reaching public health Nigeria , a yet-to-be-identified disease has claimed at least 18 lives at Matazu, in Matazu Local Government Area of Katsina State, The Sun reports. However, according to ThisDay newspaper, the strange disease has reportedly killed no fewer than 50 people in the Local Government Area of Katsina State in the last 21 days. The disease, which is yet to be known, broke out in Kogware and Ungwan Sarka communities when five victims suddenly lost consciousness before they were rushed to the council’s General Hospital.

According to residents, on arrival at the hospital, one of the victims who was among the first to be rushed to the hospital, gave up the ghost. The residents also told ThisDay which visited the affected communities on Tuesday, that the remaining 49 persons died in their various houses while receiving traditional medicine from herbalists. The village head of Kogware community, Shu’aibu Iliyasu, who also confirmed the development, said 50 persons had so far died as a result of the strange disease within the community. But the state government said 45 cases of the strange illness were recorded with 18 dead. Iliyasu said: “We are still shocked over this unforseen circumstances that led to the death of our people. In this community alone, 50 people including children have died of this strange disease. “There are reported cases of death also in Ungwan Sarka but I don’t know the exact figure because the place is not under my jurisdiction,” the traditional ruler said. The paramount ruler added that he reported the scenario to the local government council and injections and drips were given to the victims by the medical personnel in the area but the situation persisted, hence the need for speedy action by the state government.

According to him, “We therefore, call on the state government as a matter of urgency to come to our aid by providing the needed medical attention and investigate the root cause of this strange disease and take precautionary measures to end the untimely death of my people.” Another resident, Kabir Garba Sarka, said many people died of the same illness at Ungwan Sarka and over 800 people were hospitalized in different hospitals in the area.

However, when contacted, the Executive Secretary of Katsina State Primary Healthcare Development Agency, Dr. Shamsudeen Yahaya, said only 18 people died of the strange illness as investigation was ongoing to unravel the disease. “We have 45 cases of that suspected illness. Out of it, we have 18 dead. And out of the 11 samples we collected, five are negative, while the remaining six we are waiting for the result because we have taken the samples to Lagos. “People could have died of any other thing but for this one, that is the figure. It is a suspected case. We can only believe it when we have laboratory confirmation,” he said. It could be recall that the Katsina State government had of recent immunized over six million people against yellow fever when the deadly disease broke out in Dan-Musa Local Government area of the state.

Coronary Heart Disease Can Kill You Quickly or Slowly

The World’s 10 Fattest People and How They Died