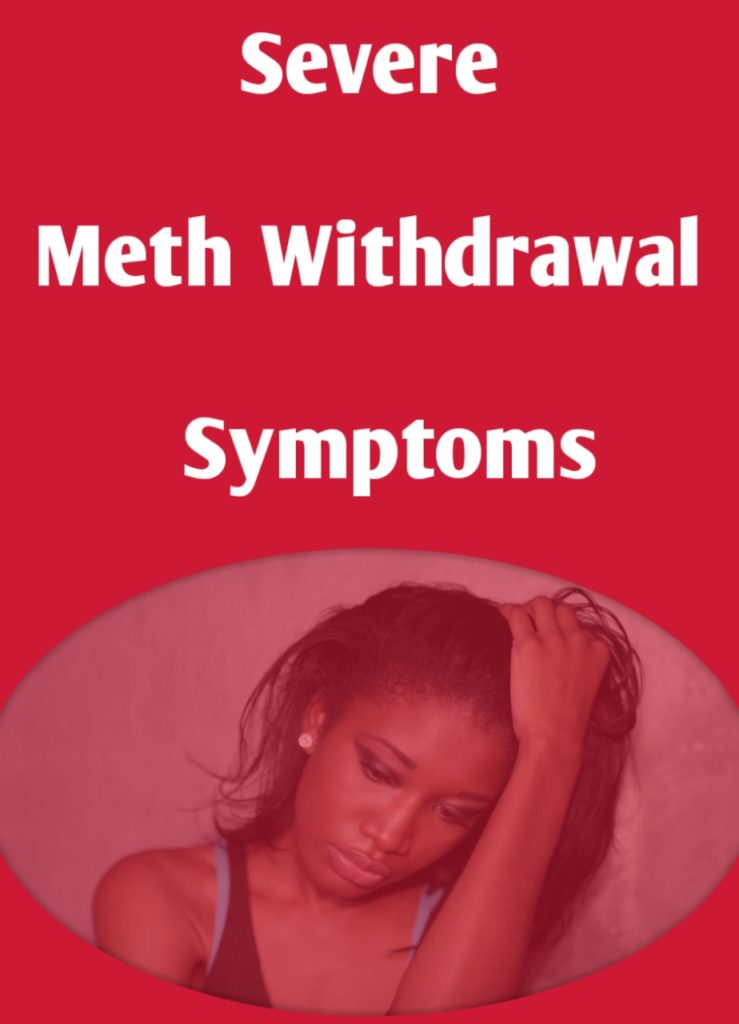 Meth is a short form of Methamphetamine a stimulant drug usually used as a white, bitter-tasting powder or a pill. It is a potent central nervous system stimulant that is mainly used as a recreational drug and less commonly as a second-line treatment for attention deficit hyperactivity disorder (ADHD) sleep disorder and obesity.

Meth is a Schedule II drug in the US, which means that it has a high potential for abuse, and the potential to cause severe physical and psychological dependence. Crystal methamphetamine is a form of the drug that looks like glass fragments or shiny, bluish-white rocks. Other common names for meth include chalk, crank, crystal, ice, and speed. People use meth by inhaling/smoking, swallowing (pill), snorting or injecting the powder that has been dissolved in water/alcohol.

What is Meth Withdrawal Symptoms?

Meth Withdrawal symptoms refer to the unpleasant physical reaction that accompanies the process of ceasing to take the drug. Individuals who abuse meth or crystal methamphetamine habitually can easily develop a physical dependence on the drug. This occurs when the human body adapts to the constant presence of the drug in its system. Once a physical dependence is established, tolerance to the drug typically follows, which means that the individual will need higher and more frequent doses of methamphetamine to feel the same effects a smaller dose once created.

Although the effects of methamphetamine can be felt quickly, the drug leaves the body in a rapid fashion, which can lead to a “crash.” When someone repeatedly takes large doses of meth one after the other in a short period to avoid this crash, it can speed up the development of physical dependence and tolerance.

How does meth affect the brain?

Methamphetamine increases the amount of the natural chemical dopamine in the brain. Dopamine is a chemical found naturally in the human body. It is a neurotransmitter, meaning it sends signals from the body to the brain. Dopamine plays a part in controlling the movements a person makes, as well as their emotional responses. The right balance of dopamine is vital for both physical and mental well-being. The drug’s ability to rapidly release high levels of dopamine in reward areas of the brain strongly reinforces drug-taking behavior, making the user want to repeat the experience.

Severe meth withdrawal symptoms may include (but are not limited to):

Extreme anxiety – Anxiety that is persistent, seemingly uncontrollable, and overwhelming. If it’s an excessive, irrational dread of everyday situations, it can be disabling. When anxiety interferes with daily activities, you may have an anxiety disorder. The term “anxiety disorder” refers to specific psychiatric disorders that involve extreme fear or worry, and includes generalized anxiety disorder (GAD), panic disorder and panic attacks, agoraphobia, social anxiety disorder, selective mutism, separation anxiety, and specific phobias. Obsessive-compulsive disorder (OCD) and posttraumatic stress disorder (PTSD) are closely related to anxiety disorders, which some may experience at the same time as depression. Severe meth withdrawal symptoms such as severe anxiety can be scary, and severe anxiety symptoms can significantly impair quality of life.

Excessive irritation – In addition to many other negative effects of meth abuse, chronic users may suffer from skin sores, which are often due to the user picking at the skin. Many meth users experience the sensation of insects crawling on or under their skin. As a result, they repeatedly pick at their skin, scratching at things that aren’t there. This is called parasitosis, or “meth mites.” Users who inject methamphetamine, as well as cocaine, heroin, or any injectable drug, are at great risk for skin infections. One study published in the British Journal of Dermatology found that 11 percent of IV drug users reported at least one abscess within the previous six months. Irritation from meth withdrawal usually becomes excessive, all-consuming, and interferes with virtually all aspects of daily living.

Dysthymia- Dysthymia is defined as a low mood occurring for at least two years, along with at least two other symptoms of depression. Examples of symptoms include lost interest in normal activities, hopelessness, low self-esteem, low appetite, low energy, sleep changes, and poor concentration. It’s regarded as a clinical disorder when depressed mood and related symptoms are serious enough or last long enough to interfere with work, social life, family life, or physical health. This condition is associated with the risk of developing dementia and mortality accounting for 31.6% risk of death.

Prolonged fatigue- Fatigue is a term used to describe an overall feeling of tiredness or lack of energy. It isn’t the same as simply feeling drowsy or sleepy. When you’re fatigued, you have no motivation and no energy. Being sleepy may be a symptom of fatigue, but it’s not the same thing. Fatigue from meth withdrawal can cause a vast range of physical, mental, and emotional symptoms including chronic headache, dizziness, sore or aching muscles, muscle weakness, slowed reflexes and responses, impaired decision-making and judgment. Excess fatigue is the most prevalent precursor of sudden cardiac death

Polyphagia (Uncontrolled appetite) – Unsupervised withdrawal from meth can lead to Polyphagia a condition characterized by excessive eating. Polyphagia is also a symptom of some psychological conditions and is commonly associated with the eating disorder bulimia. Bulimics may eat huge quantities of food and then force themselves to vomit. Some people suffering from anxiety or depression may also have bouts of polyphagia, though it is not characteristic of either condition. Excessive eating leads to increase weight gain which negatively affects BMI and predisposes you to many life-threatening conditions such as diabetes, heart disease, kidney disease, stroke, and infections.

Insomnia (Sleeplessness) –Insomnia is a common sleep disorder that can make it hard to fall asleep, hard to stay asleep, or cause you to wake up too early and not be able to get back to sleep. You may still feel tired when you wake up. Insomnia can sap not only your energy level and mood but also your health, work performance, and quality of life.  A Penn State Cohort study reported that Insomnia with objective short sleep duration in men is associated with increased mortality, a risk that has been underestimated. The mortality rate was 21% for men and 5% for women

Vivid dreams-Using alcohol in excess, using recreational drugs, or experiencing a withdrawal from drugs like meth can trigger vivid dreams, often nightmares. This can impair the quality of life for the people who are affected by the condition. This can make you avoid sleep, which leads to sleep deprivation which could lead to even more intense nightmares fatigue, and insomnia which can sometimes result in death. ALSO SEE: Meth Comedown: Causes, Symptoms, Tips, Help