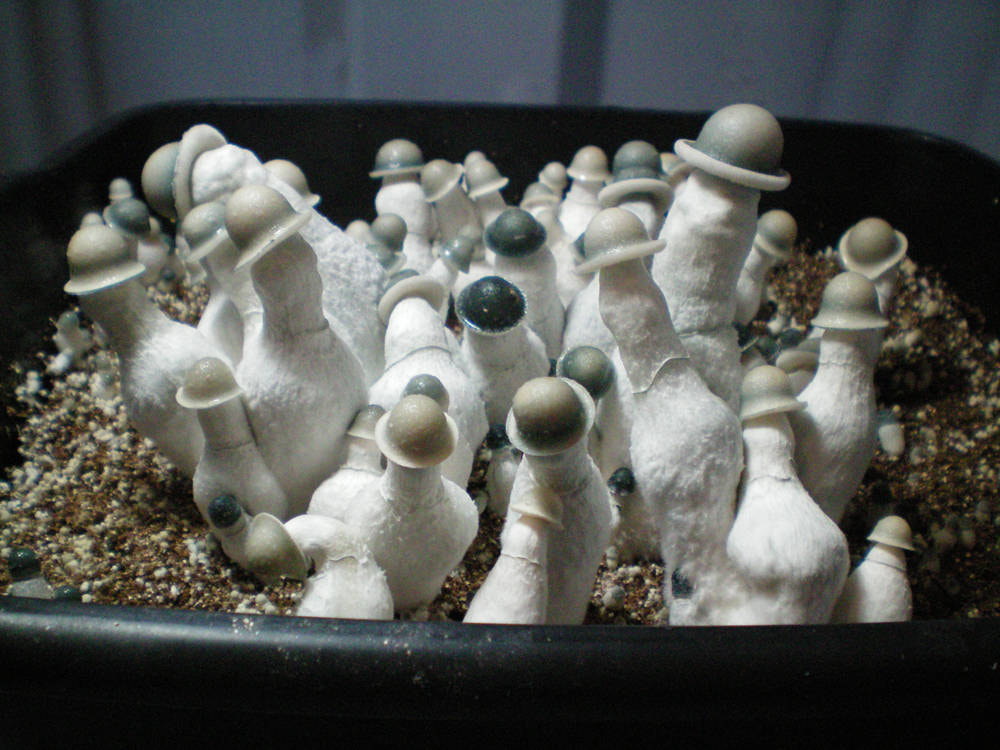 What is Albino Penis Envy (APE)?

Albino Penis Envy (APE) is a psychedelic mushroom, a very unique strain of Psilocybe Cubensis. This mushroom is a hybrid of the infamous Penis Envy, and Albino PF, and is reported to be the strongest and the most potent strain of the PE variants. The principal active compound  in Albino Penis Envy (APE) is psilocybin. Other names for albino penis envy (APE) are; shrooms, magic mushrooms, golden tops, cubes, or gold caps.

Albino penis envy (APE) does not produce as well as other strains of Cubensis. The mushrooms tend to be small in stature, but very dense, and slow to mature. The spores are hard to harvest, as the caps rarely show their gills, and the spores are transparent. APE is known best as a “novelty mushroom.”

What Do Albino Penis Envy Mushrooms Do?

Magic mushrooms like Albino penis envy are hallucinogenic drugs, meaning they can cause you to see, hear, and feel sensations that seem real but are not. The effects of magic mushrooms, however, are highly variable and believed to be influenced by environmental factors. This type of mushrooms have a long history of being associated with spiritual experiences and self-discovery. Many believe that naturally occurring drugs like magic mushrooms, weed, and mescaline are sacred herbs that enable people to attain superior spiritual states. Others take magic mushrooms to experience a sense of euphoria, connection, and a distorted sense of time.

The psilocybin found in Albino penis envy is converted to psilocin in the body and is believed to influence serotonin levels in the brain, leading to altered and unusual perceptions. The effects take 20 to 40 minutes to begin and can last up to 6 hours—the same amount of time it takes for psilocin to be metabolized and excreted.

The mushrooms containing psilocybin are schedule-I controlled substance, meaning that it has a high potential for abuse and serves no legitimate medical purpose. Individuals use psilocybin as a recreational drug. It provides feelings of euphoria and sensory distortion that are common to hallucinogenic drugs, such as LSD. It is illegal to possess, buy, sell or use albino penis envy. Recently, a hotel guest’s stay was interrupted with his arrest after allegedly arranging to have “magic mushrooms” and other drugs mailed to him at a Hotel in Maryland, United States. The man, who was using an alias, was processed and charged with possession of psilocybin and possession of LSD. He was then released pending his first court appearance. However, New Jersey is seeking to make amendment to a Senate bill which calls for downgrading felony possession of an ounce of psilocybin mushrooms to a disorderly persons offense, punishable by up to six months in jail.

How Common is the Use of Albino Penis Envy?

In the U.S., the National Survey on Drug Use and Health (NSDUH) suggested that, between 2009 and 2015, around 8.5 percent of people reported using psilocybin at some point in their life. When people use psilocybin, it is usually at dance clubs or in select groups of people seeking a transcendent spiritual experience. In medical settings, doctors have tested psilocybin for use in treating cluster headaches, end-stage cancer anxiety, depression, and other anxiety disorders. However, scientists have questioned its effectiveness and safety as a therapeutic measure.

What are the Effects of Albino Penis Envy (APE)?

Although medical bodies do not consider psilocybin to be an addictive substance, users can experience disturbing hallucinations, anxiety, and panic from using the drug. Anecdotal evidence suggest that effects include vivid visual stimulation, intense feelings of euphoria, uncontrollable laughter, and joy, along with periods of deep introspective and philosophical thought.

What are the Side Effects of Albino Penis Envy (APE)?

All hallucinogens including Albino penis envy carry the risk of triggering mental and emotional problems and causing accidents while under the influence. Among adolescents, magic mushrooms are frequently taken in combination with alcohol and other drugs, increasing the psychological and physical risks. The amount of psilocybin and psilocin contained in any given magic mushroom is unknown, and mushrooms vary greatly in the amounts of psychoactive contents. This means it’s very hard to tell the length, intensity, and type of “trip” someone will experience.

Consuming Albino penis envy can result in a mild trip causing the user to feel relaxed or drowsy to a frightening experience, marked by hallucinations, delusions, and panic. In the worst-case scenario, magic mushrooms have even been known to cause convulsions.

Side effects of magic mushrooms can include both physical and mental effects.

More research is needed on the long-term, lasting side effects of Albino penis envy but it has been reported that users can experience long-term changes in personality, as well as flashbacks long after taking mushrooms. Since magic mushrooms look similar to poisonous mushrooms, poisoning is yet another potential risk of taking these drugs. Mushroom poisoning can cause severe illness, organ damage, and even death.

It’s also common for magic mushroom products to be contaminated. A study of 886 samples alleged to be psilocybin mushrooms analyzed by Pharm Chem Street Drug Laboratory showed that only 252 (28%) were actually hallucinogenic, while 275 (31%) were regular store-bought mushrooms laced with LSD or phencyclidine (PCP), and 328 (37%) contained no drug at all.

Psilocybin, the principal active agent in Albino penis envy is not chemically addictive, and no physical symptoms occur after stopping use. However, regular use can cause an individual to become tolerant to the effects of psilocybin. Cross-tolerance also occurs with other drugs, including LSD and mescaline. People who use these drugs must wait at least several days between doses to experience the full effect. After several days of psilocybin use, individuals might possibly experience psychological withdrawal and have difficulty adjusting to reality. SEE: How Enoki Mushrooms Listeria Killed 4 Persons