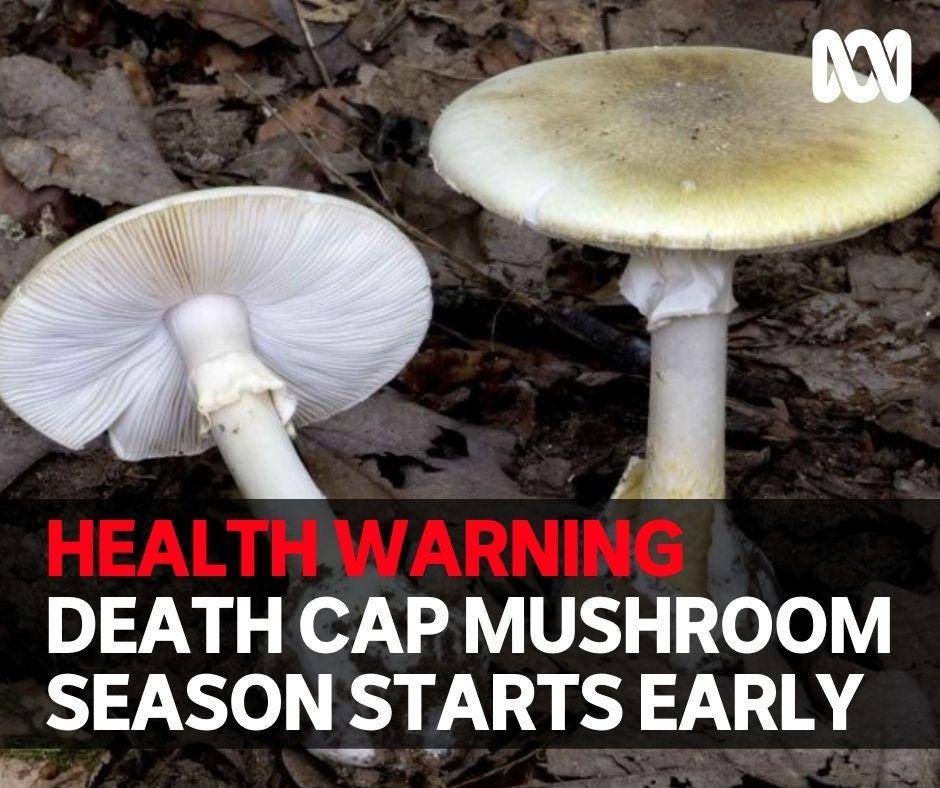 Death cap mushroom scientifically known as Amanita phalloides is a deadly poisonous basidiomycete fungus, one of many in the genus Amanita. Widely distributed across Europe, but now sprouting in other parts of the world. In some cases, the death cap has been introduced to new regions with the cultivation of non-native species of oak, chestnut, and pine. The large fruiting bodies (mushrooms) appear in summer and autumn; the caps are generally greenish in color with a white stipe and gills. Cap color is variable, including white forms (see Taxonomy below), and thus not a reliable identifier.

These toxic mushrooms resemble several edible species (most notably Caesar’s mushroom and the straw mushroom) commonly consumed by humans, increasing the risk of accidental poisoning. Amatoxins, the class of toxins found in these mushrooms, are thermostable: they resist changes due to heat, so their toxic effects are not reduced by cooking.

Amanita phalloides is one of the most poisonous of all known mushrooms. It is estimated that as little as half a mushroom contains enough toxin to kill an adult human. It has been involved in the majority of human deaths from mushroom poisoning, possibly including the deaths of Roman Emperor Claudius in AD 54 and Holy Roman Emperor Charles VI in 1740. It has been the subject of much research and many of its biologically active agents have been isolated.

Death by death cap typically begins with severe vomiting, abdominal cramps, and diarrhea that comes on about 6-24 hours after ingestion. Other symptoms may occur, including but not limited to headache, dizziness, and coughing. Typically, the symptoms clear up and the poisoned person feels better for a day or so. But the poisonous amatoxins inside the mushroom are at work and 3-5 days after ingestion the person can experience liver, kidney, and other organ failure, and death. There is no antidote for poisonous mushrooms. Amatoxin is not killed by cooking/heat. The lethal dose can be tiny, and a single mushroom can contain enough poison to kill multiple adults.

The death cap mushroom may look like other, non-poisonous mushrooms that the forager is familiar with either locally or internationally.

What makes the death cap mushroom so deadly?

Death cap mushroom has been the subject of much research and many of its biologically active agents have been isolated. The principal toxic constituent is α-amanitin, which damages the liver and kidneys, causing liver and kidney failure that can be fatal. SEE: DMT Trip: Health Risks, Side Effects, Advice

Can you survive eating a death cap?

Ingesting Death cap mushrooms is one of the deadliest things a human can do. Amanita phalloides and its amatoxins can lead to liver and kidney failure. The symptoms usually appear within 20 minutes to 4 hours of ingesting the mushrooms and include nausea, vomiting, cramps, and diarrhea, which normally pass after the irritant had been expelled. Severe cases may require hospitalization. Supportive treatment may include attempts to eliminate the irritants. In all cases where there has been vomiting and diarrhea, measures to replace lost fluids and electrolytes are important. Recovery is complete, though a bout with severe gastro-intestinal distress may put one off ever eating mushrooms again. The end result, if not treated immediately, can be death.

What happens if you touch a death cap mushroom?

You won’t die if you touch a death cap mushroom even after handling some samples without gloves. Just be mindful to wash your hands afterward. “The toxin is a very stable one, so cooking or boiling them for a long period of time won’t make them safe. The harmful toxins in mushrooms must be consumed in order to harm you.

How to forage for mushrooms safely

Only eat foraged mushrooms if you are 100% certain of the species. Amanita phalloides is not the only poisonous mushroom growing in our region and there are other mushrooms that can cause severe illness and death. The safest thing you can do is to have your mushrooms examined by a mushroom expert or “mycologist.”

The Puget Sound Mycology Society recommends that mushroom foragers take the following steps when foraging for any wild mushroom:

Do not assume the mushroom is safe just because you saw another animal eating the mushroom. The Washington Poison Center reports that rabbits, for example, can safely eat the death cap mushroom while in humans the death cap causes liver poisoning. READ Everything You Should Know About Magic Mushrooms