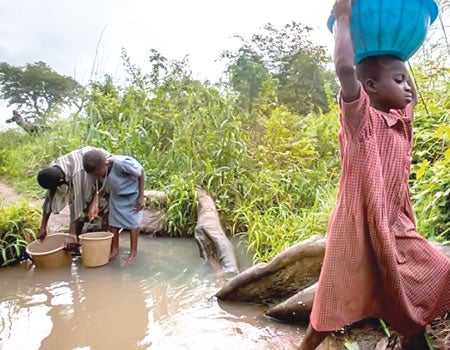 Nigeria is considered to be abundantly blessed with water resources. However, there is temporal and spatial variation in water availability, the North with low precipitation of only about 500mm in the northeastern corner, and the south with precipitation of over 4,000mm in the southeast. This high variability of rainfall in time and space is a significant characteristic of the tropical climatic belt, especially the Sahelian part of the country, in which the country is located and this needs to be factored into water resources management in the country. The Nigerian Sahelian belt is at the southern border of the Sahara desert and it is here that the country faces the challenges of high variability in precipitation which has been manifested in the form of persistent drought in the past three decades with its attendant impact on reduction in the extent of wetlands in the HadejiaNguru area and the almost complete loss of the Lake Chad. The country is drained mainly by the River Niger and its main tributary, the River Benue and its numerous minor tributaries as well as by the Lake Chad basin and the rivers that discharge into it. There are several other perennial rivers, e.g. Gongola, Hadejia-Jama’are, Kaduna, Cross River, Sokoto, Ogun, Osun, and Imo. The total surface runoff is large. Annual runoff at the Lokoja gauging station on River Niger has been recorded as up to 165.80 billion cubic meters. The volume of available groundwater is also considerable in large sedimentary basins (the Sokoto and the Chad basins) which lie along the country’s international boundaries.

Poor access to improved water and sanitation in Nigeria remains a major contributing factor to high morbidity and mortality rates among children under five. The use of contaminated drinking water and poor sanitary conditions result in increased vulnerability to water-borne diseases, including diarrhoea which leads to the deaths of more than 70,000 children under five annually.

Wealth also distorts access. About 80% of wealthy Nigerians have access to at least a basic water supply, in comparison to only 48% of poor Nigerians. Seventy-three percent of the diarrhoeal and enteric disease burden is associated with poor access to adequate water, sanitation, and hygiene (WASH), and is disproportionately borne by poorer children. Frequent episodes of WASH-related ill-health in children, contribute to absenteeism in school, and malnutrition. Only 26.5 percent of the population use improved drinking water sources and sanitation facilities. Also, 23.5 percent of the population defecates in the open.

The primary responsibility for the provision of municipal and domestic water supply is that of the state and local governments. However, the federal government often intervenes to increase access in order to meet these targets.

Pollution is another major cause of water scarcity in Nigeria. It’s common to see waste dumped in rivers and streams. Poor water quality affects people, the economy, and the environment. Contaminated water is the primary cause of diseases such as typhoid fever, diarrhea, and dysentery in Nigeria. Water pollution in Nigeria occurs in both rural and urban areas. In rural areas, drinking water from natural sources such as rivers and streams is usually polluted by organic substances from upstream users who use water for agricultural activities. The most common form of stream pollution associated with forestry activities is increased concentrations of soil particles washed into the stream by land disturbance. The large particles sink to the bottom and increase the bed load while, depending on the stream velocity, smaller particles remain in suspension. In the river Niger, for example, studies have shown that the suspended matter can obstruct the penetration of light and limit the photosynthetic zone to less than 1 m depth. Suspended sediments in watercourses have become a serious concern for the water supply authorities because they lead to increased water treatment costs.

Another cause of water scarcity in Nigeria is Ageing and Decayed Water Infrastructure. A  survey of most public water utilities in Nigeria shows increasingly poor working conditions due to frequent breakdowns; ageing and poor asset management of these urban water infrastructures. Several attempts made in the past to rehabilitate these UWIs have not positively changed their level of deterioration. Presently, their overall assessment grade is best described as fairly poor as most of these assets have only 10 -35% of their expected useful life remaining, low capacity utilization, and assets require a significant level of maintenance. Consequently, their service delivery and coverage have been so poor across the country resulting in various environmental and socio-economical problems which have been of great concern.

Another major problem is that the country has adopted a “control and command” approach to water resource management. It focuses on engineering physical infrastructure and excludes other perspectives. This means that authorities managing water don’t sufficiently engage with the people using it. Infrastructure in communities tends to collapse when users aren’t involved in planning or running it. There has also been little coordination between federal, state, and local government agencies.

New research shows that water management needs different approaches. These include broader stakeholder involvement, collaboration between sectors, more attention to the human dimensions of management, and recognition of the economic, social, ecological, and cultural values of water.

Nigeria has the largest population in Africa. The United Nations project that the overall population of Nigeria will reach about 401.31 million by the end of the year 2050. By 2100, if current figures continue, the population of Nigeria will be over 728 million. This population boom has stretched water resources and infrastructure to their limits. The country had made a considerable investment in water schemes and related activities in addition to being blessed with abundant water resources the desire to improve access to this resource was becoming more and more elusive because of the rapidly increasing demand for water. This rise in demand that was outstripping supply is the consequence of a high population growth rate coupled with increasing urbanization, and rising living conditions as a result of economic growth.

Other challenges facing Nigeria with respect to managing its water resources are shortages of water in urban and rural areas, competing water uses, lower levels of irrigation potential, degrading watersheds and water courses, fragmented and uncoordinated water resources development, poor data and lack of cooperation on co-riparian use of international waters, all in a situation of rapid population growth and diminishing funds.

10 Importance of Water In Nigeria

Impact of Water, Sanitation and Hygiene

What is Water Pollution
Causes Of Water Shortage in Nigeria
August 25, 2022 Sanitation & HygienePublic HealthLeave a comment