What is radon poisoning?

Radon poisoning refers to the exposure to a radioactive gas known as radon beyond permissible limits set by the World Health Organization. Radon poisoning occurs when large amounts enter the body and cause harmful physical changes.

Radon is a naturally occurring element that takes a gaseous form at standard temperatures and pressures and is one of the densest substances to remain a gas under normal circumstances. As a colorless, odorless, tasteless gas, radon is undetectable by human senses. Radon poisoning does not cause the same harmful, obvious symptoms as other radioactive substances. Instead, radon exposure can lead to the development of lung cancer.

Radon occurs throughout most environments in very small quantities. However, it can amass in buildings. Radon accounts for the majority of most people’s exposure to ionizing radiation. In the early 20th century, quack doctors touted radon as being beneficial to health. People could pay small sums of money to spend time in a “radiotorium” and receive bombardments of radon. Other companies attempted to add radon to water, but the short half-life of radon meant that it had disappeared by the time the water reached people. Researchers only discovered its negative health implications at a later date.

In the 1940s and 1950s, companies who set up mines did not widely implement ventilation systems. Doctors attributed lung cancer in miners in the Czech Republic, South Australia, and Southwestern U.S. to radon inhalation. Despite the eventual realization of the hazards, radon-induced lung cancer in miners remained a significant hazard until the 1970s.

Healthcare professionals now acknowledge that inhaling large quantities of radon causes lung cancer. According to the EPA, radon is the second most common cause of lung cancer, after smoking. Radon causes 21,000 lung cancer deaths per year in the U.S. About 2,900 of those deaths occur in people who have never smoked.

Have I been exposed to radon?

The answer is most likely yes. Small amounts of radon are very common and it is highly unlikely you haven’t been exposed at some point. The real question is how much radon have you been exposed to? While a trace amount of radon isn’t a huge problem, high levels of radon and frequent exposure can dramatically increase your risk of lung cancer. You can learn more about the different levels of radon here.

When do radon poisoning symptoms appear?

One reason that radon poisoning is so dangerous is that the symptoms can take a while to appear. Radon poisoning builds up very slowly in your body, so when the symptoms finally appear you can’t afford to ignore them. All too often, radon poisoning symptoms don’t actually appear until you already have cancer or are quite close. This is why it is best to test for radon early, even if you haven’t noticed symptoms yet. 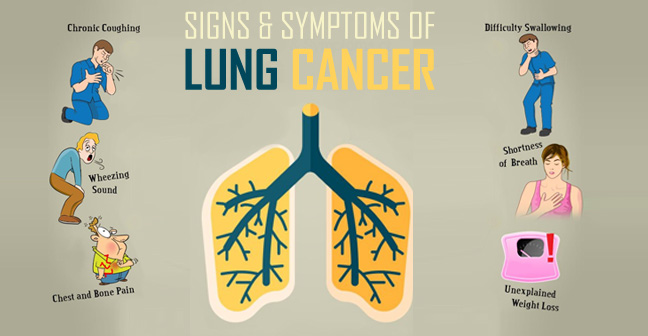 Signs and symptoms of lung cancer from radon exposure can include:

According to the American Cancer Society, smoking cigarettes are the leading cause of lung cancer in the United States and radon is the second leading cause. It is estimated that about 20,000 lung cancer deaths per year are caused by radon exposure. SEE: Stage 4 Lung Cancer Life Expectancy Without Treatment

How to Reduce Radon in Homes

How Long Does a Radon Test Take?