How to Reduce Radon in Homes 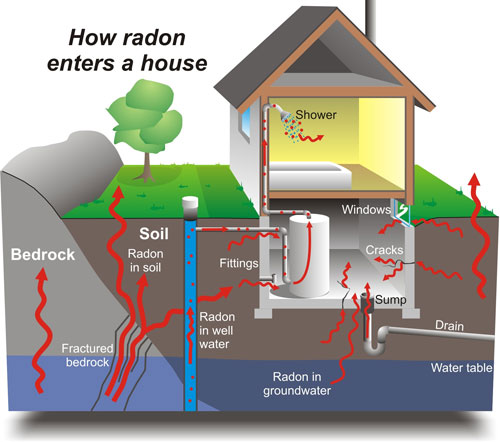 Radon is a naturally occurring radioactive gas. It has no smell, colour or taste. Radon is produced from the natural radioactive decay of uranium, which is found in all rocks and soil. Radon can also be found in water. Radon escapes easily from the ground into the air, where it decays and produces further radioactive particles. As we breathe, the particles are deposited on the cells lining the airways, where they can damage DNA and potentially cause lung cancer.

Outdoors, radon quickly dilutes to very low concentrations and is generally not a problem. The average outdoor radon level varies between 5–15 Bq/m3. However, indoors, radon concentrations are higher, with highest levels found in places like mines, caves and water treatment facilities. In buildings such as homes, schools, and offices, radon levels in the range of 10 Bq/m3 to more than 10 000 Bq/m3 have been found.

What are the health effects of radon?

Radon is the most important cause of lung cancer after smoking. It is estimated that radon causes between 3–14% of all lung cancers in a country, depending on the average radon level and the smoking prevalence in a country.. If you smoke and live in a home with high radon levels, you increase your risk of developing lung cancer. Having your home tested is the only effective way to determine whether you and your family are at risk of high radon exposure.

Radon is much more likely to cause lung cancer in people who smoke. In fact, smokers are estimated to be 25 times more at risk from radon than non-smokers. To date, no other cancer risks have been established.

For most people, the greatest exposure to radon occurs in the home. The concentration of radon in a home depends on:

Radon enters homes through cracks in the floors or at floor-wall junctions, gaps around pipes or cables, small pores in hollow-block walls, or sumps or drains. Radon levels are usually higher in basements, cellars or living spaces in contact with soil.

Radon concentrations vary between adjacent homes, and can vary within a home from day today and from hour to hour. Residential radon levels can be measured in an inexpensive and simple manner. Because of these fluctuations, it is preferable to estimate the annual mean concentration of radon in indoor air by measurements for at least 3 months. However, measurements need to be based on national protocols to ensure consistency as well as reliability for decision-making.

Well-tested, durable and cost-efficient methods exist for preventing radon in new houses and reducing radon in existing dwellings. Radon prevention should be considered when new houses are built, particularly in radon prone areas. In many countries of Europe and in the United States of America, the inclusion of protective measures in new buildings has become a routine measure. In some countries it has become a mandatory procedure.

Radon levels in existing homes can be reduced by:

Passive systems of mitigation have been shown to be capable of reducing indoor radon levels by more than 50%. When radon ventilation fans are added radon levels can even be reduced further.

In many countries, drinking water is obtained from groundwater sources such as springs, wells and boreholes. These sources of water normally have higher concentrations of radon than surface water from reservoirs, rivers or lakes. To date, epidemiological studies have not found an association between consumption of drinking-water containing radon and an increased risk of stomach cancer. Radon dissolved in drinking-water can be released into indoor air. Normally, a higher radon dose is received from inhaling radon compared with ingestion.