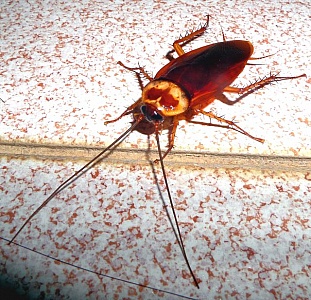 Cockroach is a major insect found in nearly every area inhabited by man. The association between humans and cockroaches is quite remarkable. These rapidly adapting insects have followed humans as pets from the time when our ancestors lived in caves to now when we have moved to skyscrapers. Not only do they bring you social embarrassment and fear but also silently contribute to the deteriorating health of your family.

Cockroaches are among the most common pests in many homes and other buildings. At night they search for food in kitchens, food storage places, rubbish bins, drains and sewers. They are pests because of their filthy habits and bad smell. Some people may become allergic to cockroaches after frequent exposure. Cockroaches by themselves do not cause any disease but they are vectors or carriers for millions of bacteria and infectious agents that can lead to an array of diseases.

Food safety involves routines in the preparation, handling and storage of food meant to prevent foodborne illness and injury. From farm to factory to fork, food products may encounter any number of health hazards during their journey through the supply chain. While inspection primarily focuses on ensuring compliance of food business operators with regulatory requirements.

Because cockroaches move freely from filth to food, they can transfer pathogenic microbes that cause food poisoning and other illnesses this explains why health inspectors make a big deal if they find cockroaches in restaurants and food processing facilities. Cockroach-produced allergens may cause congestion, sneezing and watery eyes, as well as life-threatening bronchial inflammation (asthma) characterized by recurrent cough, wheezing, and difficulty breathing. Asthma triggered by cockroaches is especially common among children living in densely populated housing conditions where infestations are often severe.

Signs Of Cockroach Infestation of Food

There are a few accurate signs that you may have a cockroach problem in your food facility they include:

Egg Casing: also known as oothecae, roaches will stash egg casings where they feel will be safe. You may notice these behind shelving units and appliances, close to furniture and other hidden places. The egg casings are typically oval-shaped and reddish-brown or dark brown in colour. You may also notice cockroach exoskeleton or skin. This looks like a roach shell without the insect inside.

Seeing Cockroaches: the first and most recognizable sign is of course actually seeing one. If you see one, it’s pretty safe to assume that there are more. Always assume there are more to be found even if you only see one and don’t see any others for months. Cockroaches are nocturnal and like to hide in small, tight places so you might not always see the rest.

Cockroach Droppings: cockroaches also leave droppings and pieces of their shells wherever they travel. The droppings are made of faecal matter and regurgitated food and look like ground-up pepper flakes. Obviously given the composition of these droppings, they are highly unsanitary and can spoil an entire container of food if they were to come in contact with any amount of food.

Unpleasant Smell: another fairly obvious sign if there is a large infestation is a smell. Cockroaches secrete an oily, pungent pheromone that is extremely unpleasant. Not only is the smell bad enough, it can even get into your food and affect the flavour. A customer complaint about poor tasting food can be a potential sign of contamination from a roach problem.

Moulting Cockroach Skins (exuviae): cockroaches shed their outer protective layer from 5 to 8 times as they grow. This “skin” usually can be found close to areas where cockroaches shelter.

Smear Markings: due to their nocturnal nature, smear marks and droppings are much easier to spot than the insects themselves. Smear markings are indicative that water is abundant in your home. The markings themselves will be long with an irregular shape. They will be found in the same areas of roach droppings. While smear marks show evidence of water, droppings show a lack of water being ingested.

Food contamination: Cockroaches can virtually live by eating anything. Apart from the food we eat, they also feed on dead plants, animals, faecal matter, glue, soap, paper, leather and even strands of fallen hair. While crawling around at night, cockroaches are drawn to human food, they both defecate and regurgitate on the food that they eat. While this is disgusting on its own, it also spreads bacteria and parasites that may be living inside of them leaving behind hair and dead skin and depositing empty eggshells in it.

Inoculation of disease-causing bacteria: While feeding cockroaches regurgitate their own saliva and digestive fluids from their mouth to inoculate your food with germs or bacteria residing in their gut. A study found that the bacterium Pseudomonas aeruginosa can multiply extensively in the gut of cockroaches. It can cause several diseases like urinary tract infections, digestive problems and sepsis.

Asthma: Cockroaches can be the worst enemies of asthmatic people. The incidence of an asthma attack may increase if your house is infested with cockroaches. Cockroach allergens can cause severe complications and can even be life-threatening. And people who are not asthmatic may develop cockroach asthma by inhaling cockroach allergens. See: How to Kill Cockroach With Boric Acid

Once you have found signs of cockroach activity in your food facility, you may want to extend the search to where the pests are actually hiding. Roaches like dark, undisturbed, moist areas that are close to food which leaves many potential hiding places.