What is The Traditional Kuli Kuli  Recipe? 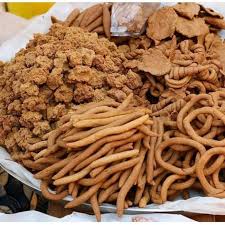 Kuli-kuli refers to a West African snack that is primarily made from peanuts. First made by the Nupe People of West Africa it is a popular snack in Nigeria, Benin, northern Cameroon, and Ghana. It is often eaten alone or with a mixture of garri also known as cassava flakes, sugar, and water popularly called “garri soakings”.

It is also eaten with Hausa koko, fura, kamu; and is sometimes ground and put into a salad. It is often ground as used as an ingredient for Suya and Kilishi. There are several health benefits of eating kuli kuli, it contains proteins because of the peanuts from which it is made. It is also a good source of important vitamins and minerals such as Magnesium, Phosphorus, and Vitamin E.

How is Kuli Kuli Made?

To make kuli-kuli, peanuts are roasted and then ground into a paste called “Labu”. The paste is then mixed with spices such as ginger, salt, and sometimes ground pepper, and occasionally sugar. The paste is stripped of excess oil with water, and made into the desired shape (round balls, cylinders, etc.). Adding potash to the oil increases the boiling point of the oil. This results in oil being extracted from the kuli-kuli so that you have more liquid oil than when you began. Thus heated and fried, the shaped peanut paste begins to solidify and harden. It is then removed from the oil and allowed to cool down until ready to be eaten. It has a very long shelf life and is often given to children as a treat or sold in taxi parks by teenage girls to hungry travelers.

All aspects of producing and selling the peanut oil and kuli-kuli is ‘woman’s work’. Quite often, women grow the crop, extract and refine the oil, produce the kuli-kuli, carry it to the market, and sell it. In many cultural groups, this is ‘her money’ to spend as she deems fit. A man growing peanuts is more likely to sell his entire crop of 100 kilo bags wholesale. The wholesaler will be responsible for transportation.

Side Effects of Kuli Kuli

One of the disadvantages of kuli kuli , despite their contribution to your overall health, is their high-calorie content. Calories can make a difference if you’re trying to manage your weight. A 1-ounce serving of roasted peanuts, which is equal to about a handful or 39 peanuts, contains 170 calories.

When snacking on a kuli kuli, it’s easy to rapidly exceed your calorie allotment if you eat more than one ounce. Kuli Kuli is a good source of phosphorus, with 113 milligrams per ounce. However, phosphorus is in a storage form called phytic acid or phytate. Phytates are often referred to as anti-nutrients because they chelate other minerals, preventing your body’s ability to utilize them.

When you eat peanuts, the phytates bind with other nutrients and reduce their absorption. The most vulnerable minerals are iron, zinc, calcium, and manganese. In addition, phytates reduce the digestibility of protein, and over time this can lead to mineral deficiencies, allergies, and irritation of the intestinal tract, according to Humane Living. Phytates can contribute to mineral deficiencies, especially in young children or people with poor diets.

You can reduce your risk by eating a balanced diet that includes all the food groups. But if you have a mineral deficiency, such as zinc or iron, limiting the intake of high phytic-acid-containing foods is advised by the GI Society.

In addition, Kuli kuli is made from groundnut which is one of the most common allergens and can cause severe, potentially life-threatening responses. A reaction to groundnuts can be unpredictable, even with very small amounts. This results from your body’s immune system, which identifies the peanut protein as harmful and triggers symptoms. SEE: Health Benefits and Side Effects Of Groundnut Water