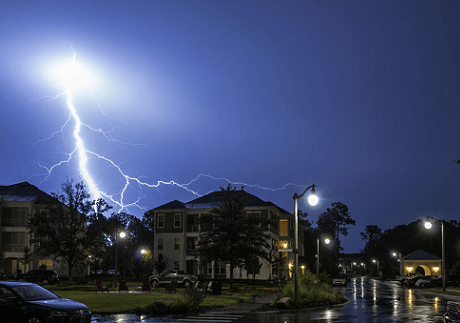 Lightning is described as one of nature’s most powerful forces. Lightning can have devastating effects on people, property and trees. Each strike of lightning can reach more than five miles in length, and produce temperatures greater than 50,000 degrees Fahrenheit and an electrical charge of 100 million volts. At any given moment, there are 1,800 thunderstorms in progress somewhere across the earth. Lightning detection systems in the United States sense an average of 25 million lightning strikes per year.

About 240,000 incidents regarding lightning strikes happen globally each year. According to National Geographic, annually about 2,000 people are killed worldwide by lightning. It is one of the most common causes of weather-related deaths in the U.S. Lightning is a frequent occurrence worldwide with an estimated 50 occurrences per second and 20% of those resulting in ground strikes. SEE: What Attracts Lightning To A House

A lightning strike on a house discharges atmospheric electricity which is generated by an accumulation of differing charges within a cloud on the bulding. Each year lightning strikes cause billions of dollars in property damage and complete devastation. The following are the things that can happen when lightning strikes your house;

Halfway House
June 23, 2021 Family & Community HealthPublic HealthComments Off on What Happens If Lightening Strikes Your House?