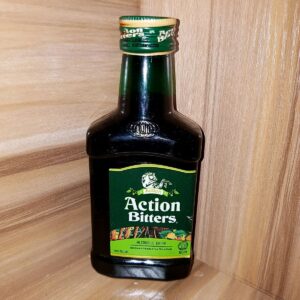 Action Bitters is a wine colored full-bodied spirit with a slight bitter-sweet and appetizing aroma. The brand is for the class of consumers who desire if for its quality restorative and aphrodisiac values. Basically targeted at the young, trendy and inspirational men and women whom want to be on top of their game while maintaining an Active lifestyle.

The stimulation of bitter receptors in the body promotes healthy digestion by increasing digestive secretions. This leads to better absorption of nutrients, natural detoxification of the liver, and thanks to the gut-brain connection,  bitters can even have a positive effect on stress. According to a study published in the Journal of Medical Sciences, bitters generally have been reported to prevent kidney and bladder infections, help to regulate blood pressure and dilate arteries, facilitate digestion, prevent disorder like ulcers, gastritis, insomnia, stress and depression and prevent overweight and excess body fat. SEE: Alomo Bitters: Alcohol Percentage, Weight Loss, Diabetes & Effects

However, in an interview with Vanguard, Mr Stephen Laiko, Bauchi State Coordinator, NAFDAC, said most bitter herbal drinks were dangerous to human health. He said that such drinks were not supplements or drugs that should be consumed as the bitter tastes could cause havoc to consumers. Laiko advised people to abstain from excessive consumption of bitter drinks to avoid medical disorder. He said NAFDAC had tested some of the bitter drinks and provided them with registration numbers, having been found to be less harmful “Bitter drinks are not drugs or supplements; if you must drink, it is advisable to consume those with NAFDAC numbers because they had been tested and found not to contain intoxicants”, he said.

In Asaba, medical practitioners say bitters help the body to build strong immunity against diseases. Dr Alfred Ebiakofa, staff of Delta Ministry of Health, said bitters are in line with the alkaline system of the body, fight against diseases and help to reduce the sugar level in the body. “ For this reason, some people squeeze bitter leaf and drink the liquid as medication for a particular ailment”, he said. Dr Emeke Obi of St. Lukes Hospital, Asaba, said bitter drinks are medicinal because of the numerous works they perform in the body. He said bitters help to flush the body system and makes it normal while some like “agbo” or roots, could be used for the treatment of malaria. He said most people still make it a habit to take a glass of “agbo” every morning to clean and flush the body system. READ: Does Alomo Bitters Remove Pregnancy?