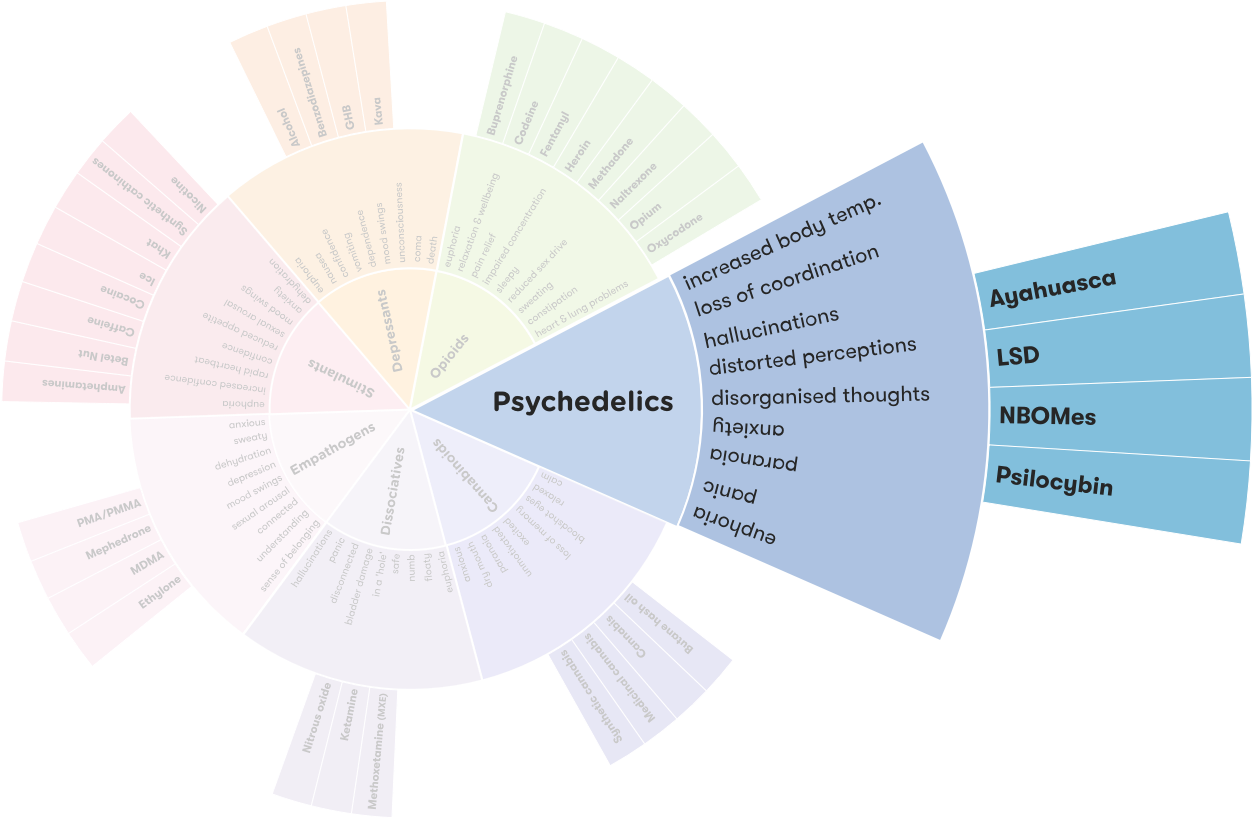 Psychedelics (also known as hallucinogens) are a class of psychoactive substances that produce changes in perception, mood and cognitive processes.

Psychedelics affect all the senses, altering a person’s thinking, sense of time and emotions. They can also cause a person to hallucinate—seeing or hearing things that do not exist or are distorted.

There are many different kinds of psychedelics. Some occur naturally, in trees, vines, seeds, fungi and leaves. Others are made in laboratories.

LSD (Lysergic acid diethylamide) is made from a substance found in ergot, which is a fungus that infects rye.

Psilocybin is a naturally occurring substance found in mushrooms and is found in many parts of the world.

Mescaline is derived from the Mexican peyote and San Pedro cactus and produces similar effects to LSD.

DMT (Diemethyltryptamine) is structurally similar to psilocin, an alkaloid found in psilocybin mushrooms. It can be synthesized in the laboratory but is also a naturally occurring component of several plants.

DOM is a member of the DOx family of compounds which are known for their high potency, long duration, and mixture of psychedelic and stimulant effects.

2C-B (4-Bromo-2,5-dimethoxyphenethylamine) is a psychedelic drug first synthesised in 1974. 2C-B is considered both a psychedelic and a mild entactogenic. ‘Entactogen’ means ‘touching within’ and is a term used by psychiatrists to classify MDMA and related drugs.

Peyote Peyote (Lophophora williamsii) is the most well-known and potent psychedelic cactus, although the smallest and slowest growing. Instead of growing upward to form a column, it grows as ‘buttons’ low to the ground. It has been used by Native Americans for over 5000 years.

25[-x]-NBOMe NBOMe (N-methoxybenzyl) is the name for a series of drugs that have psychedelics effects. Reports indicate that there are a number of different versions of NBOMe available – all with differing effects.

How are they used?

Psychedelics have been used since ancient times by various cultures throughout the world for their mystical and spiritual associations. LSD, magic mushrooms, Mescaline and DMT are usually swallowed, smoked or inhaled. Mushrooms are usually eaten fresh, cooked or brewed into a ‘tea’.

Occasionally, they may be mixed with tobacco or cannabis and smoked. Mescaline is usually swallowed. Peyote buttons may be ground into a powder and smoked with cannabis or tobacco. The buttons can also be chewed or soaked in water to produce a liquid.

Most forms of NBOMe are inactive if swallowed, and the most common methods of taking them are under the tongue, held in the cheek or snorted.

Generally, people who use psychedelics don’t take them on a regular basis, but on occasions that may be weeks or months apart.

There is no safe level of drug use. Use of any drug always carries some risk. It’s important to be careful when taking any type of drug.

Psychedelics affect everyone differently, based on:

The effects of psychedelics can last several hours and vary considerably, depending on the specific type of psychedelic. The following may be experienced during this time:

Sometimes you can experience a ‘bad trip’, which is frightening and disturbing hallucinations. This can lead to panic and unpredictable behaviour, like running across a road or attempting suicide.

If you take a large amount or have a strong batch, you are likely to experience negative effects of psychedelics.

The most common long-term effect of psychedelic use is the ‘flashback’. Flashbacks are a re-experience of the drug and can occur days, weeks, months and even years later.

Flashbacks can be triggered by the use of other drugs or by stress, fatigue or physical exercise. The flashback experience can range from being pleasant to causing severe feelings of anxiety. They are usually visual and last for a minute or two.

Using psychedelics with other drugs

The effects of mixing psychedelics with other drugs, including alcohol, prescription medications and over-the-counter medicines, are often unpredictable.

Mixing psychedelics with stimulant drugs increases the stimulant effects and can further increase heart rate and place the body under extreme stress. Stimulants can also increase anxiety which can lead to a negative experience.8

Combing psychedelics with depressant drugs such as alcohol may further reduce coordination and increases the chances of vomiting. Alcohol may also decrease the effects of the psychedelic.8

There is no safe way to use psychedelic drugs.

If you do decide to use them, it’s important to consider the following.

People with mental health conditions or a family history of these conditions should avoid using psychedelics.

Taking psychedelics in a familiar environment in the company of people who are known and trusted may alleviate any unpleasant emotional effects. Anxiety can be counteracted by taking deep, regular breaths while sitting down.

Use of psychedelics is likely to be more dangerous when:

Most psychedelics produce tolerance rapidly and psychological dependence can occur in some people. The development of physical dependence is not well supported by evidence and there are no withdrawal symptoms even after chronic use.