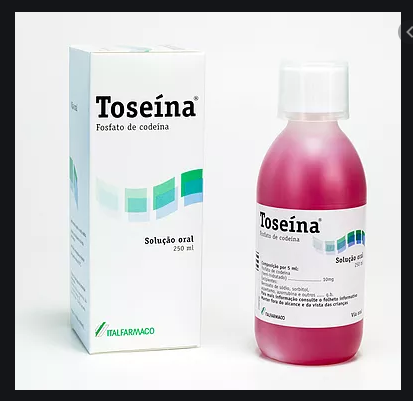 Toseina is a brand of codeine phosphate hemihydrate syrup made by Italfarmaco, a private Italian multinational company located in Milan, operating in Italy and abroad in both the pharmaceutical and fine chemical divisions. Toseina is used by itself or combined with other drugs and is used as a cough suppressant in individuals above the age of 18. Codeine is an opiate and prodrug of morphine used to treat pain, coughing, and diarrhea and is commonly abused. It is found naturally in the sap of the opium poppy, Papaver somniferum.

Codeine was a DEA Schedule II controlled substance. Substances in the DEA Schedule II have a high potential for abuse which may lead to severe psychological or physical dependence. Recently, the Drug Enforcement Administration  moved the substance into Schedule III, so it is more closely monitored and controlled when it is placed in cough syrups.

How does Toseina work (mechanism of action)?

Toseina contains codeine a narcotic pain-reliever and cough suppressant similar to morphine and hydrocodone. Moreover, a small amount of codeine is converted to morphine in the body. The precise mechanism of action of Toseina is not known; however, like morphine, codeine binds to receptors in the brain (opioid receptors) that are important for transmitting the sensation throughout the body and brain. Codeine is a narcotic cough suppressant. It affects the signals in the brain that trigger cough reflex.

What are the side effects of Toseina?

The most frequent side effects of codeine include:

Serious side effects of Toseina include:

Is Toseina addictive? Is it a controlled substance?

Many are asking how quickly can one become addicted to Toseina, it is important to note that Toseina is habit forming (addictive). Mental and physical dependence can occur but are unlikely when used for short-term cough relief. Using Toseina during pregnancy can cause opioid withdrawal syndrome in the newborn, which may be life-threatening if not treated.

If Toseina is suddenly withdrawn after prolonged use, symptoms of withdrawal may develop. The dose of  Toseina should be reduced gradually in order to avoid withdrawal symptoms.

Can I drink alcohol with Toseina?

What other drugs interact with codeine?

Drugs that stimulate and also block opioid receptors (for example, pentazocine) reduce the effect of codeine. Such drugs should not be combined with Toseina.

Drugs that block the action of acetylcholine (anticholinergic drugs) increase the occurrence of urinary retention and constipation when combined with Toseina.

Monoamine oxidase inhibitors (MAOIs) class of antidepressants (for example, isocarboxazid [Marplan], phenelzine [Nardil], tranylcypromine [Parnate], selegiline [Eldepryl], and procarbazine [Matulane]) significantly increase the action of Toseina. In addition, Toseina should not be used in patients taking MAOIs or within 14 days of stopping MAOIs.

What is the dosage for Toseina? How is it taken?

Read the Medication Guide provided by your pharmacist before you start taking Toseina. If you have any questions, ask your doctor or pharmacist. Take this medication by mouth as directed by your doctor. You may take this drug with or without food. If you have nausea, it may help to take this drug with food. Ask your doctor or pharmacist about other ways to decrease nausea (such as lying down for 1 to 2 hours with as little head movement as possible).

If you are using the liquid form of Toseina, carefully measure the dose using a special measuring device/spoon. Do not use a household spoon because you may not get the correct dose.

The dosage is based on your medical condition and response to treatment. Do not increase your dose or use this drug more often or for longer than prescribed, because your risk of side effects may increase. Properly stop the medication when so directed.

Toseina is a controlled narcotic and it has potential for abuse. People with current or previous drug addiction problems should be monitored closely for addiction. Dependence and addiction can occur with codeine, even at prescribed dosages when taken over long periods. Misuse of Toseina can lead to serious cardiac events and sudden death. It is important to be aware of drug interactions and effects on pregnancy. ALSO READ: How to Spot Fake Qualitest Codeine Products

How Toseina Abuse and Addiction Develops

Codeine in Toseina attaches to the same cell receptors targeted by illegal opioids like heroin. Consuming more than the daily recommended therapeutic dose of Toseina syrup can produce euphoria similar to that produced by other opioid drugs; people addicted to codeine may consume several times the recommended, safe amount. Also, codeine act as depressants of the central nervous system, producing sedating or calming effects. When abused, Toseina directly or indirectly cause a pleasurable increase in the amount of dopamine in the brain’s reward pathway. Repeatedly seeking to experience that feeling can lead to addiction—a chronic relapsing brain disease characterized by inability to stop using a drug despite damaging consequences to a person’s life and health.

Cough syrups like Toseina have been widely abused for years, especially by adolescents who want to get high or drunk without stealing alcohol or paying for illicit drugs. Since cough syrups are legal for purchase, many people have abused these medicines; however, since the alcohol has been removed and codeine-based cough syrups restricted, abuse patterns in the US have changed.

One of the ways that people abuse codeine cough syrups is by mixing Toseina into alcoholic beverages or nonalcoholic sodas, creating a dangerously intoxicating mix with several nicknames. The most famous names are “lean,” “purple drank,” “syrup,” and “sizzurp.” These mixed drinks have been popularized by rappers and pop stars.

One of the possible side effects of Toseina is lowering of cortisol a steroid hormone that regulates a wide range of processes throughout the body, including metabolism and the immune response. It also has a very important role in helping the body respond to stress. Studies have shown that codeine use is linked to significant decline in cortisol values. SEE:Promethazine with Codeine Syrup Uses, Dosage, Side Effects, Addiction, Pictures