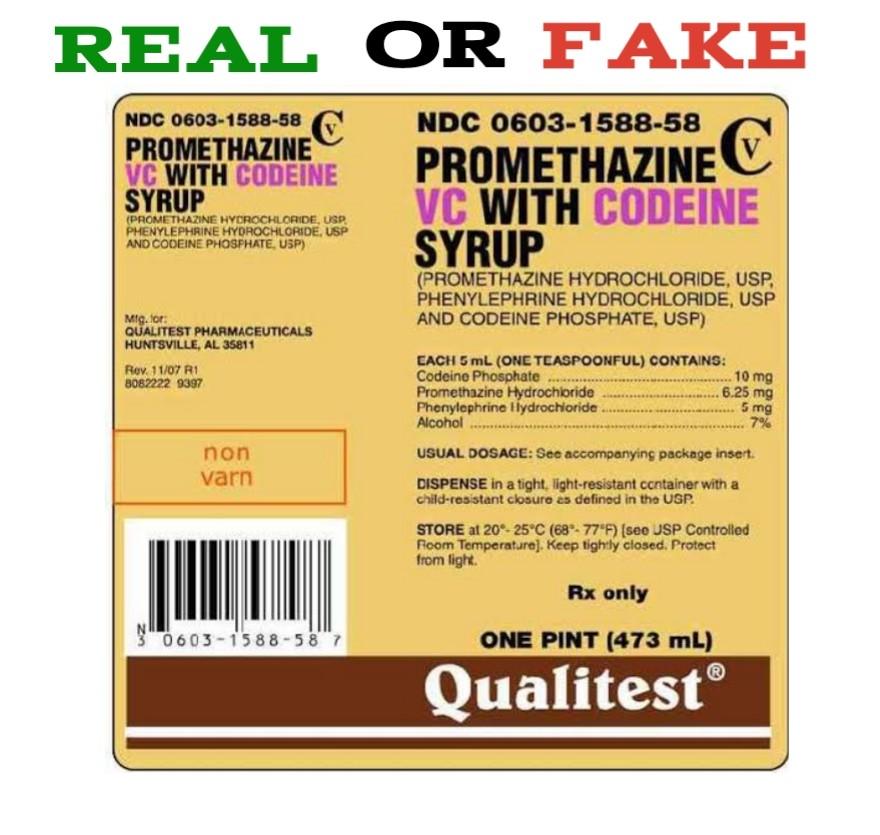 Promethazine with codeine syrup is indicated for the temporary relief of coughs and upper respiratory tract symptoms related to allergies or the common cold. Promethazine is an antihistamine, similar to products available over-the-counter like Benadryl, Claritin, Zyrtec, and Allegra. Antihistamines are typically used to treat the symptoms associated with the allergies and the common cold—they help reduce inflammation and swelling and dry up excess secretions, for example, watery eyes and runny nose. Promethazine is also used to treat pain, nausea and vomiting, motion sickness, and sedation.

Codeine is an opioid analgesic which is typically used to help relieve pain. It is also an antitussive, meaning that it can be used to help relieve coughing. In November 2011, Qualitest Pharmaceuticals  announced that the U.S. Food and Drug Administration has approved Acetaminophen and Codeine Phosphate Oral Solution USP, 120mg/12mg per 5mL. Acetaminophen and Codeine Phosphate Oral Solution is a strong prescription pain medicine that contains an opioid (narcotic) that is used to manage mild to moderate pain when other pain treatments such as non-opioid pain medicines do not treat your pain well enough or you cannot tolerate them.

There is a potential for misuse of codeine-containing products. Codeine use often starts out innocently with a prescription for a codeine-based products. Because codeine is less regulated than some opiates considered to be more dangerous (such as morphine and OxyContin), getting and abusing it is relatively easy. This is despite the fact that codeine is very similar chemically to drugs such as morphine and hydrocodone. Though less potent, codeine provides effects similar to morphine.

The effects of codeine include:

As an opiate, codeine runs a high risk of its users developing a tolerance and eventually a dependence on it. Although many people begin using codeine to relieve a legitimate condition, it is frequently abused as tolerance develops. Many codeine users begin to turn to the drug to cope with all of their physical pain and eventually their emotional pain as well. If you or someone you care about is struggling with a codeine problem, get help today.

Although some people think the drug seems harmless, at high enough doses, codeine use can lead to respiratory failure, coma, and even death. This risk is especially high when codeine is combined with other central nervous system depressants such as alcohol or other opioids.

An addiction to codeine may develop from continued abuse of the drug in its cough medicine or pill form. Codeine can lull its users into a false sense of security because many people do not consider it to be as powerful or addictive as its opiate family members.

Codeine is considered a gateway drug to other opiates, including morphine and even heroin.

Many people don’t stop at codeine. They try to reach a better high by mixing it with other substances, including alcohol. Because codeine and alcohol are both central nervous system (CNS) depressants, combining them can lead to dangerous levels of depression in the brain and respiratory failure. Learn the criteria of diagnosing codeine addiction today.

Codeine and Other Drugs

For some people, codeine is only a piece of a larger web of addictions. Sometimes, it is the gateway drug into addiction to other substances, especially other opiates like oxycodone or morphine. Because multiple drugs in a user’s system can change the way treatment is administered, it is important to be honest in discussing all of your addictions with a treatment counselor. No matter what drugs you use, there is a treatment solution for you.

Codeine cough syrup is used to make “purple drank.” Purple drank is a recreational form of the drug made by mixing prescription-grade (codeine) cough syrup with soft drinks, such as Sprite or Mountain Dew, for consumption in large doses. It is also called lean, syrup and sizzurp.

Alarmingly glorified in popular culture, purple drank has been referenced throughout multiple songs and TV shows. It is mentioned in songs by artists like Lil’ Wayne and Three 6 Mafia. Rapper Lil’ Wayne was admitted to the intensive care unit in March 2013 with seizures and unconsciousness caused by extremely high levels of codeine. Though he survived, he was in critical condition after having his stomach pumped three times to remove the drug from his system.

According to the indictment, from January 2016 until February 2017, the co-conspirators allegedly created a significant number of fraudulent and forged prescriptions for codeine-promethazine syrup. It is also alleged that individuals were recruited to travel from Columbus, Ohio to various pharmacies in Ohio to fill the fake prescriptions. Apart from fake prescriptions, fake codeine products also abound. Here is how to recognize a counterfeit medicine;

Spot the difference: Is the lettering on the packaging hazy and printed flat (rather than raised), or is the expiry date missing?

Read carefully: Are the labelling and patient information in a language you understand? If there are misspelled words, contact the manufacturers – it can be a telltale sign.

Use your senses: Is the medicine the same size, shape, texture, colour and taste as your previous prescription?

Feel for consistency: When you handle the drug does it fall apart easily? If so, it could signal a fake.

Do a price check: Does the cost of the drug seem very cheap in comparison with your official provider? If it’s much lower, it could be a scam.

Licensing. Only buy from certified online pharmacies. Search the website for a declaration of authenticity or certification and double- check this with your country’s official drug regulatory agency. For example, pharmacies in the UK that are registered with the Royal Pharmaceutical Society of Great Britain can display a logo on their website.

Promises. Statements such as ‘no risk’ and ‘money-back guarantees’ can be key giveaways of a counterfeit website.