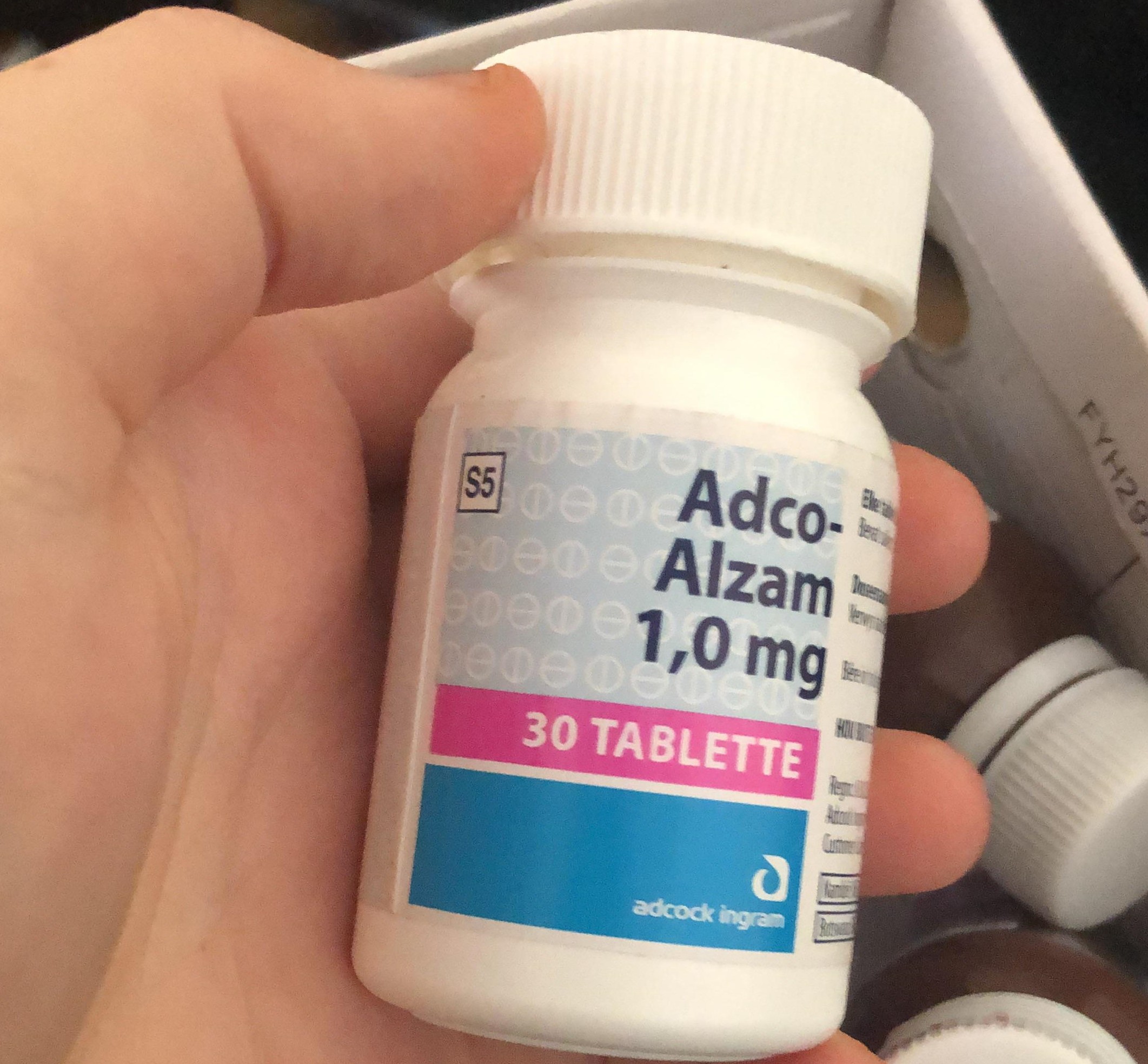 Adco Alzam is a generic type of Xanax that has been identified as containing Alprazolam. It is a product of Adcock Ingram a leading South African pharmaceutical manufacturer listed on the Johannesburg Stock Exchange. The Company manufactures, markets, and distributes a wide range of healthcare products and is a leading supplier to both the private and public sectors of the market.

Oral immediate-release tablets of Adco Alzam comes in 4 distinct strengths: 0.25 mg, 0.5 mg, 1 mg, and 2 mg. Alprazolam the active ingredient in this medication is a controlled substance in many countries. However, the abuse of Adco Alzam has continued to thrive in countries like South Africa as many young people turn to this anti-anxiety medication.

What is Adco Alzam used for?

As a brand of Alprazolam, Adco Alzam is used to treat anxiety and panic disorders. It belongs to a class of medications called benzodiazepines which act on the brain and nerves (central nervous system) to produce a calming effect. It works by enhancing the effects of a certain natural chemical in the body (GABA). Some doctors describe GABA as a natural tranquilizer. GABA halts brain signals that would otherwise excite the brain and lead to anxiety or panic. Higher levels of the chemical may cause a person to feel relaxed or sleepy. Adco Alzam is a potent drug which is more powerful than some other benzodiazepines. Also, unlike some other benzodiazepines, Adco Alzam may trigger the brain’s reward system. This possibility puts people at higher risk of developing an addiction to Adco Alzam compared to other benzodiazepines.

How long does Adco Alzam take to work?

Adco Alzam is taken by mouth and absorbed quickly by the bloodstream. Some people may first begin experiencing the effects of Adco Alzam within 5 to 10 minutes of taking the pill. Almost everyone will feel the effects of the drug within an hour. One of the reasons why Adco Alzam is so effective for treating panic is that peak impact from the dose comes quickly. Most people will experience it between one and two hours after taking their dose.

In general the effects of the drug usually appear within 1 hour, with one small scale study finding an average onset time of 49 minutes with oral administration. Adco Alzam also leaves the body quickly. Its half-life is 11.2 hours in healthy adults, meaning that the body removes about half of the Xanax that it has absorbed in just over 11 hours.

What are the effects and risks of Adco Alzam pills?

Adco Alzam pills, like other prescription tranquilizers, is intended to slow normal brain activity and function, which may result in slowed breathing (i.e., respiratory depression), slurred speech, dilated pupils, disorientation, fatigue and decreased coordination. In high dosages, Adco Alzam pills can cause impaired memory, judgment, and coordination, irritability, paranoia, and thoughts of suicide. Some people can become agitated or aggressive.

Repeated use of  white Xanax bars can lead to dependence, which can result in withdrawal symptoms when use is reduced or stopped. Talk to a medical professional to develop a safe strategy for reducing use. Tolerance to Adco Alzam can develop quickly, causing an individual to consume higher dosages to achieve the same result, increasing the risk of harming themselves. This includes the potential for overdose, particularly when taken with other depressants such as alcohol, benzodiazepines and/or opioids (i.e., fentanyl, heroin, and morphine).

Does Adco Alzam make you sleepy?

In practice, many of the benzodiazepines like alprazolam (Adco Alzam) are also used to induce sleep. One drawback of benzodiazepines is that they reduce duration of deep or slow-wave sleep, which is necessary for a person to feel refreshed the next morning. Another problem is tolerance, the need for more and more of the drug to obtain the same effect. Stopping any of these medications abruptly after long-term use can cause rebound insomnia that is worse than the initial sleeping problem.

The FDA warns that there are serious risks associated with using Alprazolam or other benzodiazepines at the same time as opioid analgesics, like oxycodone and hydrocodone, among others, or with opioid-containing cough products. Taking opioids and benzodiazepines together can result in extreme sleepiness, slowed or difficult breathing, coma, or death.

You should talk to your doctor about alternative treatments as well as the serious risks involved before taking opioids and benzodiazepines like Adco Alzam Xanax together.

Adco Alzam pill can make you drowsy and decrease your ability to drive safely or operate machinery. You may become particularly sleepy if Xanax is taken with other drugs that cause drowsiness, or if you’re elderly or debilitated.

Adco Alzam Xanax may be habit-forming, so do not take higher doses of the medication or use it for a longer time than your doctor recommends.

Before taking Adco Alzam, tell your doctor if you have:

Talk to your doctor if you have symptoms of your condition between doses. Do not increase the dose without talking to your doctor first, even if you think the medication doesn’t work anymore. Read 44 175 White Pill: Everything You Should Know

Adco Alzam pills and other benzodiazepines are among the most widely abused drugs available today. Xanax is often abused for the fast-acting, relaxed “high” it can give to people who take it, including people without a prescription.

According to the National Institute on Drug Abuse (NIDA), benzodiazepines like Xanax were responsible for most of the emergency-room visits attributed to central nervous system depressants in 2009.

Long-term abuse and addiction to this drug is associated with depression, psychotic experiences, and aggressive or impulsive behavior, according to the Coalition Against Drug Abuse.

Adco Alzam can harm a developing fetus. Before taking this drug, tell your doctor if you’re pregnant. Drugs like Adco Alzam may cause birth defects, particularly if taken during the first trimester of pregnancy. Taking it later in pregnancy may have other harmful effects on your baby too.

Adco Alzam pills are not safe to use while breast-feeding, either. Tell your doctor if you’re breast-feeding before taking Adco Alzam, because taking the medication while nursing can cause harmful side effects to the nursing baby.  It is also important to note that Adco Alzam has not been proven safe or effective in children under 18.

Do not stop taking Adco Alzam without talking to your doctor. Stopping the drug abruptly can make the condition worse. This is typical of many benzodiazepine drugs, including Ativan, Librium, Valium, and others.

Adco Alzam withdrawal symptoms can include:

Withdrawal from Adco Alzam should be done under the supervision of a doctor, who will probably reduce your dosage gradually to prevent withdrawal symptoms.

Side Effects of Adco Alzam

Call your doctor right away if you have any of these signs of an allergic reaction to Xanax:

Common side effects of Xanax are:

Most side effects with Xanax happen when first starting the medication and these usually go away. Still, you should talk to doctor about any side effects you have, particularly if they are severe or don’t go away.

Know the signs of an overdose.

People having a drug overdose may have one or more of the following signs:

All signs of an overdose should be treated as a medical emergency. ALSO READ: The Effects of B707 Blue Pill High On your Body