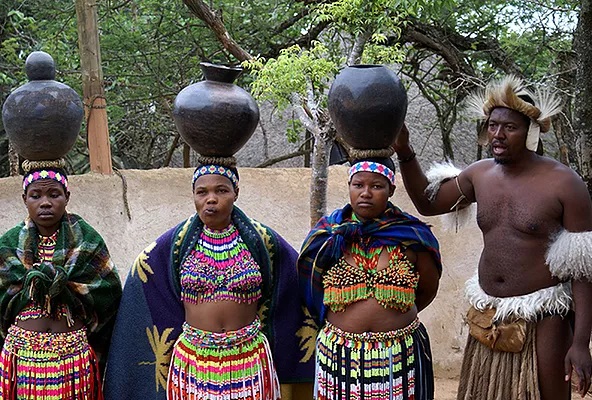 Waist beads are a traditional African accessory that consist of small glass beads on a string or wire worn around the waist or hips. They come in different colors and shapes and may also include decorative stones, crystals, or charms. Waist beads have been worn for centuries by women in many West African cultures. In more recent years they’ve gained popularity among women in the West. They’re also referred to as belly beads, waistline beads, or beaded waist chains.

In Ghana, Nigeria, Senegal, and other West African countries, waist beads are a symbol of femininity, fertility, sensuality, and spiritual well-being. Today, in both Africa and the United States, women use waist beads for aesthetic and practical purposes.

In traditional African societies, there are different myths and beliefs surrounding the significance and use of waist beads. There are four major reasons why the use of waist beads is popular across women in cultures: sexual maturity; sign of chastity; sexual appeal and body shaping.

Ghanaians believe that by wearing these waist beads fat will not go to the belly; instead fat will go to the hips, butt, and legs. Many societies also believe that women’s waist beads are said to possess the power to attract and evoke deep sexual feelings for men. Young ladies especially the married ones are advised to continue wearing waist beads as it “charms” men to remain faithful. Some cultures believe that if a woman stops wearing her beads, the husband might be tempted to cheat with another woman who puts them on.

Many women have a strong belief that waist beads serve as magical protection against rapist. According to her, any woman wearing waist beads who is confronted by a rapist should just look for a hard ground surface and tear the beads. The clattering of the beads on the hard ground will magically make the man lose erection immediately. Despite peoples attempt to demystify the waist bead, it has today become seen as that which has potent powers to make a man, including the impotent, aroused.

The Yoruba tribe of Nigeria also have a popular belief in the power of the waist bead to serve as birth control. The beads are purportedly laced with charms and worn by women to prevent unwanted pregnancy.

Certain cultures especially in Ghana also hold the belief that waist beads are the best cure for convulsions in children.” It is believed that when a child suffered convulsions in the past, all that was needed was to place the child on the bare floor in a corner of a room. Any woman with beads on her waist would gently remove them and place them on the sick child. Within five minutes, the child would be cured.

Traditionally, charmed waist beads are worn by women to ward off negative energy from the body and to close in positive or protective energy around the body. They are especially worn by pregnant women to protect their unborn babies too.

In addition, there are also cultures that believe waist beads tell whether a woman is a virgin or not. When a girl starts menstruating, her parents give her waist beads to show that she is now ripe for marriage. The way the waist bead moves when she walks determines if she is reserved or not. SEE: Importance Of Waist Beads In Love Making 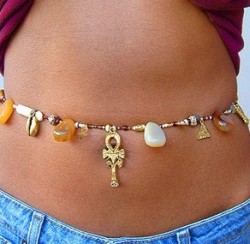 According to a study on the subject matter, there is a large gap between the academic knowledge of beads and social knowledge of beads, both sides play integral parts in the contemporary use of beads. Some women who are deeply rooted in spiritual things also wear these beads for good luck. Others believe it does bring them peace, good night rest etc. They also wear them during meditation. They claim it helps bring protection to their heart, mind, body and soul. Hence, they use it against bad omen.

Anecdotal evidence suggests that upon addition of precious stones, waist beads take on healing or rejuvenation qualities; depending on ailment or what needs to be enhanced (i.e. love, physic powers, balancing).

A research conducted in Ghana, reported thus; “My witchcraft is a snake, [and] lies on my breast, in my eyes and in my private. My waist beads are also [witch-like] as well as my hairs’’. This study titled “Children for Death”: Money, Wealth, and Witchcraft reported that witchcraft maintained a physical presence in its abilities to bring about sickness, a material capacity to generate sudden levels of income, and a social tendency to ruin relations among kin. The destructive powers of witchcraft were subject to domination by the medicinal remedies and ritual performances of witch-catching shrines and the healer priests who owned and operated them. This study is the only research in which African beads were quoted as been involved in witchcraft.

African waist beads are not witchcraft but traditional African fashion accessory that is usually made of smalls beads on a string and worn around the waist or hips. They are handmade and have been used by women for centuries to feel more feminine and beautiful. SEE: Meaning of African Waist Beads Colors

How to Use Waist Beads For Weight Loss