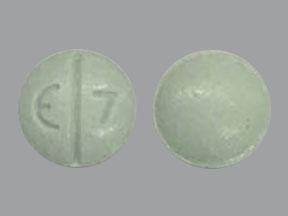 The green round pill with the imprint E 7 has been identified as Oxycodone Hydrochloride 15 mg. It is supplied by Epic Pharma, LLC. Oxycodone is used in the treatment of chronic pain; pain and belongs to the drug class narcotic analgesics. Oxycodone is made by modifying thebaine, an organic chemical found in opium. Designated as an opioid, or semi-synthetic opiate, oxycodone shares a general classification with heroin, hydrocodone, and oxymorphone. Oxycodone is classified as a Schedule II drug. People prescribed an oxycodone-based painkiller may be suffering from cancer, arthritis, or other physical disorders, or they may receive a short-term prescription after surgery or trauma. Prescription forms of oxycodone are designed to provide around-the-clock relief.

How Does E 7 Oxycodone Pill Work?

When you take E 7 Pills, it releases a flood of dopamine that makes you feel pleasant or even euphoric. As this happens, your brain starts to be rewired to feel like it should try to continue to seek the stimulus that led to the pleasant feeling, which is why you might start experiencing the psychological desire to continue using oxycodone.

Another key component of how E 7 Pill works rely on looking at the fact that it suppresses the respiratory system. This is a side effect of the drug on the brain stem. As your breathing slows down, it can become dangerous or deadly, so it’s important to be aware of the effect of oxycodone and other opioids.

How quickly oxycodone starts to work is another question you may have. The answer is that it depends on a few things including your individual body chemistry, what version you take, how often you take it, and the strength of the dose. For example, if you take an extended-release version of oxycodone, it’s going to take longer for it to work.

The unfortunate reality is that even with the time-release version, a lot of people abuse this drug by chewing it or crushing it up and snorting it, or injecting it, which leads to a faster onset time.

What Happens When You Take E 7 Pill?

When you take E 7 oxycodone Pill or any opioid pain reliever, it binds to and activates the opioid receptors in the central nervous system. When this happens, the drug raises a person’s tolerance for pain and changes how they sense pain overall.

Along with pain relief, oxycodone and other opioids also trigger a flood of dopamine into the brain, which is a feel-good neurotransmitter. When this happens, the person who has taken the oxycodone will likely feel a sense of euphoria and well-being. This is considered getting high from oxycodone, which then creates a reward response in the brain, which is how addiction occurs.

Also possible with oxycodone is the development of physical dependence. Physical dependence on a drug like oxycodone indicates that a person has a tolerance to it from taking the drug for an extended time, and if the person stops taking it suddenly they go through withdrawal.

It’s important for people who are prescribed oxycodone follow the dosage instructions provided by their physician. The typical starting dosage of oxycodone for an adult who’s never used opioids before ranges from five to 15 mg every four to six hours. With an extended-release version of oxycodone, the starting dosage is typically 10 mg taken every 12 hours.

Also important is taking oxycodone in the way it’s intended. Some people who are chasing a high will crush up oxycodone and snort the tablets, or they might dissolve tablets and inject them. This kind of oxycodone abuse makes the drug riskier because it reaches the brain more quickly and is more likely to lead to serious consequences or death.

An oxycodone overdose death is a possibility if a person abuses this drug. As with other opioids, E 7 pill depresses the activity of the central nervous system. This depression includes respiratory depression, so an opioid overdose means that someone has taken a dose so large that it slows their breathing to the point that’s dangerous or deadly.

Someone who is experiencing an overdose on E7 pill will likely show symptoms such as losing consciousness or nodding off, having skin or nails with a bluish tint, slow or shallow breathing, low blood pressure, delusions, hallucinations, shaking, or seizures.

An overdose on oxycodone can be accidental because someone simply doesn’t realize how much of the drug they’re taking, or they might mix oxycodone with something else, such as alcohol or benzodiazepines, which causes further respiratory depression. The effects of an oxycodone overdose are reversible in some cases, but immediate medical attention is necessary.

To avoid an oxycodone overdose death, it’s important to make sure medications are properly labeled and stored, and dosage instructions are carefully followed. It’s also extremely important to speak with your physician about any other drugs or substances you might regularly use, to ensure they won’t increase the risk of an oxycodone overdose death.

What are the Side Effects of E 7 Pills

Some of the side effects of oxycodone include nausea, vomiting, and drowsiness. Some of the more serious adverse side effects related to oxycodone’s effect on the central nervous system can include lightheadedness, headache, weakness, changes in mood, breathing problems, confusion, pinpoint pupils, and fainting. SEE: Can You Snort Oxycodone?