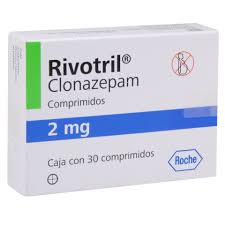 What is Rivotril  Drug?

Rivotril is a brand of clonazepam, a prescription medication belonging to a group of drugs called as benzodiazepines. Rivotril pills exert their effect primarily by the modulation and slowing down of brain activity which results in the production of a calming effect. Klonopin and Rivotril are the same drug just different brands

Rivotril is used to prevent and control certain types of seizure disorders such as epilepsy in adults and children. It is also used to treat anxiety and panic disorders. Either alone or combination with other drugs, the other medical uses of rivotril include:

Parasomnia and other sleep disorders

Side Effects of Rivotril Pill

Common side effects of Rivotril include

Serious Side Effects of Rivotril

Rivotril can slow your thinking and motor skills, Do not drive, operate heavy machinery, or do other dangerous activities until you know the effect of rivotril on you and how your body responds to the medication.
It has been reported rivotril may cause suicidal thoughts or actions in about 1 in 500. It can sometimes also worsen depression and panic attacks. In addition, drinking alcohol while taking rivotril has been found to increase sleepy tendencies and or dizziness

Also inform your doctor if you:

Taking Rivotril in pregnancy may harm your unborn or developing baby. Using rivotril during pregnancy puts your unborn child at risk for serious birth defects. These defects can happen as early as in the first month of pregnancy, even before you know you are pregnant. Some of the likely infant related risks associated with the use of rivotril clonazepam in pregnancy include: breathing problems, feeding problems, hypothermia, and withdrawal symptoms. In addition, rivotril can pass into breast milk, it is strongly advised that you talk to your healthcare provider about the best way to feed your baby if you are currently on rivotril.

Can One Get High from Taking Rivotril Pills

The street value of rivotril drug has been on the rise largely due to its addictive nature and its tendency to cause dependence. Rivotril is a brand of clonazepam a federally controlled substance (C-IV) in the United States and many countries around the world, as such it is illegal to use this medication or any other pharmaceutical preparation similar to rivotril to get “high”. Inhaling or  snorting rivotril is also accompanied by several health risks and accompanying behavioral and mental health challenges.
Rivotril Overdose and withdrawal Symptoms

If you exceed the dose of rivotril call your healthcare provider or local Poison Control Center, or seek emergency medical attention immediately. The overuse of rivotril can cause coma, diminished reflexes, confusion and sleepiness. The process through which the brain receptors become adapted to a drug is called as tolerance. Tolerance requires more amount of the drug to elicit the same effect. With rivotril tolerance is almost always associated with dependency of the drug. After continued regular used of rivotril,

So, once you have been on rivotril for a long period, there is an increased likelihood that you are dependent on the drug. If this occurs, it is quite dangerous to stop the use of rivotril suddenly. If you do so, it can cause seizures and withdrawal symptoms, such as hallucinations, trouble sleeping, cramps, shaking, sweating, headaches and anxiety. If any of these symptoms occurs call your doctor or healthcare provider immediately

How to Spot A Fake Klonopin Pill

CTN 10 Pills- All You Wanted To Know