Prevent Explosion: See How to Check Expiry Date of a Gas Cylinder 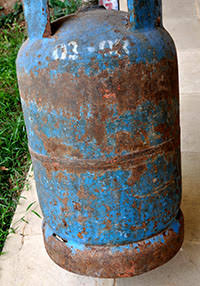 I must confess that before writing this article I never knew cooking gas cylinders do expire. I felt so because they were made from metal as such they should last for a lifetime. Perhaps I was not alone in this line of thinking hence the need to put up an article that might save a life or even many.

I bought my first gas cylinder immediately after I moved into my first apartment as a bachelor and even after I got married we kept on using the same cylinder even though we bought a backup cylinder as the family grew larger. For years, not for once had it crossed my mind that we could be using an expired gas cylinder.

According to the Programme Manager of the  National LPG Expansion Implementation Plan (Office of the Vice-President), Dayo Adeshina, about 90 percent of the cooking gas are in expired gas cylinders. Industry reports showed although low utilization of LPG constitutes a source of worry to the government; it remains more worried about the danger associated with the use of expired cylinders. Consequently, it has raised an alarm over the non-testing and proliferation of expired gas cylinders in circulation across the country, saying cylinders outlive their safety after 15 years. Adeshina said most cylinders in Nigeria are over 30 years old and are very dangerous for use.

As a general safety principle, cooking gas cylinders must not exceed five years: most people using gas cylinders hardly remember when it was bought. It is important to keep track of the days and replace them as soon as possible.

How to check the expiry date of a gas cylinder

The steps to check the expiry date are very simple and basic. The expiry of the LPG cylinder can be found on one of the metal strips that connect the body of the cylinder to the top ring (handle). It is mentioned on the inner side of the strip. The strip has any of the alphabets from A to D painted on it along with a number. Decoding the expiry date is simple. The alphabet represents the month it expires while the number indicates the year. A year is divided into four quarters:

A – January to March

B – April to June

For example, your cylinder has ‘A 18  painted on the metal strip. The alphabet A represents the month of March and 18 indicates the year 2018.

Send this article to as many as you can or better still share it on your social media handles, you may be saving the lives of many in the process.

How To Prevent Child Accidents

How to Check For Drug Interactions
How to Check Expiry Date of a Gas Cylinder
January 29, 2020 Family & Community HealthPublic HealthLeave a comment