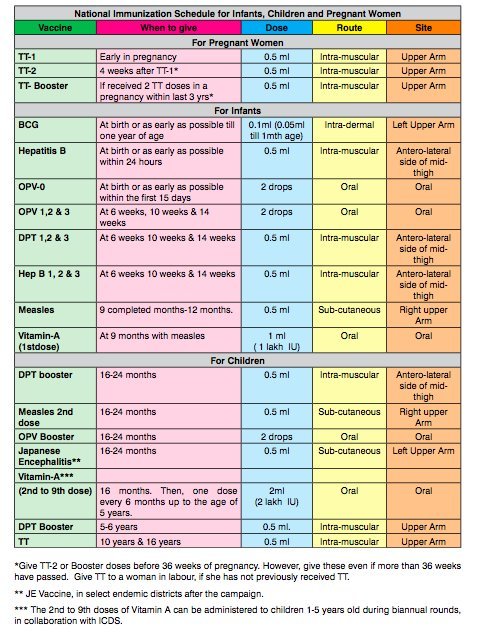 Universal Immunisation Programme (UIP) is a vaccination program launched by the Government of India in 1985. It became a part of the Child Survival and Safe Motherhood Programme in 1992 and is currently one of the key areas under the National Rural Health Mission since 2005. Immunization is a global health and development success story, saving millions of lives every year. Vaccines reduce the risks of getting a disease by working with your body’s natural defences to build protection. When you get a vaccine, your immune system responds.

We now have vaccines to prevent more than 20 life-threatening diseases, helping people of all ages live longer, healthier lives. Immunization currently prevents 2-3 million deaths every year from diseases like diphtheria, tetanus, pertussis, influenza, and measles. Immunization is a key component of primary health care and an indisputable human right. It’s also one of the best health investments money can buy. Vaccines are also critical to the prevention and control of infectious-disease outbreaks. They underpin global health security and will be a vital tool in the battle against antimicrobial resistance.

About-BCG stands for Bacillus Calmette-Guerin vaccine. It is given to infants to protect them from tubercular meningitis and disseminated TB.

Route and site- BCG is given as an intradermal injection in the left upper arm.

Route and site – OPV is given orally in the form of two drops.

When to give- Hepatitis B vaccine is given at birth or as early as possible within 24 hours. Subsequently, 3 doses are given at 6, 10, and 14 weeks in combination with DPT and Hib in the form of a pentavalent vaccine.

Route and site- Intramuscular injection is given at the anterolateral side of the mid thigh.

About-Pentavalent vaccine is a combined vaccine to protect children from five diseases Diptheria, Tetanus, Pertussis, Haemophilus influenza type b infection, and Hepatitis B.

Route and site-Pentavalent vaccine are given intramuscularly on the anterolateral side of the mid thigh. SEE:Immunization Schedule Philippines

About -RVV stands for Rotavirus vaccine. It gives protection to infants and children against rotavirus diarrhoea. It is given in select states.

Route and site-5 drops of liquid vaccine or 2.5 ml (lyophilized vaccine) are given orally.

About- PCV stands for Pneumococcal Conjugate Vaccine. It protects infants and young children against disease caused by the bacterium Streptococcus pneumoniae.

When to give – The vaccine is given in two primary doses at 6 & 14 weeks of age followed by a booster dose at 9-12 months of age.

Route and site– PCV is given as intramuscular (IM) injection in antero-lateral side of mid- thigh. It should be noted that pentavalent vaccine and PCV are given as two separate injections into opposite thighs.

About– fIPV stands for Fractional Inactivated Poliomyelitis Vaccine. It is used to boost the protection against poliomyelitis.

When to give- Two fractional doses of IVP are given intradermally at 6 and 14 weeks of age.

Route and site- It is given as an intradermal injection at the right upper arm.

When to give-First dose of Measles or MR vaccine is given at 9 completed months to12 months (vaccine can be given up to 5 years if not given at 9-12 months ago) and the second dose is given at 16-24 months.

Route and site – Measles Vaccine is given as a subcutaneous injection in the right upper arm.

About– JE stands for Japanese encephalitis vaccine. It gives protection against Japanese Encephalitis disease. JE vaccine is given in select districts endemic for JE after the campaign.

When to give– JE vaccine is given in two doses, the first dose is given at 9 completed months-12 months of age and the second dose at 16-24 months of age.

About-DPT is a combined vaccine; it protects children from Diphtheria, Tetanus, and Pertussis.

When to give -DPT vaccine is given at 16-24 months of age and is called DPT first booster and DPT 2nd booster is given at 5-6 years of age.

About-TT vaccine has been replaced with Td vaccine in UIP to limit the waning immunity against diphtheria in older age groups.

When to give- Td vaccine is administered to adolescents at 10 and 16 years of age and to pregnant women.

Pregnant women- Td-1 is given early in pregnancy as the first dose and 4 weeks after Td1, the second dose of Td as Td-2 is given. Td- Booster is given if a pregnant woman has received 2 TT/Td doses in pregnancy within the last 3 years.* Intra-muscular Upper Arm.

Route and site- Td is given as an intramuscular injection in the upper arm. SEE: Immunization Schedule In Ghana