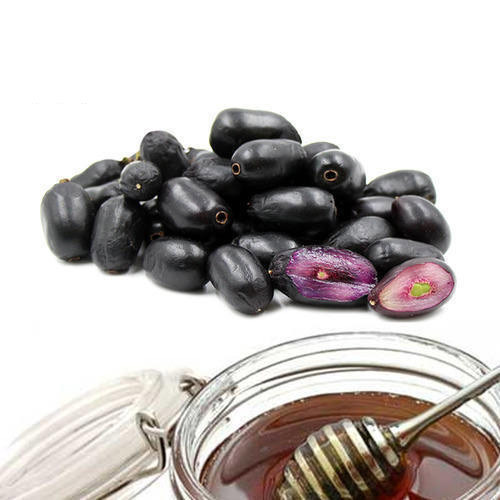 Jamun Honey is sourced from bees that feed and forage primarily on Indian blackberry commonly known as Jamun. It is collected from the south Karnataka region and is harvested in August when the Jamun flowers blossoms.  It is dark amber in color and comparatively less sweet than other honey.

The Indian blackberry (Jamun) is one of the most beneficial fruit for human health. It is also known by the name of black plum and is a summer fruit that is popular in every household. It belongs to the Myrtaceae family. The ancient system of medicine, Ayurveda, celebrates the fruit of Jamun for the several benefits it offers.

Jamun honey is a very good remedy for people suffering from diabetes, it has a low glycemic index compared to other kinds of honey which keep blood sugar levels under check as well as cures common diabetes symptoms and complications like excess thirst, urination, etc. Research has proven that jamun has a lot of potential to be used in making drugs that would be a safer option. Another research has shown that a 30% decrease can be seen in the levels of blood sugar when jamun itself is consumed daily. Secondary complications that are known to occur because of diabetes are also reduced with the consumption of jamun. Excess thirst and frequent urination are also kept under control with jamun.

In Ayurveda, Jamun honey is used to treat high blood pressure. This is because it contains antioxidant compounds that have been linked to lower blood pressure. Studies in humans have shown modest reductions in blood pressure from consuming honey. Jamun honey’s sweet flavor makes it an ideal substitute for sugar in the diet. Added sugar in the diet provides excess calories with no nutritional benefit. This can lead to an increased body weight, which comes with an increased risk of high blood pressure and diabetes. Jamun honey is a rich source of potassium. We all know that potassium prevents hypertension and hypertension is a significant risk factor for those who are prone to heart diseases. It is said that in each 100g serving of jamun, the amount of potassium present is 55g.

Some healthy nutrients like iron, calcium, potassium, and Vitamin C are present in high amounts in jamun. Because of the presence of these nutrients, it enhances the functioning of the immune system and strengthens your bones. Jamun is widely used in Ayurveda to relieve stress. Jamun Honey is rich in these nutrients and Its antioxidants and bacteria-fighting assets also help against fighting infections that are caused by viruses, bacteria, and fungi. According to doctors and scientists, honey has the highest number of antioxidants and when consumed daily can be beneficial for boosting immunity in the long run and this is why honey is known to be one of the best immunity boosting foods. It is always advisable to consume Jamun honey every morning before breakfast or even workout to get an extra kick of energy for the whole day. It also works as a cleansing toner that improves immunity in children.

Jamun honey is known to be one of the best home remedies for dry cough as well as wet cough. Research has also shown that drinking a tablespoon of honey can reduce irritation in the throat. Honey is the preferred natural remedy for cough, especially for kids, as it helps to relieve nocturnal cough, allowing proper sleep. The jamun fruit contains compounds like malic acid, tannins, oxalic acid, and gallic acid. These compounds are responsible for the antibacterial, gastroprotective, and antimalarial properties of the plant. In a new paper in the journal BMJ Evidence-Based Medicine, Oxford University researchers looked at 14 previously published studies related to the effectiveness of honey for the relief of URI symptoms. They found that compared to usual treatments (like over-the-counter meds and antibiotics), honey improved both cough frequency and severity, and may serve as an inexpensive alternative to antibiotics. The World Health Organization (WHO) recommends honey as a natural cough remedy. The American Academy of Pediatrics also recognizes honey as a treatment for a cough. However, they advise that Jamun honey is not suitable for children under the age of one year.

Anthocyanidins, elegiac acid, and anthocyanins are the compounds that are present in jamun. These compounds are well-known for their anti-inflammatory effect. Apart from that, they are also very good anti-oxidants. Thus, jamun honey helps in preventing cholesterol oxidation and the formation of plaque that can increase your heart risks. Honey contains over 180 substances—including natural sugars as well as a plethora of vitamins, minerals, and phytochemicals. Researchers conclude that the antioxidant and anti-inflammatory compounds in honey, in addition to its ability to counter oxidative stress, are the key factors responsible for its protective benefits. Older research shows that consuming high antioxidant honey indeed raises blood antioxidant levels and that replacing processed sugar with honey may help boost antioxidant defenses in healthy adults.

A recent review of honey’s use in complementary medicine, published in the journal Integrative Medicine Insights, states that honey possesses prebiotic properties. Prebiotics help to ferment beneficial bacteria in the gut, including bifidobacteria and lactobacilli. This shift has been linked to stronger immune function and enhanced mental well-being. The researchers also note honey’s anti-viral activity. Since ancient times, the jamun leaves which these bees feed on have been used in Ayurveda and are known to be atisara that are known to prevent diarrhea. It is very useful against Krimi, that is, worm infestation. They are considered to be very helpful in treating gastric disorders like dysentery, diarrhea, indigestion, and dyspepsia. They are also helpful for the gums and keep the teeth in good condition because of their anti-bacterial properties. Thus, jamun is a useful pachani.

Jamun honey is a safe food for most people, but not for all. Here are some potential risks of eating honey, including raw honey:

You should not give honey to infants under 12 months. Jamun honey can contain dust particles that may carry spores of the bacteria that cause botulism. Infants lack resistance to many germs, and they could get very sick. Using Jamun honey in cooking food for children should be safe, as heat destroys most bacteria.

Those who are prone to allergies should be careful about eating Jamun honey. Although honey allergies are rare, they do occur. Perhaps this is due to bee pollen in the honey. Bee pollen is a mixture of pollen and digestive enzymes from bees. It can trigger a serious allergic reaction. Also Read: Side Effects Of Raw Nigerian Honey

Side Effects Of Raw Nigerian Honey