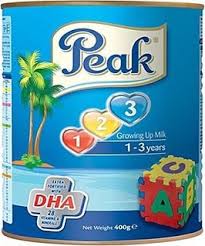 West African Milk Company Plc (WAMCO) produces Peak 123 in Nigeria. Many people in Nigeria know that Peak stands for tasty and nutritional dairy. All Peak products, including  Peak 123 milk are produced under the highest quality standards. The powdered milk and condensed milk, contain 28 vitamins and minerals, including vitamin B1, B12 and iodine.

Peak provide Nigerians with dairy products that aren’t just tasty but healthy as well. That’s why they are constantly working on the development of new Peak products which meet the needs of many consumers. In addition, they produce all Peak dairy products according to strict quality rules.

Ever since the introduction of Peak brand into the Nigerian market, the brand has continued to grow despite changing market conditions. Peak’s success is attributed to two things: first of all to a singular focus, which is to nourish Nigerians with quality dairy nutrition and convince the consumer that good nutrition is important. And secondly continuously explore and develop ways to stand out in the crowded shelves in stores and to touch the consumers in every stage of their lives. Also See Golden Morn

Peak 123 milk is the special kind of milk that is essential and supports the growth of toddlers. This powdered milk produced by Peak is one of the most effective milks out there right now. Just like the name says, it is recommended for children from age 1-3. Peak 123 is a ready-to-drink complete food drink with very good taste.

Peak 123 Milk is enriched with 28 Vitamins & Minerals Extra fortified with Docosahexaenoic acid (DHA) Specially formulated for vital years maximum growth. Extra fortified with DHA. Support memory function. During pregnancy, women may be advised to take prenatal supplements containing 200mg to 300mg of DHA due to its benefits on brain development. Several studies have found positive associations between DHA supplementation during pregnancy and neurological development in infants.

Eye Health: One study, published in the American Journal of Clinical Nutrition, found babies of mothers who supplemented with DHA had better early visual acuity than those whose mothers did not supplement.

Brain Development: Another study published in the American Journal of Clinical Nutrition showed children of mothers who supplemented during pregnancy demonstrated better problem-solving abilities during the first year of their life than control subjects whose mothers did not supplement.

Full-Term Births: DHA supplementation during the later weeks of pregnancy is also linked to a decreased risk of early preterm labor.

In the study, published in the American Journal of Clinical Nutrition, 350 women were given either 600mg of DHA or a placebo daily during the last half of pregnancy. Women taking the DHA had a longer duration of pregnancy and babies with greater birth weights, lengths, and head circumference than those given a placebo.

In addition, the DHA pregnancies had lower rates of infants born at 34 weeks or earlier and shorter hospital stays for infants born preterm.

Autism and ADHD: Additional research published in the journal Critical Reviews in Food Science and Nutrition in 2019 shows that higher DHA levels at birth are associated with better childhood neurodevelopmental health, while lower DHA levels were linked to higher rates of autism spectrum disorders and attention-deficit/hyperactivity disorder.

In the first six months of life, DHA is especially important for the development of the nervous system. Breastfeeding mothers are encouraged to continue taking 200 mg to 300 mg of DHA a day, and most infant formulas also contain DHA. This amount must be balanced with the amount of arachidonic acid in the formula as too much DHA might limit the benefits derived from the arachidonic acid which is also essential for healthy development.

Low levels of DHA in early childhood are associated with lower literacy ability, while higher levels are linked to enhanced cognitive development and performance, memory and speed of performing mental tasks, according to a 2014 study published in the journal Nutrients.

Although study results are mixed, some have shown supplementing with DHA may help to ease the symptoms of ADHD. An article published in 2017 reviewed 16 studies looking at omega-3/6 supplementation and found in 13 studies that supplementation demonstrated favorable effects on ADHD symptoms. ALSO READ: Milo: Ingredients, Health Benefits, Side Effects

How to Spot A Fake Peak Milk

Best Milk For Babies In Nigeria