Is Amethyst Water Safe: Health Benefits and Side Effects 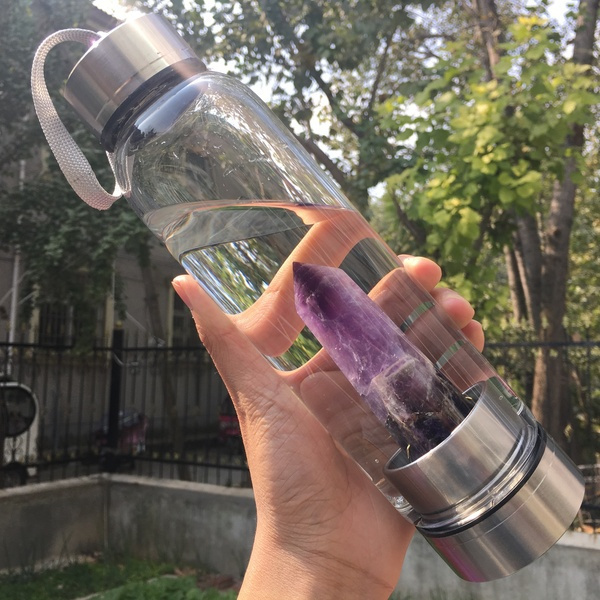 Amethyst is a violet variety of quartz, the ancient Greeks wore amethyst and carved drinking vessels from it in the belief that it would prevent intoxication. Amethyst is thought to be a powerful ayurvedic and natural health practitioners recommend using amethysts for healing, not much scientific research supports their use. High quality amethyst can be found in Siberia, Sri Lanka, Brazil, Uruguay, and the Far East. The ideal grade is called “Deep Siberian” and has a primary purple hue of around 75–80%, with 15–20% blue and (depending on the light source) red secondary hues. ‘Rose de France’ is defined by its markedly light shade of the purple, reminiscent of a lavender/lilac shade. These pale colors were once considered undesirable but have recently become popular due to intensive marketing.

Amethyst crystals are used in crystal therapy, which is meant to heal people suffering from certain health issues. It contains iron and certain other minerals and has been used as a treatment for a long time. Its name comes from the Greek term “Ametusthos” which means “not intoxicated”. In Greek mythology, a titan named Rhea gave the god of wine, Dionysus, an amethyst to help preserve his sanity. In fact, this myth led the ancient Romans to believe that amethysts could keep them from getting drunk.

What is Amethyst Water?

Amethyst water, also known as crystal infused water or crystal elixir is water that has been infused with amethyst, amethyst water bottles are now very common. Natural health practitioners believe that amethyst energy is directly absorbed into your body by drinking the magical liquid.

What are health benefits of amethyst ?

According to natural health practitioners, amethyst crystals produce small magnetic fields that have great effects on your body. Your body has magnetic fields as well, so the fields emitted by the amethyst can interact with yours and exchange energy.

Some health benefits that you can obtain if you own an amethyst or drink from a crystal water bottle are:

It helps with insomnia: Amethyst can get rid of those sleepless nights for you. Research conducted on animals and humans has shown that amethyst can regulate sleep patterns. Apparently, crystals emit some type of heat that can be calming for your body. So, it had good effects on your sleep cycle.

It’s a mood booster: Amethyst is said to boost your mood. Some studies in which subjects placed far infrared radiation-emitting discs under their pillows show that these persons were feeling much better.

It regenerates cells: Because of the radiations, amethyst is said to support healthy cell growth, as it increases your body’s energy levels.

It relieves stress and anxiety: If you suffer from anxiety, a gem water bottle can help you solve this problem. Amethyst crystals attract positive energy and can send negative emotions away.

It helps with decision making: Amethyst is said to work great on an emotional and psychological level. It helps you think more clearly and it builds your decision-making skills.

Amethyst owes its violet color to irradiation, impurities of iron and in some cases, other transition metals, and the presence of other trace elements, which result in complex crystal lattice substitutions. Impurities of iron have been linked significantly to cytotoxic, genotoxic and induced cellular oxidative stress.

The average lethal dose of iron is 200–250 mg/kg of body weight, but death has occurred following the ingestion of doses as low as 40 mg/kg of body weight. Autopsies have shown haemorrhagic necrosis and sloughing of areas of mucosa in the stomach with extension into the submucosa. Chronic iron overload results primarily from a genetic disorder (haemochromatosis) characterized by increased iron absorption and from diseases that require frequent transfusions.

There is scarcity of information on the safety of amethyst, we recommend that you discuss with your doctor before you use amethyst water or crystal elixir to treat any condition. Also Read: Is Jamaican Black Stone Safe