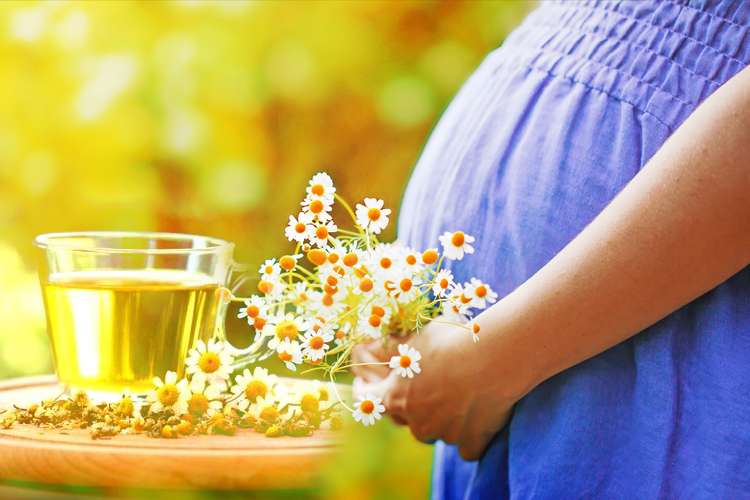 Chamomile tea is a popular tea made from the daisy-like flowers of the German chamomile plant. It has a fruity, apple flavor and has long been used for treating all kinds of ailments and especially as a calming respite after a busy day. (It’s even known for controlling damping-off disease in plants.) You can use fresh or dried flowers and you’ll need a teaspoon or two for every cup of tea.

Several recent studies have found links between women’s levels of day-to-day stress and lowered chances of pregnancy. For example, women whose saliva had high levels of alpha-amylase, an enzyme that marks stress, took 29% longer to get pregnant compared to those who had less. Chamomile tea is a gentle relaxant and acts as an effective natural sedative, thereby reducing stress.

Research studies show that around 1 in 4 men with type 2 diabetes have low testosterone levels (hypogonadism). Low testosterone levels can lead to problems that can reduce fertility such as low sperm count, erectile dysfunction, and decreased sex drive. Drinking chamomile tea may aid in lowering blood sugar levels. Its anti-inflammatory properties may prevent damage to the cells of your pancreas, which occurs when your blood sugar levels are chronically elevated. The health of your pancreas is extremely important, as it produces insulin, the hormone responsible for removing sugar from your blood. In one study of 64 diabetic people, those who consumed chamomile tea daily with meals for eight weeks had significantly lower average blood sugar levels than those who consumed water. Diabetes directly affects fertility in the human body. The scientific reason behind the same is that the oxidative stress caused due to high glucose level damages the DNA of the sperm. Thus, DNA gets damaged and fragmented.

To make chamomile tea, steep a chamomile tea bag in hot water for 5 to 10 minutes in a mug covered with a saucer. Then, drink the infusion when it has cooled to the point it is safe to drink.

Your tea is ready to sip. Drink one to four cups daily.

For a deliciously relaxing sleep-time tea, try lemon balm and chamomile, Lemon is chock-full of Vitamin C which is a powerful antioxidant for fertility, and is thought to prevent age-related decline in ovarian function. Vitamin C is also associated with a shorter time until pregnancy. The lemon peel has pectin which helps emulsify the fats you add-in and the lemon oils.  Lemon peel also has additional antioxidants which are crucial for developing healthy eggs (these particular ones are oligomeric proanthocyanidins or OPCs). Supposedly some of the substances in the lemon peel also help remove harmful forms of estrogen from your body (like those from chemicals). SEE: Health Benefits and Side Effects of Chamomile Tea

Health Benefits and Side Effects of Chamomile Tea

How to Use Guava Leaves For Fertility

How To Use Mango Leaves For Fertility
chamomile and fertility
December 28, 2020 Family & Community HealthPublic HealthComments Off on How to Use Chamomile Tea For Fertility