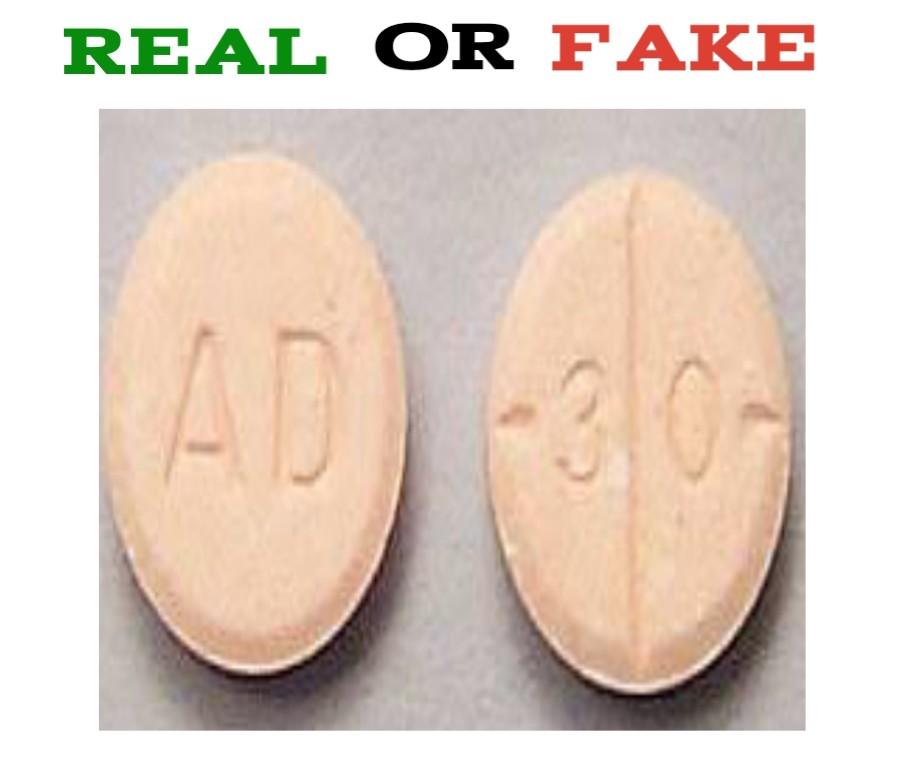 The real round orange pill with the imprint AD 30 has been identified as Adderall 30 mg  supplied by Shire US Inc. This combination medication is used to treat attention deficit hyperactivity disorder – ADHD. The medication alters certain naturally-occurring chemicals in your brain by enhancing the effects of neurotransmitters such as dopamine and norepinephrine. Amphetamine/dextroamphetamine belongs to a class of drugs known as stimulants. It can help increase your ability to pay attention, stay focused on an activity, and control behavior problems. It may also help you to organize your tasks and improve listening skills. This drug is also used to treat a certain sleeping disorder (narcolepsy) to help you stay awake during the day.

For ADHD, Adderall is designed to improve hyperactivity, impulsive behavior, and attention span. According to the Cleveland Clinic, stimulants like Adderall improve symptoms of ADHD in 70 to 80 percent of children, and in 70 percent of adults. The positive effects can be even greater when it’s used along with behavioral therapy. Adderall comes in either a tablet form or as a time-release capsule. It can interfere with sleep, so it should be taken in the morning. Your doctor will most likely start you off with a low dose to make sure you can tolerate it. Then, the dose can be slowly increased.

Genuine Adderall 30-mg tablets are round, orange/peach in color, and have “dp” embossed on one side and “30” on the other side. The tablets are packaged only in a 100-count bottle with the National Drug Code (NDC) 0555-0768-02, the agency said.

In contrast, the counterfeit tablets are round, white and do not have any type of letters or numbers, the FDA said. Fake tablets may also come in blister packages and have spelling mistakes on the packaging, such as:

Consumers who believe they have the counterfeit version of 30-mg Adderall tablets should not use them and should talk to their health care professional about their treatment options, the FDA said.

There have been at least two cases in which people received counterfeit versions of the 30-milligram dose of the drug with the wrong active ingredients — ones that treat acute pain, not attention problems. The fake pill is ineffective and may be harmful.

Adderall is currently in short supply because the manufacturers are having difficulty obtaining all of the active ingredients used in the drug. This is responsible for the spike in the street price of Adderall, Consumers need to be extra cautious when buying medicines online and remember that drugs in short supply are often targets for counterfeiting, the FDA said.

A consumer, may not have access to most of the test equipment used by regulatory bodies to verify the identity of a drug product but there are simple guidelines that can help identify a fake AD 30 pill;

Check the AD 30 Pill Packaging: This is the simplest and the easiest method to check the authenticity of   AD 30 pill. Check the packaging for details like unusual fonts, print color, and missing logo. Analyze whether it appears the same or different from the one you have used before.

No Breakage in the Seal: An AD 30 pill packet that comes with a security seal should not be damaged. Look for a crack or breaks in the sealing tape.

Check the AD 30 Pill Dosage Form: Look for dissimilarities in physical appearance of the drug like its color, size, uniformity, consistency, shape, etc.

Allergies / Unexpected Side Effects from using AD 30 Pill: Most of the medicines including  AD 30 Pill have side effects. It is important to consult your doctor before the usage to keep a check on allergies arising from it. If you notice certain unexpected or harmful side effects from your medication, report to your doctor immediately.

Price of AD 30 Pill: If the price of  an AD 30 PILL is suddenly far cheaper than the usual rate, double check the product as there may be a chance that the fake companies wanted to lure customers by providing medicines at much cheaper rates.

Verify Online or SMS: Many countries have unique methods for the verification of the genuineness of pills using authentication code or other online portals to confirm the authenticity of the AD 30 pill being purchased.

Adderall side effects range from common, mild issues such as loss of appetite, nausea and insomnia to more serious but rare issues such as seizures, heart attack and psychiatric disorders. The drug has a black box warning for a high potential for abuse, and Adderall misuse may lead to cardiovascular events and sudden death. SEE: Alternatives to Over-The-Counter Stimulants Similar to Adderall

How To Spot Blue M 30 Pill Fake Vs Real
ad 30 pill fake
February 5, 2021 Family & Community HealthPublic HealthComments Off on How to Spot AD 30 Pill Orange Round Fake Vs Real