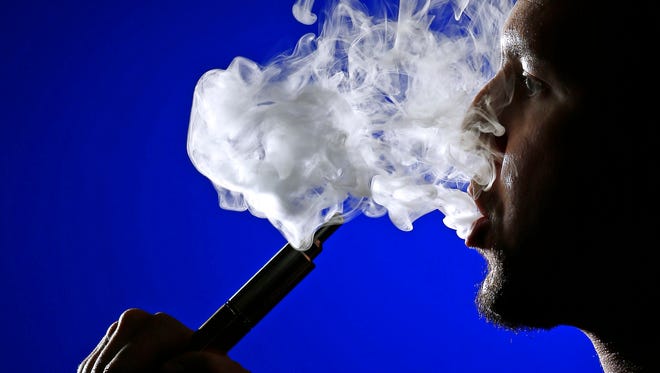 E-cigarettes are the most common form of electronic nicotine delivery systems (ENDS) and electronic non-nicotine delivery systems (ENNDS) but there are others, such as e-cigars, e-pipes, e-shishas, etc.  ENDS heat a liquid to create an aerosol that typically contains nicotine, which is inhaled by the user. The aerosols also contain other toxic substances, such as formaldehyde which is a cancer-causing substance. These toxic substances are harmful to both users and those exposed to the aerosols secondhand.

Are e-cigarettes harmful to health?

E-cigarette use is associated with increased risk of cardiovascular diseases, lung disorders and other adverse effects. ENDS are often used as complements to cigarette smoking and not as substitutes, especially in smoke-free environments. In the USA, almost 70% of adult ENDS users also currently smoke cigarettes, while the percentage of dual users among young people is lower, at 33%. Thus, dual use of ENDS and cigarettes sustains nicotine dependence.

In combination with tobacco smoking, which is the practice among the majority of e-cigarette users, the health impacts are compounded subjecting the user to increased risk of a variety of diseases.

E-cigarettes are particularly dangerous when used by children and adolescents. Nicotine is highly addictive and can have long-lasting, damaging effects on brain development. Furthermore, there is a growing body of evidence in some settings that never-smoker minors who use e-cigarettes at least double their chance of starting to smoke conventional tobacco cigarettes later in life.

The scientific evidence on e-cigarettes as cessation aids is inconclusive and still a subject of debate. There is also a lack of clarity as to whether these products have any role to play in tobacco cessation at the population level. There is some evidence that smokers can be successful in switching to e-cigarettes but very few are able to stop using these products. Switching from conventional tobacco products to e-cigarettes is not quitting as it still exposes the user to the nicotine and the other toxic compounds in the aerosols of e-cigarettes.

What support is available to help you quit e-cigarettes?

Many e-cigarettes users wanting to quit are already using existing tools such as toll-free quit lines, text message programmes and specialized tobacco dependence treatments to quit. Data from the largest quit line operator in the US (serving 23 States and over 700 employers and health plans) showed that among their 74,646 quit line participants enrolled January 2017-June 2020, 14% of them were using e-cigarettes, 2% of them were exclusive e-cigarette users.

How effective are quit line services for quitting e-cigarettes?

Future research could look at the impact of different interventions including nicotine replacement therapy (NRT).

How effective are text message programmes for quitting e-cigarettes?

Text-message based vaping cessation programmes are effective in promoting abstinence among young adult e-cigarette users. A randomized control trial conducted by the Truth Initiative in the U.S. compared 7-month quit rates (percentage of young adults who self-reported free of e-cigarettes in the last 30 days) between 1,304 participants who received the text message support and 1,284 participants who were assessment-only controls during the same period. The results showed that quit rates were 24.1% among intervention participants and 18.6% among control participants, which are statistically significantly different.

There are many resources within your own community. Check out the WHO Quitting Toolkit to learn about support available through healthcare providers, quit line counsellors, text message-based programmes, mobile applications and WHO’s first digital health worker, Florence.

If you want to quit e-cigarette use, seek help from your healthcare provider. You can also start by following these four preparatory steps: –

What Are The Benefits of Quitting Smoking Sexually?