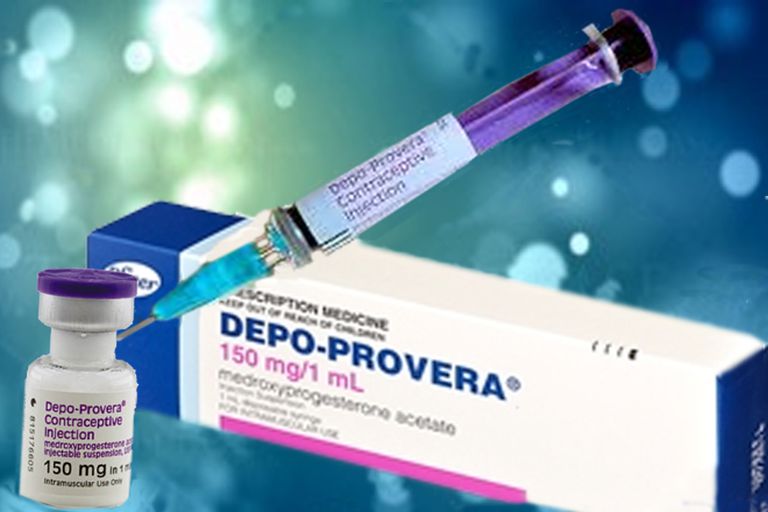 Depo-Provera is a well-known brand name for medroxyprogesterone acetate, a contraceptive injection that contains the hormone progestin. Depo-Provera is given as an injection every three months. Depo-Provera typically suppresses ovulation, keeping your ovaries from releasing an egg. It also thickens cervical mucus to keep sperm from reaching the egg.

Depo-Provera works for about 3 months at a time. To prevent pregnancy, you have to get 1 shot from your doctor 4 times a year, about 12 to 14 weeks apart. If you get it in the first 7 days of your cycle, it works right away. If you don’t, you’ll need to use another form of birth control for 1 week. Your doctor will confirm you are not pregnant before giving you the injection.

Most women who use Depo-Provera have changes in their menstrual periods. These may include:

About half of women who use Depo-Provera stop having periods after 1 year. This is not harmful. Menstrual bleeding usually returns to normal when you stop using Depo-Provera. It may take about 9 to 10 months to get pregnant after your last shot.

How to flush Depo-Provera out of your system

Depo-Provera remains in your system for a longer span of time than all other forms of hormonal birth control. The injection form keeps you protected from pregnancy for three months, One study says that, after quitting Depo-Provera, ovulation can be delayed for up to 18 months, while another suggests up to 22 months. So it remains in your system for at least that long though it can impact ovulation for as many as 18-22 months.

Learning how to flush Depo-Provera out of your system can be beneficial if you want to eliminate side effects and if you’re preparing for pregnancy, looking to rebalance your hormones, find PMS relief, or finding hormonal harmony.  Although there are several detox products in the market today, you should discuss with your doctor before trying any.

The good news is that many women are finding innovative ways of flushing Depo-Provera and other birth pills out of their systems, some of their methods include:

Drinking adequate amount of water daily: Drink lots of water and avoid sugary drinks like soda and fruit juice or caffeinated drinks like coffee. An inbuilt advantage of rehydrating your body is that water is a natural detox agent. Flushing out your system, the chemical and toxins along with fat and other unwanted drug residue leaves your body. The more water you drink, the more powerful the flushing effect. Keep a small bottle of water with you at all times and regularly take small sips. This approach is better than trying to periodically down large glasses

Avoiding alcohol: Eliminate alcohol for at least 30 days to help heal your gut, and give your liver a break from processing toxins.

Good Nutrition: Aim for 5 to 9 servings of fruits and vegetables every day. There are tons of different types of fruit out there. Not big on apples? Try mangos. Hate celery? A spinach salad with strawberries, chopped walnuts, and a light vinaigrette is easy to make and delicious.

Protein: protein is a building block for a healthy body. You don’t need much medical experts suggest 46 grams of protein for women and 56 grams for men each day. Protein isn’t just in meat; beans and yogurt are also good sources of protein.

Multivitamins: a multivitamin can be extremely beneficial to kick-start your detox. Many people benefit from a multivitamin that at least contains zinc, vitamin A, vitamin C and B-complex. However, be sure to talk to your doctor before adding vitamins to your diet. Every person’s body is different and you may need more of one nutrient than another. Also, certain vitamins can be harmful depending on what else you’ve been taking. Also Read: How To Stop Spotting On Nexplanon

How To Flush Out Period Blood
How to flush Depo-Provera out of your system
June 1, 2022 Women's HealthPublic HealthComments Off on How To Flush Depo Provera Out Of Your System