HIV Treatment in Nigeria: Everything You Should Know 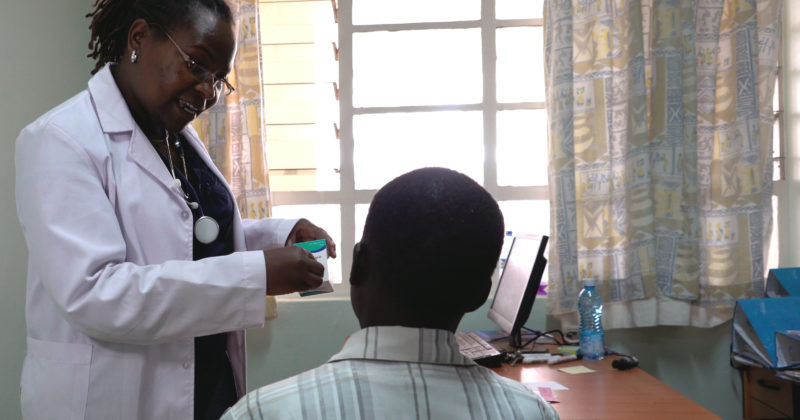 Since 2006, the Nigerian government has provided free antiretroviral treatment at designated facilities in the country, which has an estimated 3.1 million people living with HIV/AIDS. But this has not been enough to eliminate the high and sometimes inequitable economic burden of HIV/AIDS on households. Nigeria has the second-largest HIV epidemic in the world and one of the highest rates of new infection in sub-Saharan Africa. The country continues to fall short of providing the recommended number of HIV testing and counseling sites compounded by low levels of access to antiretroviral treatment . The state with the highest prevalence of HIV/AIDS is now Akwa Ibom. A new survey showed that Northern Nigeria has a lower HIV/AIDS burden than the south. It states that while the North-West has the lowest prevalence rate at 0.6 percent, the South-South geopolitical zone has the highest with 3.1 percent.

In 2017, the Nigerian Government announced that Dolutegravir (DTG), the new drug for the treatment of HIV/AIDS, is already being used in Nigeria, although only by those who can afford it because of its high cost. DTG, first approved in the U.S. in 2013, is now being given to 20,000 patients in Kenya and was rolled out in Nigeria and Uganda, and others later in the same year. DTG can improve and prolong the lives of people who suffer side effects and resistance to other treatments and is the drug of choice for people with HIV in high-income countries who have never taken antiretroviral therapy before and for those who have developed resistance to other treatments. According to The National Agency for the Control of AIDS(NACA),  the Standard Antiretroviral Therapy (ART) consists of the combination of at least three antiretroviral (ARV) drugs to maximally subdue the HIV virus and stop the progression of HIV disease. Huge reductions have been seen in rates of death and suffering when use is made of a potent ARV regimen, particularly in the early stages of the disease. SEE: States With Highest HIV Rate In Nigeria 2020/2021

There are more than 30 antiretroviral medications in six drug classes, each class of drug attacks HIV in a different way. Generally, drugs from two (or sometimes three) classes are combined to ensure a powerful attack on HIV.

Nucleoside/nucleotide reverse transcriptase inhibitors (NRTIs):  This type of HIV drug acts by blocking an enzyme HIV needs to make copies of itself. Normally, HIV enters certain cells in the body that are part of the immune system. These cells are called CD4 cells, or T cells. After HIV enters the CD4 cells, the virus begins to copy itself. To do so, it needs to copy its RNA, the virus’s genetic makeup into DNA. This process is called reverse transcription and requires an enzyme called reverse transcriptase. NRTIs prevent the virus’s reverse transcriptase from accurately copying its RNA into DNA. Without DNA, HIV can not make copies of itself. This class of medications is sometimes referred to as the ‘backbone’ of a first-line HIV treatment combination in Nigeria. It includes the following drugs: Abacavir may be marketed under the name Ziagen, Emtricitabine is also known as Emtriva, Lamivudine Tenofovir disoproxil, Tenofovir alafenamide, and Zidovudine.

Protease inhibitors (PIs) are a class of antiviral drugs that are widely used to treat HIV/AIDS and hepatitis C. Protease inhibitors prevent viral replication by selectively binding to viral proteases (e.g. HIV-1 protease) and blocking proteolytic cleavage of protein precursors that are necessary for the production of cells. While HIV can still replicate in the presence of protease inhibitors, the resulting virions are immature and unable to infect new cells. Examples of this drug include Atazanavir, Darunavir, and Lopinavir which are only available in the combination tablet Kaletra. See HIV dating sites in Nigeria

Booster drugs are used to ‘boost’ the effects of protease inhibitors and some other antiretrovirals. Adding a small dose of a booster drug to an antiretroviral makes the liver break down the primary drug more slowly, which means that it stays in the body for longer times or at higher levels. Without the boosting agent, the prescribed dose of the primary drug would be ineffective. They include Ritonavir also known as Norvir and  Cobicistat.

How much is ARV treatment in Nigeria?

It is estimated that the first‐line regimen of antiretroviral treatment for adults and children costs about US$368 per person per year (about 1US$ per day). Adding 15%, which is the cost of logistics to the cost of drugs, translates approximately to US$393.75 (₦63 000) treatment cost per person per year. Available data suggest that a year of optimal HIV treatment costs $18,300 or more while 48 weeks of treatment for HIV and hepatitis C together will cost $29,000 or more. HIV drugs are supplied free to patients who register, and free HIV/AIDS treatment centers are located in all states in Nigeria. Those who do not register purchase these drugs from registered pharmacy shops and private hospitals in the country.

The Nigerian national guidelines for HIV Treatment maintain the core principles of HTS service provision, including human rights and ethical considerations. The guidelines enable service providers through strategic communication, specific targeting of eligible populations, integration of HTS with key services, and coordination of services at the national, district, and service delivery levels. The guidelines place emphasis on the need to provide accurate HIV test results with a focus on circumstances for repeat HIV testing and HIV retesting. DOWNLOAD: National Guidelines For HIV Treatment In Nigeria

Issues and Problems Related to HIV Treatment in Nigeria

Resistance to some treatment regimes: The results of studies conducted by scientists in six tertiary health institutions in the country have revealed that more HIV patients are developing resistance to some treatment regimes. “For instance, when HIV-infected babies were given nevirapine, a third of them developed resistance. That means if you want to treat those babies, you would have to give them more expensive drugs or one that is not readily available.

The HIV/AIDS (Anti Discrimination) Act of 2014, makes provisions for the prevention of HIV/AIDS-based discrimination and to protect the fundamental human rights and dignity of people living with and affected by HIV/AIDS. However, poverty, stigma, discrimination, and a poorly coordinated health system continue to be major barriers to HIV treatment and prevention efforts in Nigeria. People living with HIV still experience stigma, hostility, denial of gainful employment, forced resignation or retirement, delivery of poor quality treatment, and segregation in hospital wards. This has complicated efforts to get others to register and gain access to HIV treatment in Nigeria for treatment.

Corruption is one of the greatest threats to HIV treatment and prevention in Nigeria, the Network of People Living with HIV/AIDS in Nigeria (NEPWHAN) has called on governments to ensure Antiretroviral Therapy (ART) is completely free, accessible, and without a user fee. However, despite these calls, the monthly fee to access the drugs continues unabated in several states. Those charged with the responsibility for coordinating the treatment program continue to embezzle donor funds forcing foreign donors to cut funding putting millions of lives at risk. See Free HIV Treatment Centers In Nigeria

How Much Does HIV Test Cost In Nigeria?
hiv treatment in nigeria
August 17, 2019 Family & Community HealthPHNLeave a comment