Don’t Drink and Drive: Here is Why ! 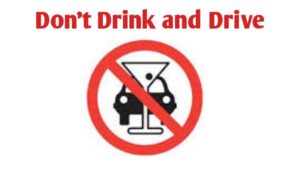 Drinking and driving is sometimes called driving under the influence (DUI) or driving while intoxicated (DWI), and involves operating a vehicle with a blood alcohol content (BAC) level of at least 0.08 percent. However, even a small amount of alcohol can lead to harmful situations. Some drivers may not even show warning signs of being under the influence, but that doesn’t mean it’s any less dangerous.

A blood alcohol content (BAC) level of 0.08 percent is considered legally impaired. However, alcohol can start to affect many of your senses after only one drink. No matter the circumstances, you should never drink and drive. It’s not worth the risk of putting yourself and others in danger. According to the World health organization , Drink–driving increases the chance of a road traffic crash, as well as the likelihood that death or serious injury will result. The risk of impairment starts at very low levels of alcohol consumption and rises exponentially with alcohol intake. Drivers with a BAC of between 0.02 g/dl and 0.05 g/dl have at least a three times greater risk of dying in a vehicle crash. Only 34 countries, representing 2.1 billion people, have national drink–driving laws in line with best practice, i.e., BAC limit of less than or equal to 0.05 g/dl as well as lower limits of less than or equal to 0.02 g/dl for young and novice drivers.

10 Reasons You Should Not Drink and Drive

You Could End Up in Jail

No one likes to think about the prospect of going to jail, and for many people, being confined to a jail cell is a concept they can hardly imagine. But if you are caught drinking and driving, going to jail is exactly what might happen to you. And, if you cause any harm while drinking or driving – hit another person or cause property damage with your car, for example – jail time could very likely be longer than a night or two. In fact, if you cause a fatality you could spend many years in prison.

Your Insurance Premiums Could Increase

You May Lose Your Job and Professional License

In many professions, a conviction of drinking while driving is a serious enough crime to result in employment termination or revocation of a professional license. This is even more likely if your position is one of esteem or prestige, or if you are employed by a municipal or state government. Doctors, nurses, lawyers, teachers, public figures, police officers and others may all be at risk of losing their job or license if they are caught drinking and driving.

You Could Incur Large Fines and Fees

One reason not to drink and drive is that getting a DUI is not cheap. Not only will you have to pay for the cost of the ticket, but you may also incur court fees and fines, civil penalties (if you cause injury or property damage to another party), and be forced to pay fees for reinstating your license.

Drinking While Driving Increases Your Risk of Being in an Accident

Perhaps the biggest reason to not drink and drive is that doing so significantly increases your risk of being in an accident, and therefore your risk of causing injury to yourself or to another person. According to Mothers Against Drunk Driving (MADD) 27 people die per day in America as a result of drunk driving crashes.

You Do Not Want a Criminal Record

If you are found to be guilty of drinking and driving, this information will be displayed on your criminal record, and could be viewed by future employers and others who require a criminal background check. Fighting criminal charges can be costly and your future opportunities may be severely limited if you are convicted.

You May Cause Serious Property Damage

Even if you do not cause physical injury to yourself or to another person, you may hit another object, resulting in thousands of dollars’ worth of property damage. Totaling your vehicle, hitting a stationary object, or causing damage to another person’s property simply is not worth the risk.

You Could Injure a Child

MADD also reports that drunk driving kills hundreds of children every year. In a single recent year, there were a total of 1,149 children ages 14 and younger who were killed in motor vehicle traffic crashes. Of those, 17 percent of fatal traffic accidents – or 200 fatalities – involved an alcohol-impaired driver. What’s more, another 29 children who were either pedestrians or riding a bike were struck by a driver with a blood alcohol concentration level of 0.08 or greater.

You Set a Bad Example for Others, Including Your Family

You Could Die and Leave Your Loved Ones to Suffer

Driving under the influence of alcohol is responsible for a significant number of deaths on our roads.  Excessive alcohol use is responsible for more than 95,000 deaths in the United States each year, or 261 deaths per day. These deaths shorten the lives of those who die by an average of almost 29 years, for a total of 2.8 million years of potential life lost. When you think about it, driving is really complicated. You need total concentration, good coordination, rapid reflexes and to be able to make correct judgments and decisions. So it isn’t surprising that drinking alcohol diminishes that. There’s no such thing as safe drink driving. SEE: Alcoholic Dementia

Health Benefits of Zobo Drink Without Sugar
Don't Drink and Drive
October 15, 2020 Family & Community HealthPublic HealthComments Off on Don’t Drink and Drive: Here is Why !