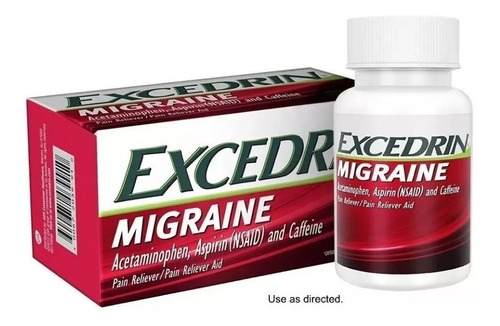 How fast Excedrin migraine works depends on a number of factors including body mass, age, genetics and metabolic rate. Acetaminophen is rapidly absorbed from the GI tract with peak plasma levels usually occurring at 2 hours and almost always by 4 hours. Acetaminophen for most people, has a half-life in the blood of 1.25 to 3 hours.

It is reported that the aspirin concentration in blood reaches its peak approximately 20 min after oral administration in healthy volunteers, but the absorption and bioavailability of aspirin in AMI may be quite different. The effects of caffeine the last ingredient can be felt as soon as 15 minutes after it is consumed. The level of caffeine in your blood peaks about one hour later and stays at this level for several hours for most people. Six hours after caffeine is consumed, half of it is still in your body. Evidence suggests that the use of combination analgesics such as Excedrin offers advantages in the treatment of headaches by targeting pain in more than one way.

Migraine is a complex disorder characterized by recurrent episodes of headache, most often unilateral and in some cases associated with visual or sensory symptoms—collectively known as an aura—that arise most often before the head pain but that may occur during or afterward. Migraine is most common in women and has a strong genetic component.

Migraine is an extraordinarily prevalent neurological disease, affecting 39 million men, women and children in the U.S. and 1 billion worldwide.

Everyone either knows someone who suffers from migraine, or struggles with migraine themselves. According to the Migraine Research Foundation, migraine is the 3rd most prevalent illness in the world, nearly 1 in 4 U.S. households includes someone with migraine.

Amazingly, 12% of the population – including children – suffers from migraine, 18% of American women, 6% of men, and 10% of children experience migraines. Migraine tends to run in families. About 90% of migraine sufferers have a family history of migraine.

Typical symptoms of migraine include the following:

Features of migraine aura are as follows:

Yes, the acetaminophen, aspirin, and caffeine combination in Excedrin Migraine works well to treat pain caused by tension headaches and migraine headaches. Research has shown that aspirin one of its ingredients can be an effective and safe treatment option for acute migraine headaches, with further research showing its potential efficacy in preventing recurrent migraine headaches through lower doses of 81 to 325 mg, according to findings of a review published in The American Journal of Medicine.

In addition, studies indicate that caffeine-containing analgesics like Excedrin Migraine are safe and effective in treating migraine attacks, but their consumption should be limited to two days during the week to avoid medication overuse headache.

How should I take Excedrin Migraine?

Take Excedrin Migraine exactly as directed on the label, or as it has been prescribed by your doctor. Do not take more of Excedrin Migraine than is recommended. An overdose of acetaminophen can damage your liver or cause death.

Take the medicine with food or milk if it makes your stomach upset.

Excedrin Migraine can cause unusual results with certain lab tests for glucose (sugar) in the urine. Tell any doctor who treats you that you are using Excedrin Migraine.

If you need surgery, tell the surgeon ahead of time that you are using Excedrin Migraine. You may need to stop using the medicine for a short time.

Store Excedrin Migraine at room temperature away from moisture and heat.

Since Excedrin Migraine is used when needed, you may not be on a dosing schedule. If you are on a schedule, use the missed dose as soon as you remember. Skip the missed dose if it is almost time for your next scheduled dose. Do not use extra medicine to make up the missed dose.

Seek emergency medical attention or call the Poison Help line at 1-800-222-1222. An overdose of acetaminophen can damage your liver or cause death.

The first signs of an acetaminophen overdose include loss of appetite, nausea, vomiting, stomach pain, sweating, and confusion or weakness. Later symptoms may include pain in your upper stomach, dark urine, and yellowing of your skin or the whites of your eyes. READ: How To Flush Excedrin Out Of System

How Does Botox Help Migraines?