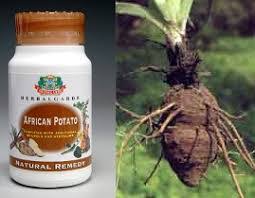 African wild potato is a medicinal plant in the Hypoxidaceae family. The plant has no relationship with the potatoes you’re probably most familiar with. It’s actually part of the lily family.  The plant is native to southern Africa from South Africa as far north as Mozambique + Zimbabwe. This plant is the best known member of this genus. Its most common name is the African wild potato. It is a hardy very attractive drought and frost tolerant deciduous geophyte that is extremely easy to grow which is an asset to any landscape or garden. It grows well in most soil types in full sun to partial shade where it flowers freely throughout summer. 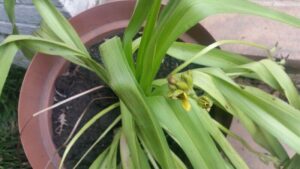 Cancer is a broad term. It describes the disease that results when cellular changes cause the uncontrolled growth and division of cells. Some types of cancer cause rapid cell growth, while others cause cells to grow and divide at a slower rate.Certain forms of cancer result in visible growths called tumors, while others, such as leukemia, do not.Most of the body’s cells have specific functions and fixed lifespans. While it may sound like a bad thing, cell death is part of a natural and beneficial phenomenon called apoptosis.

A cell receives instructions to die so that the body can replace it with a newer cell that functions better. Cancerous cells lack the components that instruct them to stop dividing and to die. As a result, they build up in the body, using oxygen and nutrients that would usually nourish other cells. Cancerous cells can form tumors, impair the immune system and cause other changes that prevent the body from functioning regularly. Cancerous cells may appear in one area, then spread via the lymph nodes. These are clusters of immune cells located throughout the body.

The African wild potato contains several active ingredients that are of interest, including hypoxoside and phytochemicals. The compound hypoxoside contains rooperol, which is an antixiodant. According to a study published in the Journal Of Ethnopharmacology Rooperol was shown to have similar or greater antioxidant potential than ascorbic acid. Antioxidants help protect the body against free radicals that can damage cells and cause many diseases. These diseases include cancer, heart failure, and Alzheimer’s disease.

Phytochemicals are substances that occur naturally in plants. They act as antioxidants in the body. Sterols and sterolins are phytochemicals in the African wild potato. Sterols and sterolins boost the immune system, and may even help reduce cholesterol. African wild potato is used for urinary tract infections (UTIs), enlarged prostate (benign prostatic hyperplasia or BPH), prostate cancer, and many other conditions, but there is no good scientific evidence to support these uses.

Although the African wild potato contains chemicals that might decrease inflammation. the American Institute for Cancer Research states that no single food or plant  can protect you against cancer by itself. But research shows that a diet filled with a variety of vegetables, fruits, whole grains, beans and other plant foods helps lower risk for many cancers. In laboratory studies, many individual minerals, vitamins and phytochemicals demonstrate anti-cancer effects. SEE: Can Carrot Juice Kill Cancer Cells

How Long Does It Take For Cervical Cancer to Develop?