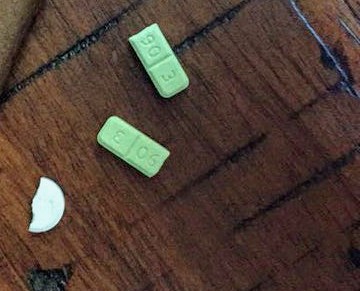 The green, rectangular pill with imprint S 90 3 has been identified as alprazolam 2 mg (Xanax) supplied by Dava Pharmaceuticals. Alprazolam belongs to a class of medications called benzodiazepines which act on the brain and nerves (central nervous system) to produce a calming effect. It is used to treat anxiety and panic disorders and works by enhancing the effects of a certain natural chemical in the body known as Gamma-Aminobutyric acid  (GABA) or γ-aminobutyric acid. GABA is the chief inhibitory neurotransmitter in the developmentally mature mammalian central nervous system. Its principal role is reducing neuronal excitability throughout the nervous system.

In comparison with other benzodiazepines, the body absorbs Xanax quickly, so its effects come on rapidly. Within about 1–2 hours, the concentration of Xanax in the blood reaches its peak. The effects of the drug usually appear within 1 hour, with one small scale study finding an average onset time of 49 minutes with oral administration. Xanax also leaves the body quickly. Its half-life is 11.2 hours in healthy adults, meaning that the body removes about half of the Xanax that it has absorbed in just over 11 hours.

Tolerance to Alprazolam develops quickly, requiring the user to take more of the drug to achieve the desired effects. Someone with an Alprazolam addiction may take up to 20 to 30 pills per day. If the user decides to stop taking Xanax, they may experience withdrawal effects, such as anxiety, restlessness, insomnia, and tremors. The onset of withdrawal symptoms is a sign that a physical dependence has developed. The development of tolerance and withdrawal are indications of addiction. Once an Alprazolam addiction has taken hold, daily responsibilities, such as school, work or family, are ignored as energy is redirected towards drug seeking behavior.

The Menace of Fake Xanax

In their latest report on fake online pharmacies that ply their trade in the United States, the National Association of Boards of Pharmacy (NABP) found more than 1,500 new websites that it considers “Not Recommended,” and of these, 31% are offering illicit prescription drugs, such as codeine, fentanyl, oxycodone, Adderall, Valium, and Xanax. Falsified medicines are often the business of criminal cartels. Fentanyl laced pills are responsible for most overdose deaths involving drugs that triggers highs. Fentanyl is a powerful synthetic opioid that is similar to morphine but is 50 to 100 times more potent.

Many drug dealers mix the cheaper fentanyl with other drugs like Xanax to increase their profits, making it often difficult to know which drug is causing the overdose. Naloxone is a medicine that can treat a fentanyl overdose when given right away. It works by rapidly binding to opioid receptors and blocking the effects of opioid drugs. But fentanyl is stronger than other opioid drugs like morphine and might require multiple doses of naloxone.

In many instances, patients have noticed a different taste, consistency, or appearance of medicines that are later identified as being counterfeit, or they may have a different reaction to the counterfeit drug. A genuine green Xanax bar should have the standard Alprazolam taste which is slightly bitter but literally messes up your taste buds.

However, anecdotal evidence suggests that you should NOT depend on the taste of this medication for genuiness. That will tell you nothing that’s definitively helpful in identifying it. The reason for this is that the taste buds on your tongue that detect bitter tastes, even though they are distributed across your entire tongue from front to back, can easily fool you.

Here’s how that happens.

Picture yourself popping a Xanax tablet into your mouth with a glass of water ready to wash it down. If you toss the tablet all the way to back of your mouth and chase it with a sip of water, there’s at least a 50/50 chance or greater that you won’t taste anything at all.

It’s for this reason that the taste test is one of the easiest tests to fail when it comes to Xanax consumption. And lots of medications taste bitter, and “bitter” covers a lot of territory.

The absolute best way to tell is as follows:

First, check the color of the tablet. If it’s not white, pink, or purple, you’re not holding a Xanax tablet in your hand. (Again, this applies to the USA).

Then, look to see if it’s scored. There should be a single line across the tablet, making it relatively easy to cut it in half with a pill splitter. The shape is another characteristic.

The ultimate proof of whether or not you have a genuine tablet of Xanax is to see what happens approximately 30–45 minutes after you swallow it.

If you start to feel very relaxed and even sleepy, and all the tension and stress in your body is released, that, at the very least — combined with everything else I’ve stated — will provide the likelihood that you’ve just taken Xanax and not a pressed tablet of baking soda, or worse.

This is one of the reasons why Xanax is a controlled substance in the USA and elsewhere. If you have a prescription from a doctor and you get it filled at a licensed pharmacy, you won’t need any of the information I’ve just provided.

If your Xanax tastes differently from previous ones you have used or if you develop unusual side effects such as allergic reactions, the drug may be counterfeit. If you have these concerns, discontinue the drug and report to your healthcare provider and contact your local drug control agency.

Drugs are designed to help us fight off illnesses and diseases but with counterfeits infiltrating the market, it may be difficult for people to get rid of these diseases. With the recommendations in this article, you not only increase your chances of buying standard, high-quality drugs, but you also reduce or even eliminate your chances of using counterfeit S 90 3 pill. This keeps you safe and healthy at all times. SEE: How To Spot B706 Fake Pill