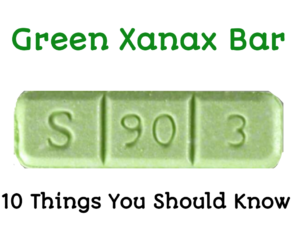 The green, rectangular pill with imprint S 90 3 has been identified as alprazolam 2 mg (Xanax) supplied by Dava Pharmaceuticals. Alprazolam belongs to a class of medications called benzodiazepines which act on the brain and nerves (central nervous system) to produce a calming effect. It is used to treat anxiety and panic disorders and works by enhancing the effects of a certain natural chemical in the body known as Gamma-Aminobutyric acid  (GABA) or γ-aminobutyric acid. GABA is the chief inhibitory neurotransmitter in the developmentally mature mammalian central nervous system. Its principal role is reducing neuronal excitability throughout the nervous system. (GABA).

Read the Medication Guide provided by your pharmacist before you start taking S 90 3 and each time you get a refill. If you have any questions, ask your doctor or pharmacist.

Take this medication by mouth as directed by your doctor. Dosage is based on your medical condition, age, and response to treatment. Your dose may be gradually increased until the drug starts working well. Follow your doctor’s instructions closely to reduce the risk of s 90 3 side effects. Read Fake Xanax Side Effects

The FDA warns that there are serious risks associated with using green Xanax pills, Liquid Xanax or other benzodiazepines at the same time as opioid analgesics, like oxycodone and hydrocodone, among others, or with opioid-containing cough products.  In addition, this medication may cause withdrawal reactions, especially if it has been used regularly for a long time or in high doses. In such cases, withdrawal symptoms (such as seizures) may occur if you suddenly stop using this medication. To prevent withdrawal reactions, your doctor may reduce your dose gradually. Report any withdrawal reactions right away.

Though it helps many people, this medication may sometimes cause addiction. This risk may be higher if you have a substance use disorder (such as overuse of or addiction to drugs/alcohol). Take this medication exactly as prescribed to lower the risk of addiction. Ask your doctor or pharmacist for more details.

There are common side effects you can expect when using S 90 3 pill. These can include:

Serious but less common Side effects

Get medical help right away if these rare but very serious side effect such as yellowing of eyes or skin or seizures occur.

For all users of S 90 3 green Xanax bar: To ensure safe and effective use of benzodiazepines, all patients prescribed with Alprazolam will be provided with the following guidance:

Inform your doctor about any alcohol consumption and medicine you are currently taking, including over-the-counter (OTC) medication. Alcohol should generally not be used with S 90 3 or during treatment with benzodiazepines.

Alprazolam is not recommended for use in pregnancy. Inform your doctor if you are pregnant, if you are planning to have a child, or if you become pregnant while you are taking this medication. A child born of a mother who is taking benzodiazepines may be at risk of withdrawal symptoms from the drug. Also, respiratory problems have been reported in children born to mothers who have been taking benzodiazepines. Also inform your doctor if you are breast-feeding. It is thought that Xanax is excreted in human milk. As a general rule, mothers who must use Xanax should not breast-feed.

Until you experience how S 90 3 green Xanax affects you, do not drive a car or operate heavy or dangerous machinery.

Do not increase the dose of medication without speaking with a doctor, even if you think the medication “does not work anymore”. Benzodiazepines, even when used as recommended, may produce emotional and physical dependence. Do not stop taking this drug abruptly or decrease the dose without consulting your doctor because withdrawal symptoms can occur.

Inform your doctor if you have asthma or other breathing problems, glaucoma, kidney, or liver diseases, history of alcoholism or depression, suicidal thoughts, or an addiction to drugs or alcohol. SEE R 027  Xanax Pill?

How Long Does S 90 3 green Xanax Stay in Your System?

Even though the half-life of green Xanax bars s 90 3 is about 11 hours, the medication is no longer effective in the body after four hours. This is why it may have to be taken several times a day, depending on the prescription and severity of symptoms. It’s also why the drug isn’t typically recommended for chronic anxiety. Since Xanax has a half-life of around 11 hours, most users will have the drug out of their systems after 4 days.

S 90 3 is detectable in your blood, urine, saliva, and hair, but how long its detectable depends on a variety of individual factors. A urine drug screen, such as those that are done for employment, will test positive for benzodiazepines like S 90 3   for five days and up to a week after a dose.

Xanax is not considered a long-lasting drug, as the effects last about four hours. S 90 3 Xanax, like all benzodiazepines, works by enhancing the activity of gamma-amino butyric acid (GABA) in the brain. GABA, a neurotransmitter, slows the nerve impulses throughout the body, causing sedation and anti-anxiety effects. Specifically, S 90 3 green Xanax bars are meant to cause calmness and relaxation in order to alleviate the symptoms of GAD, panic disorder, and agoraphobia. It works quickly, often producing the desired effects within minutes, and it begins to alleviate symptoms of GAD and Panic Disorder (with or without agoraphobia) within hours or days of the first dose. Read: U03 Pill: Everything You Should Know

Green Xanax is especially addictive when misused (taken recreationally or other than as directed). Anyone can become addicted to Xanax. According to the U.S. National Library of Medicine, S 90 3 use can result in tolerance, addiction, and dependence if taken in large quantities or used for a prolonged period. Even people who take the medication exactly as prescribed can become addicted to it without realizing it. The following are some of the most common psychological effects associated with Xanax:

Anxiety: The lack of Xanax during withdrawal causes the opposite of a benzodiazepine-calm.

Concentration difficulties: Research has found that people can have cognitive problems for weeks after stopping Xanax.

Suicidal thinking: The anxiety, stress, and excessive nervousness that can occur during withdrawal can lead to or coexist with suicidal thoughts.

Hallucinations: Although rare, some people have reported that when they suddenly stop using Xanax, they experience hallucinations.

Insomnia: Overtaken by anxiety and stress, individuals who are in withdrawal from Xanax may have trouble sleeping at night.

Mood swings: Unpredictable shifts in mood have been reported, such as quickly going from feeling elated to being depressed.

Nightmares: This side effect of withdrawal is often reported.

Psychosis: Though rare, this may occur when a person stops using Xanax altogether, rather than being weaned off it.

Memory problems: Research shows that long-term Xanax abuse can lead to dementia and memory problems in the short-term. Typically, memory functioning is restored within a few months of the initial withdrawal. READ IP 253 Orange Pill: Everything You Should Know

The following drugs may increase the effects of S 90 3 green Xanax: