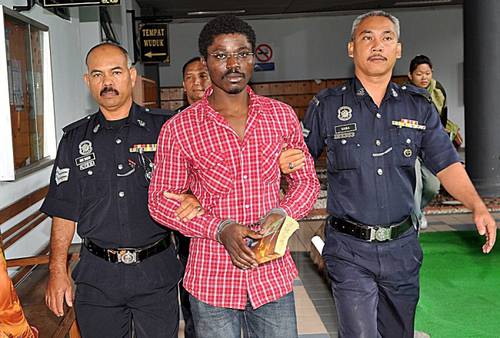 The illegal drug trade or drug trafficking is a global black market dedicated to the cultivation, manufacture, distribution and sale of drugs that are subject to drug prohibition laws. Most jurisdictions prohibit trade, except under license, of many types of drugs through the use of drug prohibition laws. According to Interpol, Criminal networks traffic a range of drugs including cannabis, cocaine, heroin and methamphetamine. As international borders become increasingly porous, global abuse and accessibility to drugs have become increasingly widespread.

The international trade involves growers, producers, couriers, suppliers and dealers. It affects almost countries, undermining political and economic stability, ruining the lives of individuals and damaging communities. The end-users and addicts are often the victims of a powerful and manipulative business. Drug trafficking is often associated with other forms of crime, such as money laundering or corruption. Trafficking routes can also be used by criminal networks to transport other illicit products.

Drug distribution or trafficking laws are determined by federal laws. They penalize the selling, transportation, and illegal import of unlawful controlled substances, such as marijuana, cocaine, heroin, methamphetamines, and other illegal drugs. The punishment for drug trafficking can vary widely depending on several factors including the type and quantity of drugs involved, geographic area of distribution, and whether children were targeted. Sentences for drug distribution and trafficking can generally range from 3-5 years to life in prison but can be substantially higher when larger quantities are involved.

Drug law offenses were a minor problem in Nigeria before the early 1980s. However, trafficking of heroin and cocaine has become a serious social problem in Nigeria in the last few decades and is second only to politics as the country’s most serious social problem. During this period, a whole new market involving supplies of raw materials and a distribution network for the finished product has developed to serve the drug industry. The consequences have been severe; Nigerians traveling abroad are suspected as possible drug couriers, and the United States has put Nigeria on its list of decertified countries. The United States is the single most important consumer of hard drugs that pass through Nigeria.

The effects of drug trafficking and abuse on society and individuals include;

Drug trafficking is a dangerous trade that ruins the lives of both traffickers and their families. The penalties for drug trafficking are usually a jail or prison sentence, fines and supervised release (probation). These penalties often have negative impact on relationship sometimes leading to unwanted consequences. The consequences of illicit drug use are widespread, causing permanent physical and emotional damage to users and negatively impacting their families, coworkers, and many others with whom they have contact.

The risk to children is even greater when their parents or guardians manufacture illicit drugs such as methamphetamine. Methamphetamine abusers often produce the drug in their own homes and apartments, using hazardous chemicals such as hydriodic acid, iodine, and anhydrous ammonia. Children who inhabit such homes often inhale dangerous chemical fumes and gases or ingest toxic chemicals or illicit drugs. These children commonly test positive for methamphetamine and suffer from both short- and long-term health consequences. Moreover, because many methamphetamine producers also abuse the drug, children commonly suffer from neglect that leads to psychological and developmental problems.

The activities of drug traffickers often have very damaging effects on the community. It promotes the get rich quick syndrome promoting illicit trade over hardwork, destroying students and wrecking educational precepts in the process. In many communities play grounds, parks and recreational areas are taken over by the drugs trade and can become no-go areas. National and International studies indicate that high levels of unemployment, lower levels of secondary school completion & a high concentration of social housing can leave communities inadequately resourced to deal with these problems.

In addition, co-workers of drug-addicted people take on additional responsibilities at work to accommodate decreases in productivity. They also work longer hours “covering for” drug addicted individuals who fail to show up as scheduled. Someone working while under the influence of drugs and alcohol is at higher risk of workplace related injury, resulting in increased insurance premiums passed on to employers and co-workers. A loss in productivity affects employers directly, and if drug-use is rampant, can result in loss of the business. Smaller to medium-sized businesses are most at risk of failure resulting from drug related decreases in productivity. Estimates suggest working drug users are a third less productive than their non-drug using co-workers.

The illicit drug industry tends to have some effect on general price levels in either producer or consumer countries, although there are some exceptions. Reports from some countries suggest that the cost of foodstuff increased as a result of greater drug cultivation, with people who are unwilling or unable to integrate into the cultivation of drug plants like coca or opium poppy. A frequent scenario in producer countries is that drug income is either placed on deposit abroad or used for legal and illegal luxury imports, neither of which effects local price levels. If the drug industry does have an impact, it is rather on dampening inflationary pressures, as drug abusers are left with less money to spend on their daily subsistence needs. The major exception to this is real estate, which often tends to be a prime target of the beneficiaries of the drug industry, leading to rapidly rising real estate prices and crowding out other sections of the population.

Many victims of human trafficking are used to ferry drugs across international borders. Popularly known as ‘drug mules’, the victims are made to swallow balloons containing illicit drugs and are then transported across borders. Once they have reached their destination, these balloons are retrieved from the victim’s body. This practice has led to the death of many traffickers. This danger also extends to users of trafficked drugs, a survey produced by the Health & Social Care Information Centre, Statistics on Drug Misuse: England, 2014, reports that there were over 7000 hospital admissions with a primary diagnosis of drug-related mental health and behavioral disorder. There were nearly 14,000 admissions with a primary diagnosis of poisoning by drugs, and there were nearly 2000 deaths related to the misuse of illicit drugs.

If large amounts of illicit drug money are invested in an economy, macroeconomic management becomes extremely complicated. Macroeconomic management is difficult, at the best of times, but with large-scale drug funds circulating in an economy, it becomes an almost impossible task. It is particularly difficult when there is a need for economic policy changes, such as austerity measures to curb inflation and diversify the export base, that drug funds tend to counteract government actions. They do this either by preventing a predicted course of action to materialize, by prolonging the time-frame for macroeconomic stabilization or by prompting governments to take over-drastic measures, thus creating unemployment and social unrest. Studies have shown that money derived from drug trafficking has distorted many national fiscal and monetary policies. With so much additional capital from the drug trade competing with funds from the normal economy, drug money has introduced many more macroeconomic distortions than central banks have been able to handle. Macroeconomic impacts have been felt on foreign exchange flows, aggregate demand and inflation, and, indeed, on economic growth in general.

In 2008, global heroin seizures reached a record level of 73.7 metric tons. Most of the heroin was seized in the Near and Middle East and South-West Asia (39 per cent of the global total), South-East Europe (24 per cent) and Western and Central Europe (10 per cent). The global increase in heroin seizures over the period 2006-2008 was driven mainly by continued burgeoning seizures in the Islamic Republic of Iran and Turkey. In 2008, those two countries accounted for more than half of global heroin seizures and registered, for the third consecutive year, the highest and second highest seizures worldwide, respectively.

In 2007 and 2008, cocaine was used by some 16 to 17 million people worldwide, similar to the number of global opiate users. North America accounted for more than 40 per cent of global cocaine consumption (the total was estimated at around 470 tons), while the 27 European Union and four European Free Trade Association countries accounted for more than a quarter of total consumption. These two regions account for more than 80 per cent of the total value of the global cocaine market, which was estimated at $88 billion in 2008.

For the North American market, cocaine is typically transported from Colombia to Mexico or Central America by sea and then onwards by land to the United States and Canada. Cocaine is trafficked to Europe mostly by sea, often in container shipments. Colombia remains the main source of the cocaine found in Europe, but direct shipments from Peru and the Plurinational State of Bolivia are far more common than in the United States market.

How to Spot A Drug Dealer