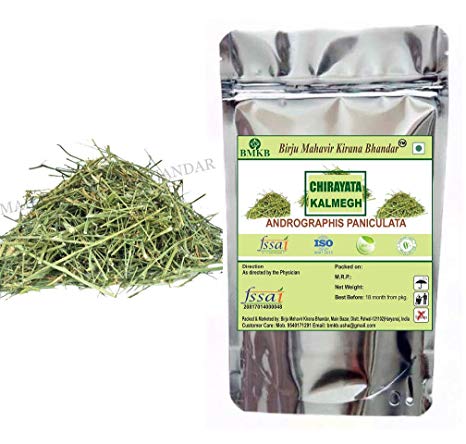 Chirata, also known as Bitter Stick or Chirayta is a medicinal herb plant native to temperate Himalaya. It is used for treating a variety of medical conditions such as:

In India, it is combined with the seeds of Guilandina bonducella (divi-divi ) and used for the treatment malaria. It is also used in manufacturing alcoholic and non-alcoholic beverages.

Anaemia – This herb has the ability to produce blood cells in our body. We have already noticed that Anaemia is the cause of many life-threatening diseases and it is also very common in women as they loose a major quantity of blood due to their menstrual cycle. It takes a heavy toll on their body specifically during and after pregnancy. Chirata can be useful to women except the time of pregnancy.

Anti-parasitic – Chirata is very much useful in eliminating intestinal worm like helminthes, roundworms, tapeworms, flukes etc. from our body. It controls spreading out of parasites in the body.

Cancer Protection – Andrographis Paniculata works as a preventive medicine for cancer with the help of powerful antioxidants. It also helps in recovery of ulcer in the liver and puts a check in forming liver cancer.

Diabetes – Diabetes is a lifestyle disease and it has covered modern generation of the world almost silently. This disease occurs due to improper lifestyle, irregular food habits, mental stress, lack of physical activity etc. Chirata helps to reduce the sugar level present in the blood by stimulating beta cells of pancreas.

Protection of Liver – Chirata has the ability to wash out toxins from our body and also helps to protect the liver with regenerating new liver cells. That is why Green Chirata is called as ‘hepatoprotective’ herb.

In Powdered form, the dose of Chirata is 1-3 grams in divided dose.

In water based decoction/ infusion, the dose of Chirata is 50-100ml in divided doses per day.

Side Effects of Chirata

Although there is scarcity of literature and studies on Chirata, medicinal usage of plant is documented in the American and the British pharmacopoeias including the Indian pharmaceutical codex and in the different traditional systems of medicine (Unani, Ayurveda and Siddha). When taken orally in prescribed quantities the herb is safe. However, the safety of taking chirata during pregnancy or breast-feeding has not been established. In addition, Chirata use by diabetics might lower blood sugar levels in some people and cause hypoglycemia, it also can make ulcers in the intestine worse. SEE: How To Use Chirata In Diabetes