What Will Happen If Hydrogen Peroxide Is Injected Into Someone’s Vein? 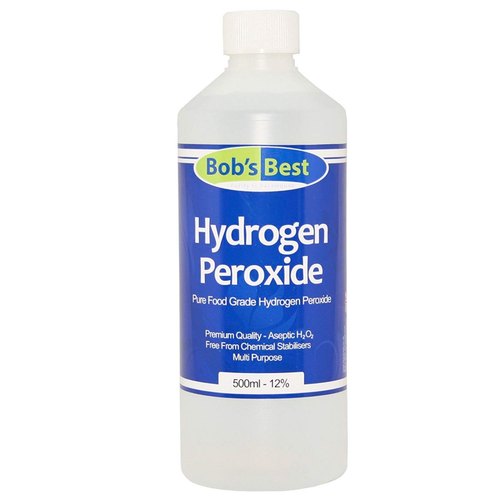 Hydrogen peroxide is a chemical compound with the formula H2O2. In its pure form, it is a very pale blue liquid, slightly more viscous than water. It is used as an oxidizer, bleaching agent, and antiseptic, usually as a dilute solution (3–6% by weight) in water for consumer use, and in higher concentrations for industrial use. Concentrated hydrogen peroxide, or “high-test peroxide”, decomposes explosively when heated and has been used as a propellant in rocketry.

Hydrogen peroxide is a reactive oxygen species and the simplest peroxide, a compound having an oxygen–oxygen single bond. It decomposes slowly when exposed to light, and rapidly in the presence of organic or reactive compounds. It is typically stored with a stabilizer in a weakly acidic solution in a dark bottle to block light. Hydrogen peroxide is found in biological systems including the human body. Enzymes that use or decompose hydrogen peroxide are classified as peroxidases.

Hydrogen peroxide is a mild antiseptic used on the skin to prevent infection of minor cuts, scrapes, and burns. It may also be used as a mouth rinse to help remove mucus or to relieve minor mouth irritation (e.g., due to canker/cold sores, gingivitis). This product works by releasing oxygen when it is applied to the affected area. The release of oxygen causes foaming, which helps to remove dead skin and clean the area.

What is a vein?

A vein is an elastic blood vessel that transports blood from various regions of the body to the heart. Veins are components of the cardiovascular system, which circulates blood to provide nutrients to the cells of the body. Unlike the high pressure arterial system, the venous system is a low pressure system that relies on muscle contractions to return blood to the heart.

What Will Happen If Hydrogen Peroxide Is Injected Into Someone’s Vein?

Injected promptly in a large amount and high concentration, it would kill everything in touch clotting the blood and occluding the vein, which might save your life leaving with a massive wound. Injected slowly it would probably kill the victim. Any amount that would produce more than one small, barely visible bubble if put on a drop of blood would kill you if injected. 70% peroxide, which is as strong a concentration as is available, can cause an explosion if added to less than a teaspoon of organic matter.

Luckily, the strongest concentration you can buy from a pharmacy is way, way weaker. Even that concentration would probably be fatal if as much as half a ml was injected undiluted. Perhaps if the solution was very weak, it might not be fatal. You should never inject hydrogen peroxide into anyone’s vein.

Take special caution to avoid contact with hydrogen peroxide mist. Household-grade concentrations of this chemical are generally considered safe to use, but should never be ingested. Due to these potential hazards, hydrogen peroxide should be handled with care.

When handling moderate-to-high concentrations of hydrogen peroxide in the workplace, ensure eyewash stations and safety showers are accessible, and use splash goggles, gloves, and an approved vapor respirator.

In the event of exposure to hydrogen peroxide, seek medical attention and follow these first aid guidelines:

Keep hydrogen peroxide away from sources of ignition, heat, and moisture, storing in a tightly closed container. Keep away from incompatible materials such as organic materials, metals, acids, alkalis, combustible materials, and oxidizing agents. This chemical must be disposed of in accordance with federal, state, and local environmental control regulations.

Note: FDA has tested the effects of hydrogen peroxide as a food additive and placed it on the Generally Recognized as Safe (GRAS) list.

FDA also has stated that hydrogen peroxide is “safe for use as an oral wound healing agent.

ALSO READ: What Happens When You Inject Air Into Your Veins?

What Will Happen If I Drink Hydrogen Peroxide?

What Would Happen If You Inject Water Into Your Body?