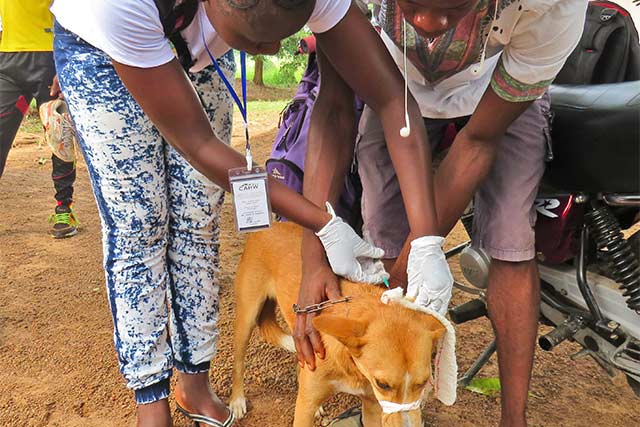 Rabies is a viral infection spread via saliva through the bite of a rabid animal; it is caused by the virus neurotropic lyssavirus. It is an acute, central nervous system infection, characterized by central nervous system irritation, followed by paralysis and death. Rabies is more prevalent in the developing world than in industrialized countries. Approximately 55,000 people die each year from rabies. An estimated 10 million people receive post-exposure prophylaxis each year after being exposed to animals with suspected rabies. The highest risk of human infection is from rabid dogs (Accounting for about 94% of the confirmed diagnosed cases).

Rabies was first reported in Nigeria in 1912 and about 10,000 annual human cases are reported in the country making the disease a persistent endemic problem. The rabies viral antigen has been detected in the brain tissues of apparently healthy dogs slaughtered for human consumption in almost all geopolitical zones of the country and poses a significant public health risk to dog meat processors and handlers. It has also been diagnosed in bats, horses, monkeys, cats, and cows.

For a significant reduction in the incidence of human rabies in Nigeria, a concerted effort must be made to control the stray dog population in the urban and rural areas. We must thoroughly educate the people on the need for the proper care of their dogs including annual vaccination. Above all, each of the above-mentioned points must be tackled scientifically and systematically.

For centuries, humans have felt terror after getting bitten by rabid dogs. But one has to take a mighty leap into the past to realize that until the 19th century, there was no accurate diagnosis of the disease in humans or animals, no isolation of the infectious agent, no animal control, and no human treatment. The role of wild animals in transmitting rabies was recognized by Celsus. Many of the histories of violent outbreaks in wild animals and the resultant human cases involved wolves.

The history of rabies research is itself pretty interesting. Georg Gottfried Zinke demonstrated that rabies was caused by an infectious agent. In 1804, he showed that the disease could be passed from a rabid dog to a healthy one. Then, the disease could be transmitted from that dog to rabbits and hens by injecting them with the dog’s saliva. By the 1880s, Louis Pasteur became interested in rabies . Pasteur realized that if spinal cord samples from infected rabbits were air-dried, the virus contained in the samples became less virulent – attenuated, as it were.

This discovery prompted Pasteur to concoct the first rabies vaccine, and he showed it to be effective in dogs. Next, he turned it up to 11 by treating 9-year-old Joseph Meister. Pasteur and Meister’s physician treated the boy with an emulsion of rabbit spinal cord containing the attenuated rabies virus. After a lengthy regimen of injections, the boy was declared healthy and rabies-free 3 months later. Pasteur went on to treat some 350 patients for rabies from Europe, Russia, and America.

Animals with rabies transfer the virus to other animals and to people via saliva following a bite or via a scratch. However, any contact with the mucous membranes or an open wound can also spread the virus. While human-to-human transmission of the virus is extremely rare, there have been a handful of cases reported following transplantation of corneas. For humans who contract rabies, a bite from an unvaccinated dog is by far the most common culprit.

Following a bite, the rabies virus spreads through the nerve cells to the brain. Once in the brain, the virus multiplies rapidly. This activity causes severe inflammation of the brain and spinal cord after which the person deteriorates rapidly and dies.

It usually takes 4 to 12 weeks for a person to develop rabies symptoms once they’re infected. However, incubation periods can also range from a few days to six years.

The initial onset of rabies begins with flu-like symptoms, including fever, muscle weakness, tingling. You may also feel burning at the bite site. As the virus continues to attack the CNS, there are two different types of the disease that can develop.

Paralytic Rabies: this form of rabies takes longer to set in, but the effects are just as severe. Infected people slowly become paralyzed, will eventually slip into a coma, and die. According to the WHO, 30 percent of rabies cases are paralytic.

There is no test to detect the early stages of rabies infection. After the onset of symptoms, a blood or tissue test will help a doctor determine whether you have the disease. If you have been bitten by a wild animal, doctors will typically administer a preventive shot of rabies vaccine to stop the infection before symptoms set in.

Getting a rabies vaccination as soon as possible after an animal bite is the best way to prevent the infection. Doctors will treat your wound by washing it for at least 15 minutes with soap and water, detergent, or iodine. Then, they’ll give you the rabies immunoglobin and you’ll start the round of injections for the rabies vaccine. This protocol is known as “post-exposure prophylaxis.”

Animal control will probably try to find the animal that bit you so that it can be tested for rabies. If the animal isn’t rabid, you can avoid the large round of rabies shots. However, if the animal can’t be found, the safest course of action is to take the preventive shots.

As rabies is preventable, the following simple measures can help keep you safe:

Barking  is not a common presentation of rabies, Once  Rabies virus enters the brain and starts to form these symptoms,  the chances are survival from Rabies are small and the patient dies